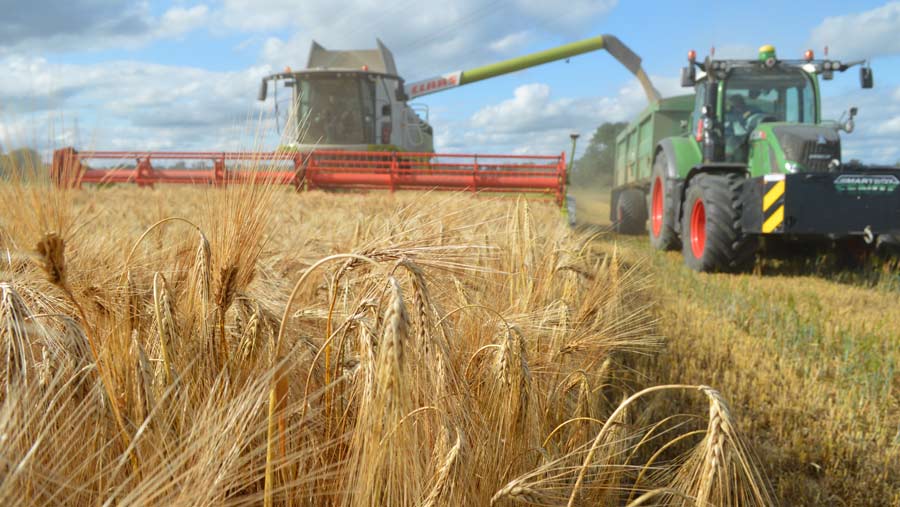 The highest-yielding hybrid winter barley variety on heavy land will be widely available for drilling this autumn, with the added benefit of being the earliest to harvest.

The six-row Thunderbolt from breeder Syngenta, which gained a place on the AHDB Recommended List late last year, shows a yield advantage over all other hybrids on strong land, but is slightly weaker in the straw.

Hybrid barleys make up about 35% of the 350,000ha of winter barley in the ground, and this total winter crop area could rise this autumn due to high current feed barley prices.

Paul Roche, the group’s seeds technical manager, says heavy-land farmers can expect a 1.06t/ha yield lift compared with control varieties on the Recommended List, and this will mean an extra £191/ha at current barley prices.

“Thunderbolt stands out for its high yields on heavy land, in combination with its good grain quality,” he told a company briefing.

The variety shows a heavy-land yield of 111% compared with fellow hybrids Belfry on 110% and Kingsbarn on 108%, and leading two-row barleys Hawking at 107% and Orwell at 103%, according to the Recommended List.

It has performed well in the north and west of the UK, although its overall fungicide-treated yield at 107% is similar to the older hybrids Kingsbarn and Belmont.

Another aspect to appeal to growers is that it is the earliest to mature of all winter barleys, alongside fellow Recommended List newcomer Kingston, and matches the very early-maturing conventional six-row variety Funky.

It has a strong set of disease resistance scores, with an 8 for mildew, which Mr Roche says may allow growers to avoid a specific mildewicide spray, a 7 for brown rust and 6s for rhynchosporium and net blotch, on a 1-9 scale where 1 is susceptible and 9 shows good resistance.

However, it has the lowest score for resistance to lodge among the hybrids, with a 6, with all other hybrids on 7s and Belfry an 8. Mr Roche says Thunderbolt will “need to have a programmed plant growth regulator approach”.

The Recommended List illustrates that Thunderbolt shows 37% lodging without a plant growth regulator (PGR), compared with Kingsbarn at 13% and two-row Orwell down at 2%, emphasising the need for PGRs with Thunderbolt.

It has all the general attributes of hybrids, showing very good competitiveness against blackgrass and other grassweeds, and reflects the improving trend in specific weights, with a value of 69.6kg/hl, similar to other leading hybrids.

In addition, like all hybrid barleys it has a larger root system than conventional barleys, which may enhance scavenging for nutrients and water, and this could give great resilience during extreme weather and as growers move towards improving soil health and reducing inputs.

Sarah Hughes, the group’s hybrid barley marketing manager, says there should be plenty of seed for this autumn’s drilling season, and the group is keeping the price of seed unchanged from the previous season. This means hybrid seed will cost about £110/ha, compared with £85/ha for conventional barley seed.

She estimates the winter barley area could edge higher this autumn due to higher grain prices and increased interest in oilseed rape, with winter barley being an excellent entry crop for early-drilled rapeseed.