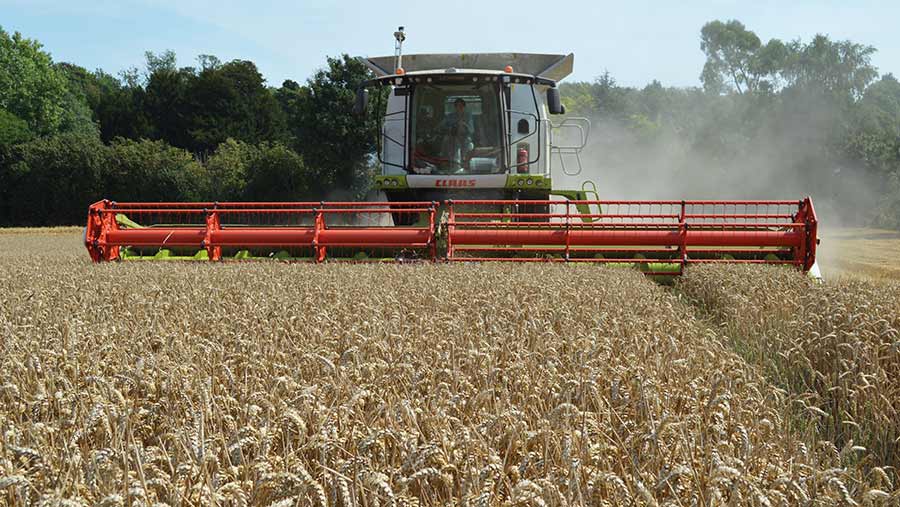 Cereal and oilseed rape varieties with improved disease resistance which may allow growers to cut costs, as well as give higher yields, were given the official approval for future drilling plans.

Wolverine, the first winter wheat with resistance to an aphid-spread disease was the star of the new varieties included in the latest AHDB Recommended Lists (RL) of cereals and oilseed for 2021-22.

The variety, resistant to barley yellow dwarf virus (BYDV), comes at a time when more aphids are being seen in mild autumns, insecticide seed dressing are banned, and sprays often ineffective.

The list also includes a multitude of new higher yielding biscuit wheats, spring and winter two-row barleys with improved yields, and a slew of oilseed rapes with better levels of disease resistance.

Paul Gosling, who manages the RL for the AHDB, said Wolverine is being added to the list in a specialist category, although its yield and disease package does not quite match leading varieties.

“It includes a very valuable trait, as with seed treatments banned growers are struggling to control BYDV in mild autumns,” he told a briefing.

Cereal rust disease ratings are being reset, with a greater weighting given to the most recent year within three years of data. This has caused popular varieties like Skyfall to drop two rating points for yellow rust resistance to a 3 and Kerrin three points to a 4, in a 1-9 scale where 1 is very susceptible and 9 shows goods resistance.

Wolverine, a hard-milling feed wheat from breeder RAGT, is the first wheat to be included in the new specialist BYDV-resistant category, and there should be plenty of seed for drilling in autumn 2021.

Its fungicide-treated yield is only 3% behind the top-yielding feed wheat variety Skyscraper, while Mr Gosling said it has  “slightly disappointing” resistance ratings of 5.3 for septoria, compared with top-rated varieties such as Extase (8) and Theodore (8.2), and 5 for yellow rust, and this may put off some growers.

Wolverine has a  similar treated yield to the popular variety Graham at 102%, but its untreated yield of 72% compares with Graham’s 87%, illustrating its poorer general disease ratings.

This is the second autumn cereal growers have drilled without now-banned neonicotinoid seed dressings, and many are reluctant to use contact pyrethroid insecticides against aphids due to resistance problems and affecting beneficial insects, so this genetic solution has drawn much interest.

Jim Knight, seed business development manager at agronomy group Frontier, said the real bonus with the variety is it gives a good trait with no major hit to yield, and also is a good variety to drill early with a slow early growth pattern.

“Growers looking to integrate this variety on their farms will not have to sacrifice yield in a big way,” he told Farmers Weekly.

His group grew 190ha of Wolverine seed crops for harvest 2020, yielding 8.4t/ha compared with 8.1t/ha for the 3,000ha of all its seed crops of wheats, and he forecasts there will enough seed for 5-6% of the total wheat crop next season.

“It gives a decent yield, but it is a little weak on yellow rust, and has had a reasonable uptake by the seed trade,” he added.

The second hard-milling feed wheat recommended is Cranium from breeder KWS with a treated yield of 104%, just 1% below the highest wheat variety, and with an especially good yield from late drilling as it shows vigorous early growth after sowing.

Dr Gosling said its yield when sown after 1 November stands out, and it will interest growers who look to delay drilling to control troublesome blackgrass. It has a reasonable disease package – with a yellow rust resistance score of 8 and septoria 6 – and a good specific weight of 75.4kg/hl.

“The variety shows a high level of yellow rust resistance and an especially good level of resistance at the seedling stage for the disease,” said Mr Knight.

Five new biscuit-makers tumbled onto the list in this relatively small category with four from Limagrain – Prince, Illuminate, Quasar and Astronomer, and then Merit from Elsoms – all with resistance to orange wheat blossom midge.

Prince gives a group-leading treated yield of 103%, good disease resistance (septoria 7.1), but its specific weight is a little low at 74.8kg/hl so it may favour fertile heavy land sites.

Illuminate is a touch behind on yield (102%) offers a better specific weight at 76.6kg/hl and a good disease package. Its early maturity, distilling potential and better septoria resistance (7) than the popular Barrel (4.2) may attract northern growers.

Quasar offers a similar package to Illuminate with slightly lower quality, while Astronomer, though a little behind in yield (101%), gives a good septoria resistance of 7.4 and an impressive specific weight of 77.8kg/hl, although a mildew score of 4 and a low northern yield may limit its appeal.

Mr Knight said the variety has given a good performance across England with strong rust and septoria scores, while Mr Barker added that it is his pick of the bunch of new biscuit wheats.

The final biscuit wheat, Merit, is recommended for the eastern region where its yield is especially good with a specific weight of 76.5kg/hl, although its disease scores are let down by a 3 for mildew.

The eighth new wheat is the soft-milling feed variety Swallow from Blackman Agriculture, and marketed by Senova,  which is recommended for the north due to its relatively early maturity and good yield. In addition, it has comfortably outperformed all other varieties in 2020 distilling tests.

“This is a variety which will be attractive to growers in the north, due to its distilling potential and early maturity,” said Dr Gosling, although it has a slightly weak disease package with a 5 for mildew and a 5.7 for septoria.

On the revised rust ratings on the list, he points out that there is no evidence of a shift in races, but  adjustments have been made to reflect commercial situations. This sees yellow rust rating for varieties such as Zyatt, Insitor, Gleam and Shabras drop from 7s to 5s, and the brown rust rating of Firefly fall from a 6 to 5.

Tardis comes from the same stable as Hawking, Gimlet, Orwell, Tower and Glacier, with a specific weight of 69.1 kg/hl and good disease rating, especially to rhynchosporium at a 7, with only Jordan and Surge having 7s among the two-row feed varieties.

Bolton also has a good specific weight (68.6kg/hl) and disease package, while Bordeaux has an even better specific weight (69.9kg/hl), but its ratings of 4s for rhynchosporium and net blotch might deter growers in the wetter regions in the north and west of the country.

Tardis and Bolton show similar good straw stiffness to the popular variety Orwell, while all three show better specific weights than Orwell (68.1kg/hl), and these three new varieties are showing yields on a par with some of the the six-row hybrids.

Two new six-row hybrid feed varieties, Kingston and Thunderbolt from the breeder Syngenta, are added to the list and show the same treated yield (107%) as market leading variety Kingsbarn.

“These varieties are showing good increases in disease resistance and earliness although not in yield,” said Dr Gosling.

“Early maturing barleys were hit by the drought last spring, but Kingston did well and came out as the highest yielding for the year 2020,” said Mr Knight. Kingston failed to get on the list in 2019, but had a good year in 2020. 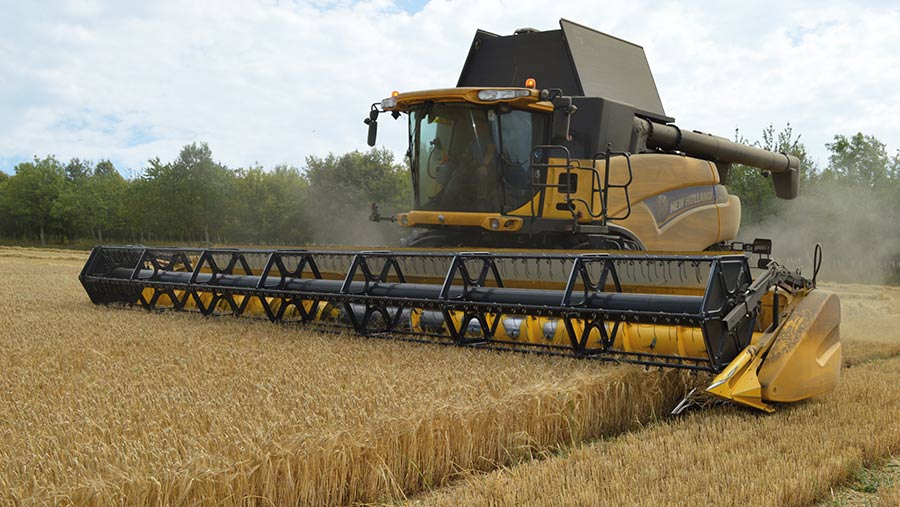 New malting spring barley Skyway was added to the list with a treated yield 3% above the next highest variety, and it also showed the top untreated yield, suggesting good disease resistance despite limited data.

The variety comes from Danish breeder Nordic Seed with the UK breeder’s agent being Agrii, and it shows a very good specific weight at 68.7kg/hl.

“Skyway could be a very popular variety depending on its malting approval,” said Dr Gosling.

The success of the variety, as with other malting varieties, will depend on its malting qualities in commercial situations and it is only likely to come up for approval by the maltsters in May 2022.

New malting varieties usually take a year or two to be approved by the maltsters and be grown widely, and next spring’s plantings are likely to be dominated by Planet, Laureate and Diablo, with perhaps some Tungsten coming through.

The second variety to be recommended is feed variety Cadiz from breeder Senova, with a treated yield equal to Fairway at 103%, but a higher untreated yield at 94%. It has a good specific weight at 67.4kg/hl. 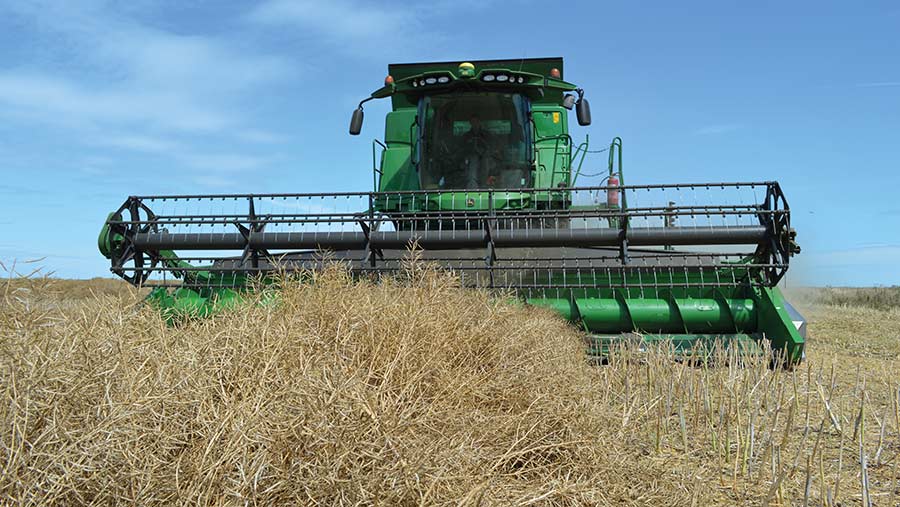 Five new winter oilseed rape varieties, all hybrids, were recommended, with Aviron, from Limagrain, recommended for across the UK, and matching the previous top yielder Ambassdor for gross output at 108%. It has good disease resistance, including turnip yellows virus (TuYV) and also pod-shatter resistance.

Also recommended for the East/West is Expectation from Bayer’s Dekalb with a gross output of 107%, an 8 score for stem canker resistance, in addition to TuYV and pod-shatter resistance.

A further East/West recommendation is Respect from LS Plant Breeding, with a gross output of 106% and a stem canker resistance of 8, but it does lack TuYV and pod-shatter resistance.

The final addition is Clearfield herbicide-tolerant Imprint CL from Dekalb, with a UK recommendation and a gross output of 95%. Stem canker resistance is good (8) and it features pod-shatter resistance, but does not have TuYV resistance.

Dr Gosling pointed out that 80% of varieties on the new list are hybrids and more than a third have TuYV resistance, while pod-shatter resistance is included for the first time.

Mr Knight is focusing on two of the new entrants, Antigua and Expectation, impressed by their vigorous growth in the autumn to grow away from flea beetle attacks.

“Antigua was particularly vigorous in the autumn and 2019 showed that those varieties that got going well did well in yield terms,” said Mr Knight.

Expectation is the first from the breeder with TuYV resistance, which is added to the breeder’s pod shatter resistance and good phoma resistance, and shows good vigour in the autumn and spring.

However, Beckii Gibbs, seed sales manager at United Oilseeds, said there is little in the new list better than two of last year’s new entrants from Limagrain – Acacia and Aurelia – and her group will be focused on selling those next summer.

The one new addition to the spring wheat list is hard-milling group 4 feed variety Escape, from LS Plant Breeding, which showed a treated yield of 107% compared with Talisker at 105%.