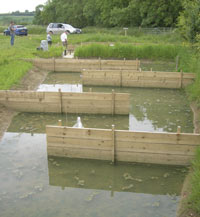 Concern over diffuse pollution is increasing as the practical implications of the EU Water Framework Directive become clearer. But a simple method of limiting the loss of sediment and phosphate from field drains is proving its worth.

Buffer pools, fed by field drains, are being evaluated by the Game and Wildlife Conservation Trust at its Allerton Project farm in Loddington, Leicestershire. Initial findings show the pools can reduce phosphate concentrations in watercourses by as much as 50%. Those results have prompted DEFRA-funded research into field corner buffer pools, situated so that they don’t impinge on productive land.

Allerton Project head of research Chris Stoate said the soil particles get into water from arable land by two routes. “There’s the visible surface run-off, which tends to occur during heavy rain in the autumn after cultivations, and there are also field drains. Both make a contribution.” 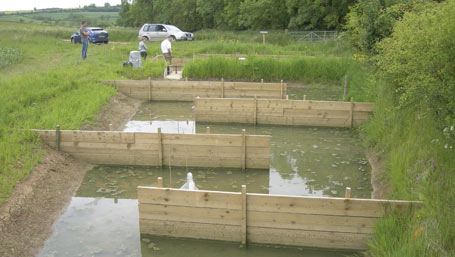 While surface run-off tends to carry more soil than drain water, drains flow for a longer period of time and contribute sediment more frequently, Mr Stoate added. “We’ve measured phosphate concentrations in field drains of up to 1mg/litre when it’s raining,” he said. “And that’s more than 10 times the amount that has an ecological impact in streams.”

Phosphate is a particular concern as it attaches to soil particles and limits plant growth in fresh water. Sedimentation is also a problem, for example starving fish eggs of oxygen. “We surveyed the brown trout population [of the Eye Brook] in 2004 and 2008,” said Mr Stoate. “Numbers of young fish were very low. The population is just hanging on.”

A series of pools, containing water diverted from drains and a ditch, were created at Loddington more than a decade ago, and their water quality and biodiversity benefits were monitored. This pilot study suggested that phosphate concentrations could be halved by the pond system, while birds, water-living insects and other wildlife also benefited.

The buffer pools work by slowing down the passage of water, so sedimentation occurs in them rather than the stream. At Loddington, two new pools have been sited in an unproductive field corner, causing minimal disruption to cropping and the day-to-day operation of the farm.

“This is very important,” said Mr Stoate. “Our intention is to find ways to incorporate this type of feature into an existing field margin or boundary so that they are a simple and effective solution rather than an inconvenience or an expense.”

Clare Deasy of Lancaster University, who manages the research project, said water depth and particle content of the ponds is monitored continuously, with water sampling for phosphate analysis taking place after storms.

“These rainfall events cause soil to be washed off the land and nutrients to move,” she said. “Most losses occur during winter, when soils are wet, although summer thunderstorms may also be important.”

Evidence from Norway, where constructed wetlands are used widely, is encouraging, she added. “There, about 60% of soil particles and 40% of phosphate are removed from the water in the wetlands. Our expectations for this type of feature are high and we’re trialling different sizes and pool designs to make sure they’re effective.”

Buffer pools require little on-going management, said Mr Stoate. “Occasionally, the sediment has to be removed and returned to the land, but that’s about it.”

Ms Deasy said sediment can be used as a fertiliser and its phosphate value will be assessed in the project. Shallow in depth, a simple series of pools can be created in a about a day with a digger for a minimal cost, she said.

“There’s also a biodiversity benefit of having wetlands on the farm,” said Mr Stoate. “A related project here looked at the value of smaller pools in field boundaries and found that both birds and aquatic insects benefitted.”

This is just the start of the project and there is much more to learn about the design and operation of buffer pools, added Mr Stoate. “Two sites are being installed by Lancaster University on the trust’s farm at Loddington this autumn, as well as seven elsewhere in the UK. The project will run for at least another two years.”

He added that buffer pools alone will not solve the problem of diffuse pollution. “The plan is to use them in combination with other practical measures, such as minimum tillage and buffer strips.”