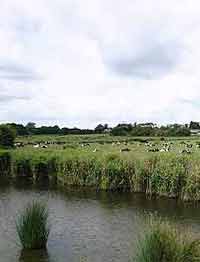 Growers are being urged to think ahead and create buffer strips to help keep pesticides out of water.

is being promoted as part of the H2OK? Campaign.

But for best effects the strips need to be well-established by next autumn. Buffer strips will also generate ELS income and help meet the aims of the Campaign for the Farmed Environment.

Andy Bailey, Dow AgroSciences’ principal biologist, says: “Studies show that a well-established grass strip of 6m or more will significantly reduce the loss, by run-off, of herbicides used in winter oilseed rape or winter beans by more than 50%.

“Paying attention to soil and weather is also important to avoid loss through drainage.”

“Within an ELS agreement, including permanent 6m buffer strips is worth 450 points/ha.

“Even outside ELS, buffer strips should be recorded as part of the voluntary measures target within the CFE.”

This autumn is the ideal time to be planning for winter oilseed rape and winter bean plantings next autumn, because for best effect, buffer strips need to be well established.

Patrick Goldsworthy, Voluntary Initiative manager, urges growers to work with their agronomists to identify fields that pose the most risk and find steps to reduce run off.

“Grass buffer strips will help reduce run-off but changes in rotation and compromises in weed control may also be needed,” he adds.

Independent AICC agronomist Patrick Stephenson says around 30 of the 40 growers he advises have established buffer strips along watercourses.

“Watercourses are done by the majority of growers now, but only a minority do additional buffer strips where there is a risk of erosion to root crops,” he says.

The potential for erosion on soils with potatoes, carrots or sugar beet is greater, he adds, and therefore more buffer strips should be established around these crops.

Rachel Evans, an AICC agronomist who works in Kent, Surrey and Sussex, has been advising her growers to sow seed mixture in their buffer strips.

“I have been encouraging growers to sow pollen and nectar mixes in their buffer strips, especially in wider strips, because they are good for the wildlife and stop run-off better,” she says.

Leaving buffer strips to grow with natural vegetation can encourage the growth of grass weeds like wild oats, brome and blackgrass, she points out.

Around half of the 18 growers she advises are serious about regularly maintaining their buffer strips. Several are renewing their ELS agreements and looking at establishing new strips to collect points.

For details on how to create buffer strips beside watercourses, visit the website www.voluntaryinitiative.org.uk