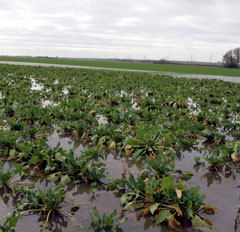 Cereal growers preparing for the coming growing season may need to rethink their disease control strategies, according to joint advice from plant breeder KWS and chemical company BASF.

One of these is that backward, poorly established wheat could go straight to T1 once it starts growing.

“The past two years have reinforced the value of the T0 spray, both for its yield contribution and its role in improving timeliness,” he says.

“However, growers shouldn’t get hung up on the yield benefit. The reality for many is soil conditions are so poor that they won’t be able to travel for quite some time. And then they’ll still have their grassweed control to complete.”

This means that the role of the T0 will be questioned this season, he acknowledges. “The practicalities of getting round are likely to be far more of a problem than any concerns about the cost of the treatment.”

Matching varieties to the correct agronomic approach will be important, Mr Simons adds. “A variety like Oakley, which accounts for 15% of the acreage, needs a comprehensive disease programme for maximum yield. So it’s one which really should get a T0.”

Cordiale and Robigus are others, he says. “Cordiale is a priority because it is an early variety, while Robigus needs this approach because of its yellow rust risk.”

For all varieties, including the new Group 4 Viscount, septoria will be the main disease threat, he predicts. “But mildew could also be a problem this spring. Later drillings are at greater risk from mildew and many varieties are more susceptible as young plants.”

The use of early nitrogen on backwards crops will fuel mildew, while warmer weather will accentuate its development, he adds. “Don’t overlook it and keep an eye on Humber. In this situation, metrafenone-based fungicides will be useful.”

Another consideration this year is the evidence that thinner canopies and smaller plants benefit more from early sprays, notes Mr Simons.

“In small plants, more of the yield contribution comes from the lower leaves. So these need to be protected, especially where you’re trying to build the canopy up.”

His advice is that the T1 spray will need to be robust enough to give this protection, especially if the T0 was omitted. “Agronomists are going to really earn their money this year. The reality is that growers must get yield from their crops or they won’t see any profit.”

Mr Simon’s final point is on eyespot. “There’s been a lot of the disease around in the last two years, especially in early-drilled first wheats.

“But the amount of rain that we’ve had could bring eyespot into more crops this year. Growers will need to make a judgement and use the appropriate fungicides at T1 where it is perceived to be a risk.”

Some crops will run very quickly through to T1 this year, but that shouldn’t affect spray programmes unduly, believes Graham Hartwell of BASF.

“The need for a T0 spray is questioned every year,” he says. “But we know from experience that this early treatment buys some time and limits any damage if the weather then shuts down afterwards.”

Yield responses from T0 sprays were 0.2-0.25t/ha in BASF trials last year, he reports. “So it did much more than just provide insurance.”

Where it isn’t possible to apply a T0, the T1 spray will need to deliver both curativity and persistence, he stresses.

“This is where the new fungicide Brutus (epoxiconazole + metconazole) will have a valuable role. It fits very well at the T1 timing and will help with difficult situations.”

He agrees that septoria control will be the key objective in 2009, but also recognises the mildew threat to small plants.

“Eyespot is the unknown. Much will depend on how crops come out of the cold snap. If you’ve got a known varietal weakness to the disease, then the right choice of fungicide at T1 is essential.”

All wheat varieties respond to fungicides, although there was a 1.65t/ha difference between the highest and lowest responses last year, reports Mr Hartwell. “The Group 3 and 4 varieties gave the highest response, with Oakley, Viscount and Robigus being the best.”

Overall, the average response to fungicides at BASF’s Rawcliffe Bridge trials site was 3.34t/ha, he notes. “That represents a 3:1 return on your investment.”