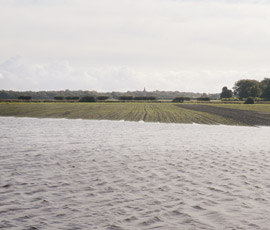 Heavy rain is again causing headaches for our Crop Watch agronomists this week, with field work stopped in its tracks and oilseed rape establishment threatened.

Perhaps the most dramatic evidence of this can be seen in Lancashire and Cheshire, where independent agronomist Paul Sweeney has seen burst river banks. “There are hundreds of acres in the Lancashire mosses with crops not harvested and flooded badly,” he says.

“So far, I know of only six fields sown with wheat and oilseed rape plantings were equally a nightmare. Only half of growers got anything in, and among those plantings were 30% down.

“Probably another 30% will fail, or has gone under water so the saying is true – it’s grim up north,” he adds.

A little further south, Shropshire agronomist Bryce Rham has fared somewhat better, with nearly all oilseed rape drilling completed, but the protracted drilling window has left his crops at various growth stages. “Seed-beds have in the main been very good, but I now have rape that is anywhere from cotyledon to six true leaves. It’s a good reason to hope for a mild and dry month.”

Phoma leaf spot risk in oilseed rape remains high, and although symptoms are yet to appear for Agrovista advisor Tim Bullock, he expects to start seeing evidence of infection this week. “It has been present on volunteers since early September,” he notes.

“The threshold for treatment is 10% of plants showing symptoms and with crops being so small this year it will only take a few days for lesions to grow down to plant stems, so don’t delay with an application of Captain (flusilazole).”

“So far, I know of only six fields sown with wheat and oilseed rape plantings were equally a nightmare. Only half of growers got anything in, and among those plantings were 30% down.”
Paul Sweeney

In the east, Marion Self, agronomist for Prime Agriculture in Essex, Suffolk, and Cambridgeshire was pleased with the moisture provided by recent rains. Good seed-beds had been difficult to achieve after a prolonged dry spell.

“The rain has made the ground easier to work and more friable and that will help maximise the efficacy of pre- and peri-emergence herbicides.

“Blackgrass will soon emerge and early completion of these sprays, before their targets have come through, will also help to improve efficacy. Herbicide choice will vary on the situation, but most will include flufenacet at pre- or peri emergence,” she says.

With the high levels of barley yellow dwarf virus experienced last season, the control of it’s aphid vectors is something at the forefront of Ms Self’s mind and she believes that most

“It is important to note that for mid-September sown crops Deter will only give eight weeks protection, after which a foliar top-up may be required.

“Those relying solely on foliar applications will need to protect crops as soon as they are green. Patchy emerged crops may require two early applications to protect backward patches,” she concludes.

The potato crop in Scotland has failed to make a Ryder Cup style comeback, says SAC senior potato consultant Matthew Smallwood, despite some late September sunshine. “There has been a north/south divide though, with crops north of Aberdeen faring much better with lower rainfall through the season.”

The early senescence and high starch levels, due to the unexpectedly high dry matters, could lead to a high risk of bruising this year, notes Mr Smallwood.

“Tubers can become hyper sensitive, and sensitivity can change within hours so I would advise growers to check bruising levels before harvesting a field by performing drop tests,” he says.

See photos of the wet weather woes and Marion Self discussing oilseed rape establishment in Suffolk in our Crop Watch blog.

Click here for more on the delayed drilling this autumn.