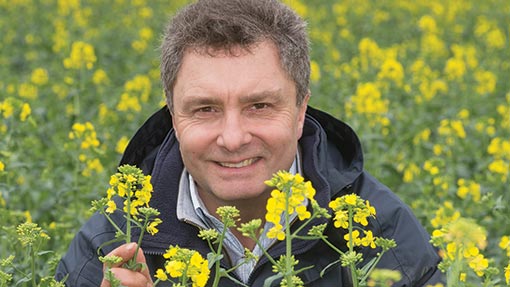 Breeder Bayer CropScience has high hopes that its autumn-sown hybrid variety will make the HGCA Recommended List later this year with an oil content nearly 1% above its fellow variety Harper.

Adrian Cottey, the group’s UK seed manager, said this advantage in oil content could be worth about £7/t to a farmer’s rapeseed price.

“Growers should be looking at yield, but they also need to look at oil content as this tends to be less volatile,” he told Farmers Weekly at the Cereals Event.

Mr Cottey added that Fencer had the vigorous growth of a hybrid, with high phoma disease resistance, good standing power and an output above Harper.

The German group is the world’s number one hybrid oilseed rape seed company, and Harper was its first variety to make the HGCA list last year and it has high hopes for Fencer this year.

Fencer has a gross output of 105% of control compared with Harper at 103%, and an oil content of 46% set against Harper’s 45.1% – a useful advantage when rapeseed prices have slipped nearly £30/t in the last two months.

Fencer also has a high phoma resistance score of 8 compared with Harper at 9, and Mr Cottey said this meant growers did not have to spray more than once for phoma in the autumn with these varieties.

Bayer’s oilseed rape breeding effort is focused on hybrids as the group says it is easier to introduce better disease resistance and pod shatter resistance into the varieties.

“For the grower, hybrids are easier to manage than conventional varieties,” he said.

The hybrid’s vigour growth in autumn could be useful in limiting the number of pyrethroid sprays needed to control pests in a non-neonicotinoid seed treatment future, while strong growth in the spring will help these hybrids recover from pigeon damage.

Fencer will have limited seed available this autumn, probably only enough to drill less than 1,000ha, but Harper should be freely available, and Mr Cottey said he hoped the variety will take a 5% share of the market.