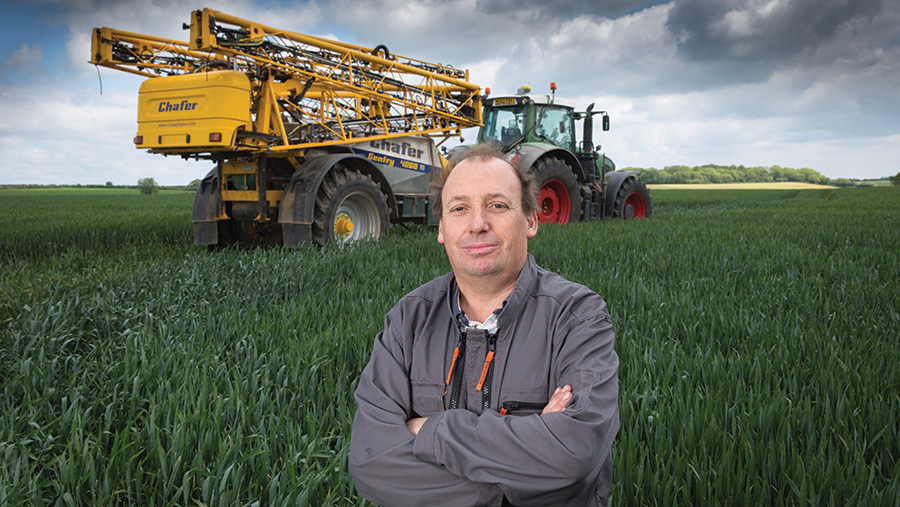 It’s a measure of John Martin’s determination to “get things right” that he would rather apply herbicides and fungicides in separate applications if a single application tank mix is likely to compromise either treatment.

And any blackgrass daring to show its face on his 320ha (800 acre) all-arable farm in Dorset will quickly be taken by the scruff of its neck and stuffed into a hand-roguing sack.

“That bag and a knapsack sprayer are among my most important bits of equipment,” says Mr Martin. “Any blackgrass I find gets pulled out and put in the bag and if there’s a clump I’ll spray it off with glyphosate; you have to be religious about dealing with it.”

Other strategic measures taken against the weed have included grazing cattle for 10 years on a badly infested 20ha of new ground before turning it over to arable production and insisting on a contractor’s combine being washed – not just cleaned – down before it comes on the farm.

As a consequence of this obsessive approach, the Syngenta Farm Sprayer Operator of the Year title winner in 2015 says there is hardly any blackgrass on the farm – and he intends keeping it that way.

Control measures start in the autumn with cultivation to achieve a fine seed-bed and rolling to eliminate as many clods as possible, thereby minimising the soil surface area, avoiding the spray shadowing effect of a clod and reducing as far as possible the release of any seed holed up in clods before they crumble from weathering.

“Bare ground is one of the most difficult targets to hit without the spray going off target,” he notes. “So the 03 Defy nozzles I use at this stage, which are the only non-air induction nozzles in my collection, are arranged on the boom alternating forwards and backwards.”

This shows Mr Martin has taken on board the argument that arranging nozzles so they create a solid curtain of spray causes a “bow wave” of air that breaks up the spray sheet such that the fine droplets are taken away as drift.

Alternating nozzles like the Syngenta Defy, which produces an 83˚ jet angled forwards from vertical, creates openings that the air can pass through.

“Avoiding drift is a high priority so although my target working speed is 12kph, I’ll drop to 10kph if the wind speed is a bit marginal,” he says.

“This has the effect of producing a slightly coarser spray as the pressure drops to compensate, but the sprayer’s auto boom height system works best at this speed – and keeping the boom low and stable also helps avoid drift.”

The Defy tips are also selected on the triple nozzle holders for aphicides in the autumn and for grassweed herbicides applied in spring, when a bit of forward movement helps the fine droplets penetrate to the bottom of the crop.

Applying a fungicide at the same time would clearly avoid the time and cost of individual treatments: “But then you have to decide which treatment to compromise,” says Mr Martin.

“Using, say, an extra 0.6 litres/acre of diesel is a small price to pay compared with the cost of an imperfect fungicide or herbicide treatment,” he argues.

“It’s one of the reasons we use a comparatively large sprayer for our acreage – it means I have sufficient capacity to go in the best conditions and at the optimum timing for each treatment; it’s all about attention to detail.”

The sprayer in question is a trailed 4,000 litre Chafer Sentry equipped with a 36m boom. Up to four years ago, the farm ran a Cleanacres Airtec twin fluid sprayer with active air injection, but now many of the principles of that technology are provided by air induction tips.

“My number one choice is the 03 Guardian Air Twin – but I’ve never used it,” says Mr Martin. “It should work really well but I’m concerned the orifices are just a bit too small to work reliably, so to play safe I settle for the 04 size.”

The Hypro Guardian Air Twin is a one-piece nozzle producing two 110˚ flat fans angled 30˚ forwards and backwards. Apart from the convenience of its one-piece design, the nozzles produce a slightly smaller droplet size spectrum at a given flow and pressure compared with the single Guardian Air.

In fact, it has the finest droplet spectrum of any air induction tip on the nozzle selection chart published by AHDB Grain & Oilseeds.

That helps with crop penetration, according to trials and user experience, especially deep into oilseed rape for disease control, and as with all air induction nozzles, small bubbles make the droplets more likely to collapse than bounce upon impact with the plant, resulting in good coverage and distribution of the active.

The relatively fine spray does mean operators have to watch for drift in changeable conditions and adjust technique accordingly.

“I have to travel quite fast applying 100 litres/ha with the 04 Guardian Air Twin, which is okay in calm conditions and when there’s good foliage to catch the spray,” notes Mr Martin.

“The alternative is to go slower and put on 120 litres/ha – which is another argument for having a big sprayer because it means I can treat a 30ha field from one fill at that volume.”

Switching to an 03 Guardian Air is the other solution for slightly blustery conditions, using the alternating approach again to minimise drift risk; thereafter, the 05 size is a last resort to get the pressure down and produce coarser, more drift-resistant spray.

“And if it’s too windy for that, it’s best to go to the beach – or fly a kite – and leave the job for a better day,” Mr Martin suggests.

“There is certainly scope for fine tuning the set-up with the Guardian Air, even for when you’re working into the wind and then with it,” he adds. “Slowing down is one of the best things as it can have a tremendous impact on drift in terms of effective wind speed and increased droplet size.”

Spraying cereals to top up disease control on the flag and leaf two, or to combat ear diseases, brings out the Guardian Air Twin again, set up to get the spray to settle into the top of the crop.

“For ear sprays in particular, you’re covering all angles thanks to the nozzle’s forward and backward angled sprays,” notes Mr Martin. “So you’ve got the ‘shadowing’ effect of spraying an upright target covered and a nice fine spray to give good coverage.”

Brush up on your spray application skills with our online e-learning Spraying Advice course, including modules on nozzle selection and boom stability.