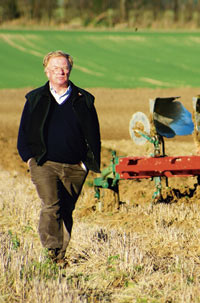 There is no doubt whatsoever that I am going to lose a shed full of money this year. Yields have been below average, the cost of fertilisers rose by around 300% and – just to add insult to injury – the price of wheat is £40/t less than last year. No wonder I am sullen, depressed and miserable. Things, I mused as I sat on the combine, could not possibly get worse.

But I was wrong. As harvest drew to a close the news came through that once again the NFU and British Sugar had been unable to agree on a price for next year’s sugar beet. According to William Martin, the NFU sugar beet chairman, negotiations had broken down completely. Karl Carter of British Sugar denied this. Either way, the poor benighted sugar beet grower was faced with the rather pathetic sight of these two leviathans trying to show how reasonable they had been and how unreasonable was their opposite number. It was, as that great American baseball player, Yogi Berra, once said, “Deja Vu. All over again”.

Twelve months ago we were treated to exactly the same sad spectacle. Out of sheer frustration, some of us organised a meeting on a fen farm outside Whittlesey and were amazed when no fewer than three hundred sugar beet growers, representing around 15% of the sugar beet acreage, turned up. The result of this meeting was that the NFU and British Sugar went back to the negotiating table and eventually came up with a price which gave us an additional £2/t. This meant that another £14m went into the pockets of British beet growers. Not a bad achievement from a bunch of half-baked farmers who had never organised anything more than an egg-and-spoon race at the village school.

When the news came through the other day that once again Karl Carter and William Martin had reached deadlock, it seemed to me that perhaps it would be sensible to try to repeat last year’s meeting. If we could again get three hundred growers in the same room, it might be possible to agree a price below which we simply would not plant a beet seed in the ground next spring. If the growers at the meeting represented at least 10% of the UK beet acreage, then British Sugar would have to take us seriously.

The NFU is now holding a meeting with growers on September 2 at the East of England Showground. The landscape is littered with “ifs”. If Mr Martin can attract a seriously big crowd representing at least 10% of the national beet acreage and if his spellbinding oratory can persuade them not to plant a beet seed in the ground if British Sugar insists on a price cut, then he will be a hero and will deserve the thanks of every sugar beet grower in the country.

If, on the other hand, not many growers turn up – and those that do behave like herded cats – then Karl Carter will chuckle quietly and pour himself a stiff drink.

But even if the meeting is successful, and I very much hope it will be, one thing is certain. We simply cannot endure this ludicrous rigmarole every year. British Sugar have proposed that their price be based on a formula which will be flexible and will take into account the growers’ costs. This is a good idea – but only half a good idea. For there be a true partnership between sugar grower and sugar processor the formula should also take into account British Sugar’s production costs. Then and only then will we the growers and British Sugar, the monopoly processors, be able to have a partnership in the true meaning of the word.

*Do you agree with Oliver Walston? Tell us in the forums