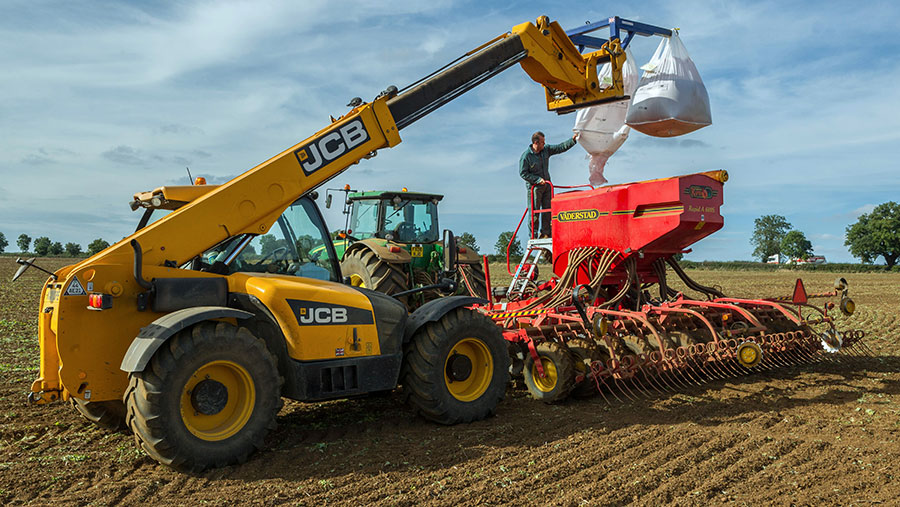 Cereal yields could be down this season as growers struggle to drill during the wet autumn. Many may switch to lower-yielding spring-sown crops.

Growers and agronomists warn that very late-sown winter wheat drilled into wet and cold seed-beds will not thrive, and it may be better to wait until next spring.

An estimated 25-35% of planned winter cereals are in the ground, with the figure higher on lighter soils and in the north of Britain, where early drilling is common ahead of harsh winter weather.

Essex grower Tom Bradshaw has drilled only 10% of his planned 800ha of winter wheat, barley and beans, and with spring seed in the barn, he may be tempted to wait until next year.

“It’s challenging, but the lesson we learned from the wet 2012 autumn was not to muddle crops in poor conditions,” he says.

Mr Bradshaw says he needs a fortnight of dry weather to get on with drilling on his heavy soils, and he will be avoiding drilling in December and January.

“Yields will be lower, as conditions are not ideal, and also as we are drilling later,” says Mr Bradshaw, who is NFU combinable crops board chairman and farms near Colchester.

The switch to spring crops could mean a plethora of spring barley at harvest 2020, which may undermine prices, especially with few malting barley contracts on offer due to Brexit uncertainty.

Lincolnshire independent agronomist Sean Sparling says he has never seen it as wet and with so little drilled at this time of year, with only 15% of the 5,450ha of winter wheat he looks after now in the ground.

However, he adds that there is the opportunity to drill virtually any wheat variety until February, and yield depends more on the weather in May, June and July rather than in October and November.

“There is still plenty of time to get wheat in the ground, but there is no point in drilling into waterlogged soils,” says Mr Sparling, who is also chairman of the Association of Independent Crop Consultants.

He added that there is mild concern about the lateness of drilling, but one of his clients drilled winter wheat last season on 14 February, which yielded almost 10t/ha.

South Lincolnshire grower George Sly is hoping for a period of dry weather to get all his winter cereals drilled on his heavy, silty clay land and avoid the yield reduction that a switch to spring-sown crops would cause.

He made a start on winter wheat drilling last week, with 16ha in the ground, but he had planned to drill 100ha of winter wheat in total and also 60ha of winter triticale on the 280ha Langary Gate Farm, Gedney Hill, midway between Spalding and Wisbech.

The farm is low-lying, virtually at sea level, and will need some good weather for the land to dry out, he says.

“Unless we get a prolonged period of dry weather, with a good breeze, we won’t get back now until the spring,” he adds.

No need to panic

Over in Herefordshire, Bayer’s commercial technical manager, Gareth Bubb, says only about 20-30% of winter cereals are in the ground in his area, but there is no need to panic yet.

“I would advise growers to wait and see, as winter crop yields are generally more than spring crops, so they can wait for up to three to four weeks,” he adds.

He says there will be added benefits from later drilling in terms of lower disease and weed pressures, and also a lower risk of aphid-spread barley yellow dwarf virus.

One factor that may encourage growers to drill, if feasible, is current grain prices, with November 2020 wheat futures hitting £153.50/t earlier this week – the highest level since harvest.

David Eudall, head of market specialists at the AHDB, says this could be an incentive to get crops in the ground during November and December, if at all possible.

“It’s not an ideal situation, but we still have a long way to go and we are likely to see an extended drilling window this season,” he says.