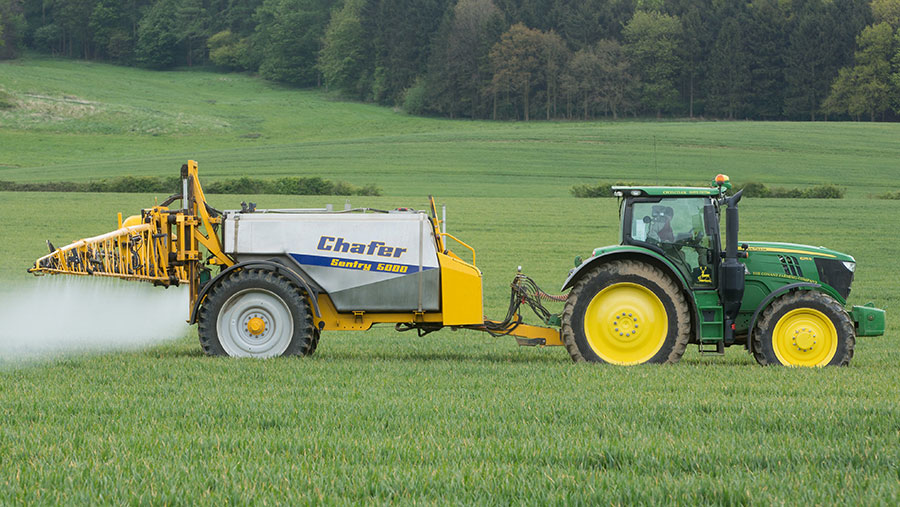 Data suggests the efficacy of straight azole and straight SHDI fungicides against septoria, the top wheat disease, slipped again in 2018, prompting one expert to urge farmers to make more of non-chemical approaches.

In AHDB’s fungicide performance trials, a full label dose of either of the two key azoles, prothioconazole and epoxiconazole, gave an average of 30% protectant control last season, with prothioconazole being the more effective.

Stuart Knight, deputy director of Niab, pointed out that up to about 2009, a full dose of either azole was giving 80-90% protection.

Performance then declined until 2015, when it looked to be stabilising. However, in 2018 it was about 20% lower than the previous three years. It is not clear yet if this is a seasonal blip, or a downward trend, he said.

SDHI fungicide performance also appears to have declined in 2018. “In 2013, when we first started testing straight SHDIs, they gave very high levels of control, and this continued through 2014 to 2016. Then in 2017, we saw the first signs of a reduction in control and they appear to have fallen further in 2018.”

However, Mr Knight cautions against any knee-jerk reactions next spring. “You need to remember this is for straight SDHIs and they are, therefore, being tested in a way that is different to how they should be used on farm.

“When azoles and SDHIs are used together, as in mixture products, we are still getting good control of septoria in the trials and in the field. Both the azole and the SDHI components are contributing to that control. This is reinforced by the use of multisites, notably chlorothalonil, which continues to deliver good septoria protection.”

So what do the declines in sensitivity mean to farmers?

He believes there is “no room for complacency” and the industry needs to think how to protect the existing tools until the next new products arrive.

Corteva Agriscience has already confirmed its new mode of action cereal fungicide has been delayed until the 2020 season.

A key part is to mitigate the risk and that’s why chlorothalonil has a valuable role in helping to protect azoles and SDHIs.

There are also cultural measures that can help, such as delaying drilling and varietal resistance. Earlier this month saw the first variety (Extase) join the Recommended List with a septoria rating of more than 8.