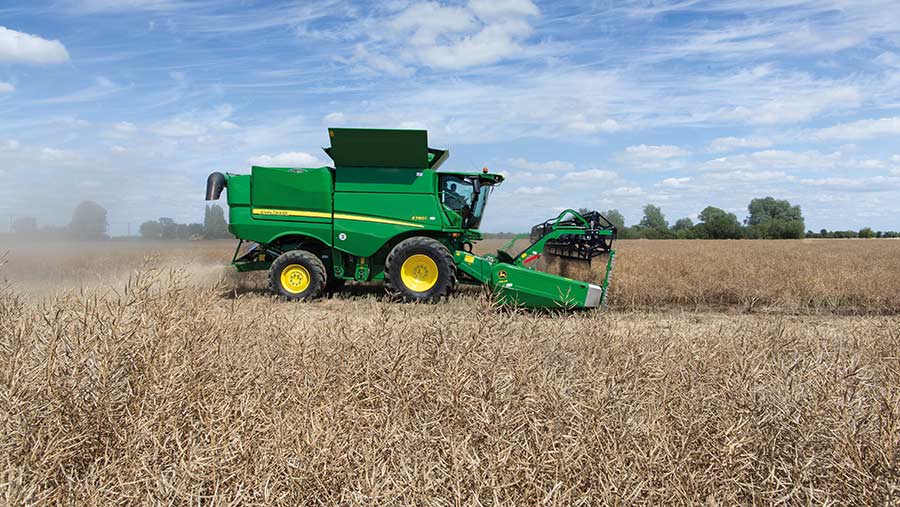 UK oilseed rape growers are already familiar with light leaf spot disease with its characteristic puckered leaves, but they may be underestimating the cost of the disease on stem health.

In fact, it’s called cylindrosporium in Europe, where it is viewed purely as a stem disease, caused by the same pathogen.

And it is a spreading problem that is no longer confined to Scotland, with northern France, Belgium, Denmark and parts of Northern Germany joining the UK as high-risk areas.

Why should UK growers consider cylindrosporium when choosing varieties and managing crops?

To answer this, Liam Wilkinson, Limagrain’s arable crops development officer, points to the three key diseases of the stem:

While phoma can result in yield losses of up to 0.5t/ha, it has become less of a problem in recent years with the use of good resistant varieties, he explains.

Verticillium wilt can result in much higher yield losses of up to 34%, but it is very sporadic – being dependent on the weather – and only affects patches in fields.

This leaves light leaf spot. In normal seasons, you may not see much yield loss, but if it is an early cut-off year, there are yield loses of about 1t/ha and oil content suffers too.

This is because cylindrosporium causes crops to die prematurely, so you don’t get the building of yield and oil content. ”It cuts off nutrient and water supply”

Mr Wilkinson warns that it is a growing problem. “It is endemic and we are seeing new strains. We are also starting to see azole sensitivity in Scotland, so it is becoming more of a challenge to control.”

The impact on stem health is also being underestimated in the UK due to the focus on leaf symptoms.

“In Europe, they are seeing a strong correlation between yield and cylindrosporium stem lesions.”

He believes brown stems seen in years with a quick die-off period are being wrongly blamed on verticillium wilt and phoma instead of cylindrosporium, because it’s harder to diagnose on the stem.

So what can farmers do? 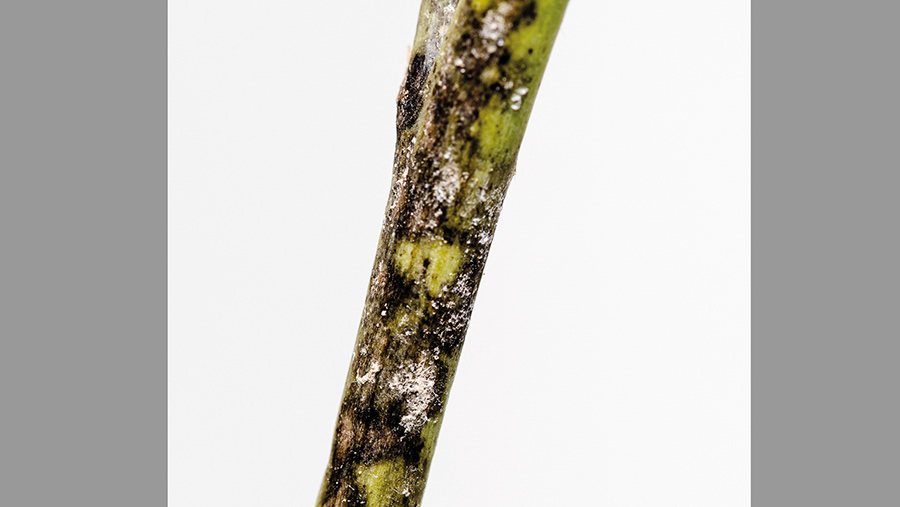 One way to reduce losses is by selecting varieties with better resistance to cylindrosporium. To aid farmers, Limagrain is developing a stem health score, based on observed stem lesions.

Consequently, while some varieties have the same Recommended List score for light leaf spot, their stem health scores can vary. That’s because they don’t look at stems when scoring for the AHDB list.

For example, the five varieties have 6s and 7s for light leaf spot ratings, but range from 2 to 6 for stem health, on a rating of 1 (clean) to 9 (disease).

He advises growers to look at the stems at harvest and consider the stem health scores for the different varieties.

If in a droughty area, growers may need to select varieties with better stem health scores to avoid any yield impact.

Where there is a history of light leaf spot on farm, and there are brassicas in the rotation or verticillium wilt in soil, he advises going for a variety that as a higher stem health score.

“But don’t forget that the stems are a source of inoculum and if drilling the next crop before harvesting the current year’s, there will be a greater risk of disease spread.”

Could a combination of higher prices and increasing confidence in managing the cabbage stem flea beetle problem see the area recover to 500,000ha?

However, Limagrain estimates that the harvest area this summer will be up at about 361,000ha, assuming 5% losses.

Liam Wilkinson believes it may be the start of a recovery which could see it build towards 500,000ha.

“Speaking with farmers who have stuck with the crop or those who have gone back, there is a better understanding of the crop, how to get it established and what works with cabbage stem flea beetle.

“But farmers have already introduced other break crops, so we won’t see 700,000ha again.” In fact, he questions whether such a large area is sustainable.

He highlights some of the lessons learned, looking at the claims made by farmers in the company’s establishment scheme last season, where growers could claim a £100/ha refund if the crop failed.

When he looked at the rainfall figures for England, there was a strong correlation between rainfall at planting + two weeks and plant survival.

“If there are dry conditions and crops are struggling and flea beetle is around, they will decimate crops that can’t grow away, thereby leading to crop losses.”

The key conclusion is not to drill by calendar date and drill to conditions. And choosing a variety with adaptability can greatly aid this, he says.