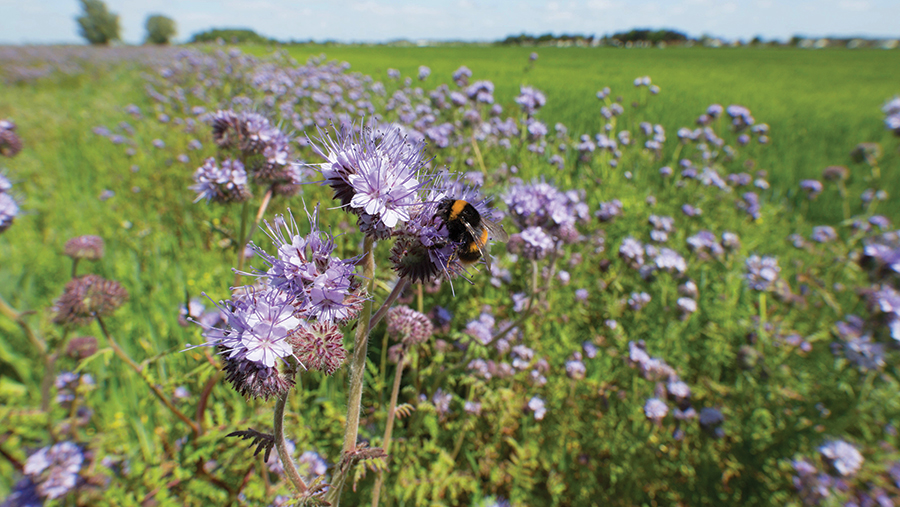 He is taking out of production a river meadow field prone to flooding, creating wide field margins and planting up awkward corners with trees to anticipate the change in farm subsidy support.

See also: Why growers should sign up for greening ahead of new scheme

Contracting a further 1,800ha for nine other businesses

One 12ha field by the River Welland crossed by two footpaths which sometimes floods is set for a mix of wide field margins and environmentally friendly wild flowers.

“It is more profitable to put this field into an environmental scheme than to grow winter wheat or oilseed rape,” he tells Farmers Weekly. 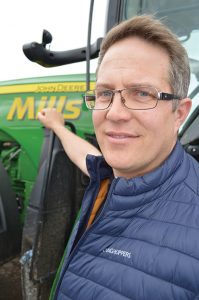 Extra wide 12m grass margins are to be used up against the river as water is pumped from the water course into the nearby Rutland Water reservoir for drinking water.

Mr Houldcroft has signed up the 400ha of arable land he directly manages for a five-year Countryside Stewardship scheme under the Wildlife Offer section, starting at the beginning of this year.

This Wildlife Offer is not competitive, as opposed to the other two options of higher tier and mid tier, and will give him a hopefully easy transition to the new Environmental Land Management (ELM) schemes to be rolled out from 2024.

As area-based subsidies under the Basic Payment Scheme (BPS) will be gradually phased out in favour of ELM, Mr Houldcroft was keen to prepare for a future without direct subsidies.

“We wanted to supplement farm income with the wildlife scheme which will be focused on the less productive land,” he adds.

The farm also contracts a further 1,800ha on which he manages stewardship schemes for nine other businesses across a range of land types.

Jim Egan, technical adviser at Kings – the cover crop and wild flower seed business of agronomy group Frontier – says it make sense to be in environment schemes to prepare for ELM.

He calculates that such Wildlife Offers under Countryside Stewardship should bring in a payment of £3,500-5,000 a year per 100 hectares, contributing a reasonable income for taking less-fertile land out of production.

Under the scheme, the farm needs to put a minimum of 1% of its land into pollen and nectar mixes which pay £511/ha/year over five years and 2% into wild bird seed mix paying £640/ha/year, again over five years.

The first can be established with a seed cost of about £150-200/ha to last five years, while the wild bird mix will need re-seeding within the five-year life of the scheme with an annual mix starting at about £40/ha and a two-year mix at just under £70/ha.

Mr Houldcroft is looking to plant the pollen and nectar mix close to footpaths and openly flowering crops such as oilseed rape and beans, and hopes to see improvement in wildlife in an area which is seeing ospreys over Rutland Water.

Other options in the scheme include buffering around water courses at widths of 12m or 24m, such as close to the River Welland, bringing in £353/ha.

The wildflower mixes and margins are calculated to take 10% of the farm’s land out of production – for a farm which looks to produce an average yield of 9-10t/ha for winter wheat.

“We are looking to protect a part of our income when we know that BPS payments will decline,” he says.

Allerton alert to switchover to ELM

Phil Jarvis is hoping to enter a mid-tier scheme next year to reduce cropping risk on a farm which was one of the first to try out environmental schemes nearly three decades ago. 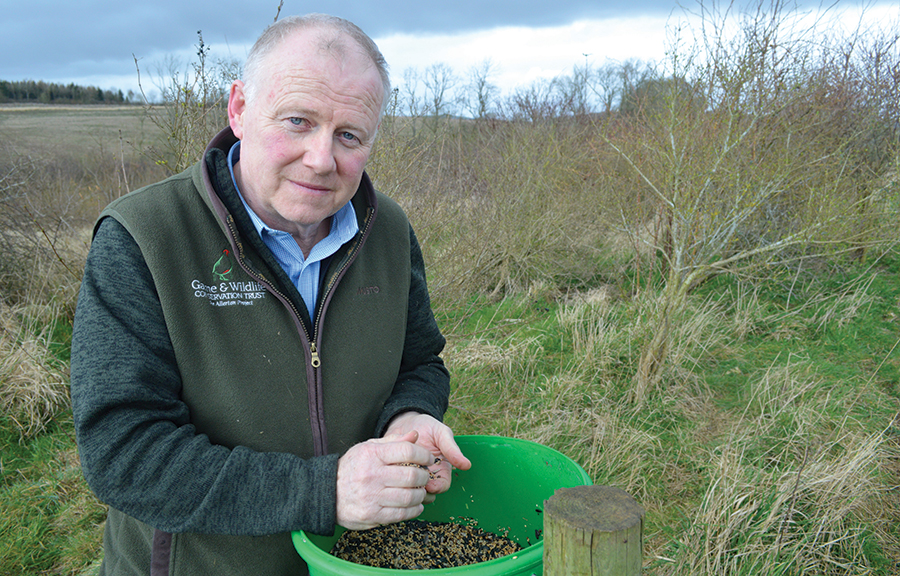 He is head of farming at the heavy land Allerton Project farm in south Leicestershire, and looks to the Countryside Stewardship scheme to regenerate agriculture as direct subsidy payments are tapered away.

“We are going into agri-environmental schemes to prepare for ELM as we watch the government for further detail of these new schemes,” he says.

He manages 320ha at Loddington, some six miles south of Oakham, for a charity set up in 1992 to demonstrate that farming can work well together with wildlife.

High-input cereal production on marginal land will be increasingly risky in the future, he believes, and this type of environment scheme could help the farm move towards lower inputs and lower risk.

He has chosen the mid-tier of the Countryside Stewardship scheme as it opens up more options to Wildlife Offers in addition to the pollen and nectar mixes and wild bird seed mixes. This will start at the beginning of 2021 and replace an existing scheme.

These include using cover crops at £114/ha, paying capital costs for maintaining hedges and ponds and growing low-input cereals at £266/ha, which are all very interesting options for grade 3 marginal arable land at Loddington.

There are the further options of a two-year legume-rich fallow which pays £522/ha/year to build up fertility, but must not be grazed or silaged, while grass herbal leys at £309/ha/year can he grazed and could be useful for blackgrass control.

The Allerton Project farms together with a neighbour, sharing equipment and farming practices, making an 800ha block with neighbour’s sheep grazing grass leys at Loddington.

This option pays £266/ha with the object of producing an open structured cereal crop with a seed rate of 50-100kg/ha to encourage farmland birds, brown hares, rare arable plants, and bees and beneficial insects.

“High input cereals on marginal land are very risky, and this type of option could be right for us,” he says. This option would be even more interesting if linked to growing cover crops at £114/ha.

A further option he will take up is supplementary feeding of song birds paying £632/t/year, where 70% of the grain can come from the farm and 30% from bought-in seed such as sunflowers and millet.

He expects the scheme to take 15% of land out of production and 7-8% in fallow or rotation, and bring in about £40,000/year over five years.

He sees opportunities in what he calls “organic fusion“ that is being paid for fertility building with herbal leys, with or without livestock, and to produce food by climate-friendly farming methods with fewer inputs.

“It’s not about yield, it will be about profit margin without BPS,” he says.

A group of upland farmers are being paid to improve the environment in a trial which could be a blueprint for a future UK farming support policy.

Five grassland beef and sheep farms are being paid up to £5,000 to encourage species-rich river meadow and cut stocking rates in a payment by results scheme run by the National Trust.

The payments for the charity’s tenant farmers in Yorkshire and Lancashire are aimed at improving soil health and encouraging an ideal habitat for pollinators such as bees.

National Trust ecologist Elizabeth Sullivan says the scheme looks to encourage better farming to support nature and has been enthusiastically embraced by its tenant farmers.

“We are exploring different ways that agricultural payments can be made in the future to benefit nature,” she says.

The five farms are largely in the Yorkshire Dales National Park with two in upper Wharfedale, one each in Wensleydale and Swaledale, and the final one just over the Lancashire border in the Forest of Bowland.

A first payment of up to £173/ha over a three-year period is made to farmers to encourage rich meadow land to create a flora abundance and attract a wide range of pollinators.

The farmers are given management freedom with this species-rich meadow which is typically aimed at producing a late hay crop rather than multiple cuts of silage.

A second soil health payment can be made of up to £55/ha, with the highest payment given for pastures with high legumes illustrating both good rooting and low stock grazing.

Farmers could apply for both payments and be paid up to £228/ha. They pick areas of their farms for the scheme and the largest of the five farms has 45ha in the scheme. The areas picked must not be in other environmental schemes to avoid double payment.

The National Trust has 1,500 tenant farmers and 23 in the Yorkshire Dales National Park. The scheme started in 2018 with three farms and picked up another two in 2019.