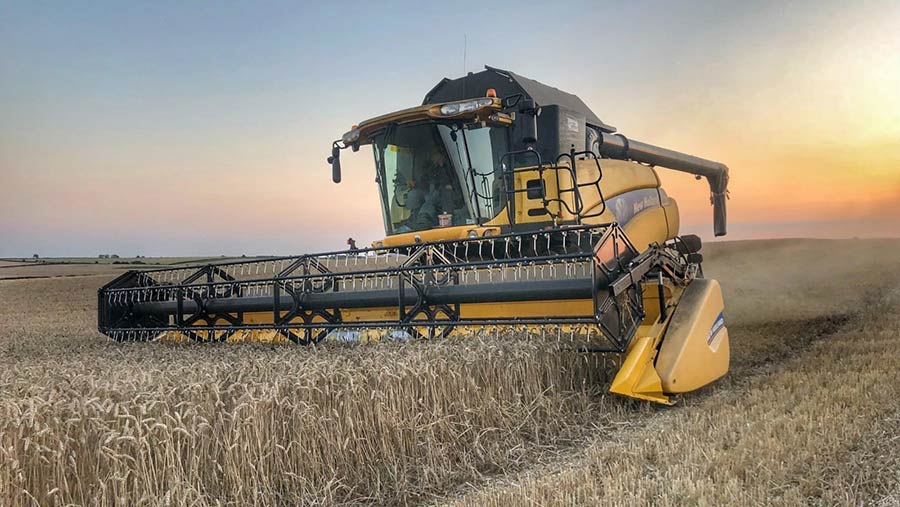 Award-winning winter wheat and oilseed rape yields are being produced by Lincolnshire grower Mark Stubbs from a farm that just six years ago was seeing yields being strangled by a bad blackgrass problem.

This year’s winner of the cereals YEN, with a winter wheat yield of 16.3t/ha, Mr Stubbs has made a number of changes since taking over at A&C Stubbs & Sons and has been rewarded by an almost doubling of yields.

As well as his success with a late-drilled wheat crop, he also took third prize in the oilseeds YEN in 2019, with a field yield of 6.77t/ha produced from a crop which did suffer some early flea beetle damage.

Back in 2013, wheat yields struggled to get to 7.5t/ha and grass weed numbers were rising.

See also: How to keep on top of spring-germinating blackgrass

Today, Mr Stubbs expects to see yields exceed 12.5t/ha and is confident that even in a very wet year, crops that were still to be drilled at the time of Farmers Weekly’s visit in late November will do more than 10t/ha.

Delayed drilling, widespread use of farmyard manure and a move away from ploughing are all behind this improvement, he believes, with blackgrass now at manageable levels and healthy, well-structured soils also making a valuable contribution.

His winning Siskin entry – which was grown as a commercial crop – was drilled on 4 November 2018 at a rate of 450 seeds/sq m, using home-saved seed which was treated with Beret Gold.

Before that, he had subsoiled and used a shallow disc cultivation to get a blackgrass chit, doing it again where necessary and making good use of pressing.

Always careful to keep any cultivations to a maximum depth of 15cm so that blackgrass seed is contained in that soil layer, Mr Stubbs makes his decisions on a field-by-field basis and has seen establishment costs fall considerably. 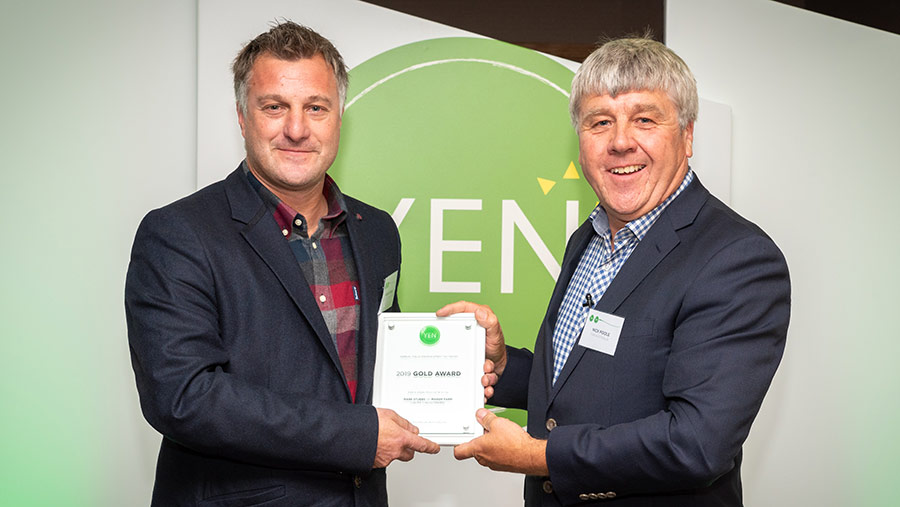 His aim – given the blackgrass legacy – is to produce a thick, competitive crop which has immediate access to nutrients, so that it can grow away strongly.

“In general, we’ve really focused on soil health,” he says. “That’s been done with the help of manures, which are applied to stubbles and then incorporated within six hours. The quicker they’re buried, the better.”

All the manures applied are analysed first, so that he is aware of the levels of major and micro-nutrients that they supply and can make use of the results for subsequent agronomy decisions.

“It’s especially useful for our plant growth regulator programme, as it sometimes has to be frontloaded,” he comments.

“We also find that the nutrition contained in the manures kicks in early on, giving the crop a good start.”

In 2019, granular diammonium phosphate was applied at a rate of 125kg/ha as soon as the application window opened in late January, with the first liquid nitrogen application going on at the end of February.

“We have a policy of feeding the plant as soon as it starts moving,” he says. “After that, we use a ‘little and often’ approach, making three splits in total to apply a total of 230kg/ha and putting them on four weeks apart.” 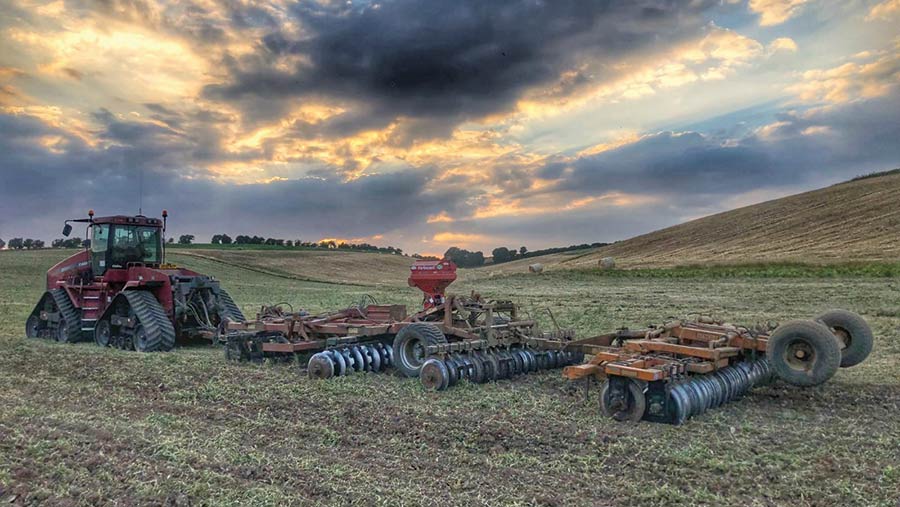 As he is using liquid fertilisers, applications are made on dull, misty days to minimise any impact of scorch.

A three-spray fungicide programme was used, after it was agreed with agronomist Alice Cannon of Farmacy that there was no need for a T0.

“Given the crop’s coastal location at Wragholme, our main targets were septoria and yellow rust,” he says. “We always go for more resistant varieties and we double-check their lodging scores too.”

Two SDHIs were used – with fluxapyroxad featuring at T1 along with epoxiconazole and fenpropimorph, while bixafen was used at T2, mixed with tebuconazole and prothioconazole. At T3, tebuconazole was applied.

An early plant growth regulator application of Moddus was aimed at promoting tillering and was followed up with another at T1.

Harvest took place on August 10 – which Mr Stubbs points out was early for a late-drilled crop. “It was very hot when we did cut it, so I think we caught it just in time.” 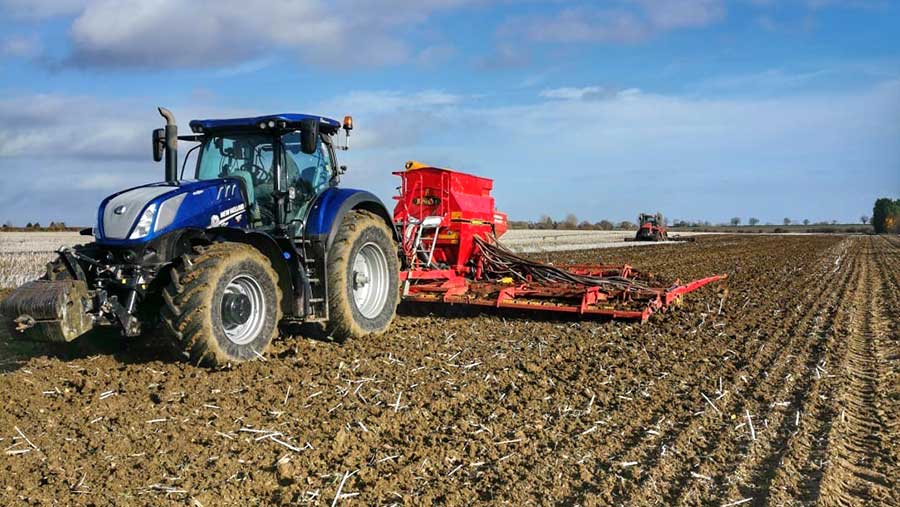 He believes that the winning crop received maximum sunlight hours and enough moisture from the sea frets that occur in the area.

“It didn’t really get the rain that it needed, so the frets kept it going. They also helped to keep the temperature a bit lower than it was inland.”

His YEN report is useful and highlights where attention to detail is needed. “We did tissue testing for the entry and included boron at T2 as a result. We’re using YEN as a means of helping us to improve the farm,” Mr Stubbs says.

The expectation for oilseed rape grown at Calcethorpe and Wragholme is that yields will be above 5t/ha every year.

Having dropped the crop for a few years, when Mark Stubbs reintroduced it and bought hybrids into the frame it averaged 5.5t/ha.

“That convinced me that hybrid varieties were right for our system,” he says. “We’ve grown them ever since.”

Switching to hybrids used to mean he could drill and then forget about the crop while he completed other fieldwork.

“That has changed with the advent of flea beetle,” he admits. “Now we do have to be prepared to take action if they are getting hammered.”

He also finds that they come out of the winter better than conventionals and pick up quickly in the spring, thanks to their vigour.

Mr Stubbs aims to drill in mid-August and has grown Exclaim for the past two years. Diammonium phosphate goes on at drilling, with his one pass establishment system based on a Discordon following the balers as closely as possible. Slug pellets are applied at the same time.

A seed rate of 45 seeds/sq m is used, with the aim of having 30 plants/sq m at harvest. “We did have some early flea beetle damage with shot holing on the cotyledons, but it grew away from that,” he says.

His autumn programme included an October application of Centurion Max, for both blackgrass and volunteer control. Depending on weed and pest pressure, that is sometime preceded by a graminicide and an insecticide.

Broad-leaved weeds were dealt with by a late-November application of Astrokerb, with a phoma fungicide included where thresholds had been reached.

In the spring, Mr Stubbs went on with his first liquid nitrogen application on 13 February, applying 250 litres/ha of 22% nitrogen, 10% sulphur fertiliser.

The second split was done on 8 April after the green bud stage, at the latest time he could travel.

He attributes his YEN success to the crop’s uneven flowering, which he believes let the light into the canopy and resulted in an eight-week flowering period.

He didn’t use growth regulation on his oilseed rape, as he finds that some plants are adversely affected.

The very high yield achieved in 2019 was helped by favourable weather, he summarises. “That isn’t the case with this year’s crop – for the first time ever I’ve had to rip up some of our oilseed rape.”