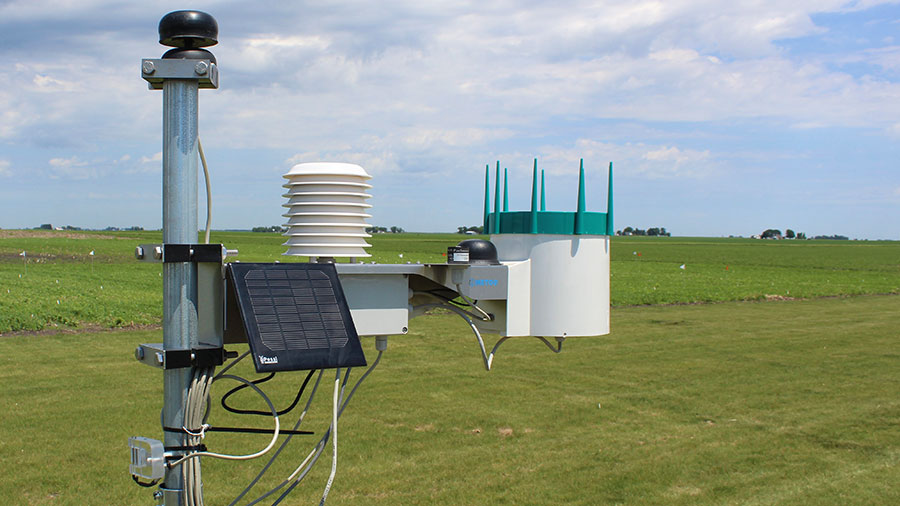 Whether it is a text to alert you to the wind speed being too high to continue safely spraying, or understanding your cumulative rainfall over the past 24 or 48 hours, digital weather stations are starting to make life easier for many farmers who have taken the plunge to get one installed on their farm.

And while saving time on day-to-day management decisions might be the primary use of the data currently, there is a growing belief they could be the key that finally unlocks value in using decision support tools for key decisions, such as disease control programmes.

Available direct from suppliers, such as Sencrop, Metos and Davis, or via distribution companies including Agrovista, Agrii and Hutchinsons, the number of networked digital weather stations has dramatically increased over the past couple of years.

Schemes such as the Countryside Productivity Small Grant offered further incentives for farmers to buy the stations that record, depending on model, data such as rainfall, temperature, windspeed and direction, humidity and leaf wetness.

The data is available through an app in real-time. “Each station on the farm is on a dashboard,” explains Harry Atkinson, Sencrop’s UK business development manager.

You can easily see things such as rainfall for the past hour, or the past 24 hours, temperature, humidity.

It also keeps records from the minute it is switched on so you can customise it and see the rainfall over the past year, or what it was in this week last year, for example.

With Sencrop, there are different subscription levels on top of the hardware costs, with the level of subscription depending on the number of stations on farm, requirement to access longer amounts of historical data, and additional networked stations on other farms. It also includes subscription for seven-day forecasts from Dark Sky.

The ability to see weather information from networked stations is one of the valuable aspects of being part of the Agrii network, says Andrew Ward, who farms near Leadenham in Lincolnshire.

“Most of our weather comes from the South West, so I can look at weather stations further away from me and keep a track on wind and rain to see what we’re going to get and when.”

It also acts as a spraying assistant, both to check wind speed before going and during to make sure he remains complaint with the regulations.

Some systems allow you to set text alerts for a certain amount of rainfall or wind speed, for example. “They’re useful too, although they can be a bit late,” says Mr Ward.

“We farm on two farms just three miles apart: one with light land and one heavier, which are separated by an escarpment. Last year, there was 140mm more rain on the light land one.

“Being able to see if there is a difference in how much rain has fallen on each one helps with setting the plans for the day.

“Previously, you would have had to drive to each to check, so you’re not wasting so much time.”

For Norfolk grower Tom Gay, who farms 260ha alongside his father and brother, near Blickling, the decision support system for disease management provided by Metos as part of its weather station package has helped provide justification for input decisions.

“As a business, we’re looking to improve our soils and trim input costs, while not impacting yields if we can.”

Pessl Instruments, which makes the Metos stations, has been developing disease models using weather measurements since the 1990s, and now has models for a wide range of diseases for both arable and horticultural crops, says David Whatoff, managing director of Metos UK.

For example, for septoria in wheat, the model uses the classic conditions of optimum temperatures of 16-21C, rainfall of more than 0.5mm, and periods of high humidity or leaf wetness for more than 14 hours to judge severe infection risk.

But it also assesses the likelihood of infections outside of those optimum conditions, and the impact of variety susceptibility, he explains, with the result being a model that highlights the risk of light, moderate and severe infections of septoria during the season.

Weather patterns are changing consistently every year and weather stations allow you to target applications much better.

You may be able to save money, but if you don’t, you know you have targeted your chemistry correctly for those varieties.

With the extremely dry April and May, that meant being able to both reduce the number of applications and change what would typically be applied to Mr Gay’s wheat crops, he says.

After missing out T0 because of low risk, the first application was made in early May of chlorothalonil plus a low rate of Proline.

“At T2, we did a very similar rate, again because of low risk.

“But at the point the rain came in early June, we hit high septoria potential, so we got out the big guns and put Verydor + Toledo on at T2.5.

“So as well as cutting one spray out, it allowed us to manipulate and hold disease.

“When we had a spike of conducive weather, we applied the new chemistry at the most timely period we could.”

After two seasons using the Metos system, Mr Purslow believes they give an accurate reflection of what is happening in the field, and believes the benefits will increase as more farms in an area use them.

It can help give the broader picture of disease pressure in an area to help with decision-making. “They can pay for themselves very quickly,” he concludes.