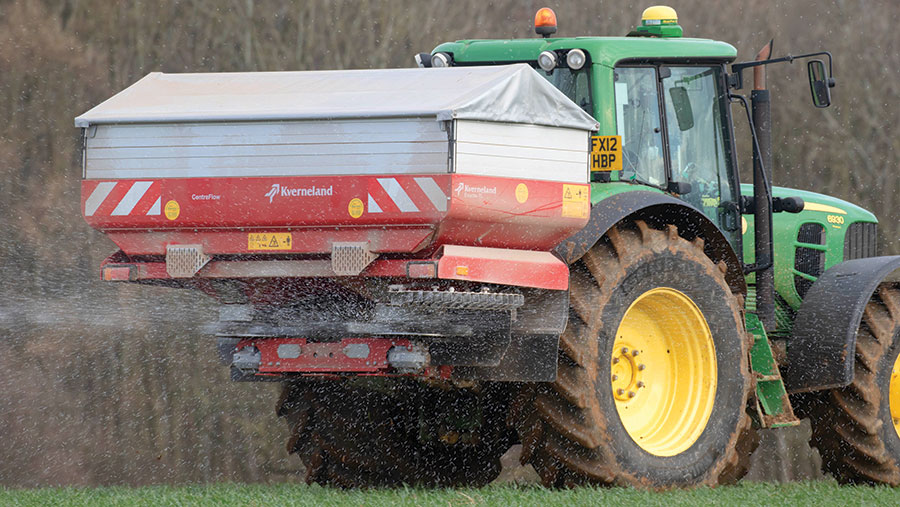 Milling wheat growers may have to apply extra nitrogen this spring to make sure they hit breadmaking standards, especially if top-quality wheat is in short supply and milling premiums rise.

Heavy winter rains led to the leaching of nitrogen in soils and a sharp fall in wheat plantings which could mean good rewards for those who can hit the protein contents needed by breadmakers.

As 90% of the biomass, and therefore yield, comes after late April, there is still plenty of time for growers to assess fertiliser requirements and cash in on premiums despite a lot of poor-looking crops.

Edward Downing, national crop nutrition technical manager at agronomy group Frontier, advises growers not to decide too soon that their yield potential is low, and aim for a 8t/ha rather than a 9 to 10t/ha crop.

“Don’t convince yourself that you have a 8t/ha crop yet, as there is still a huge amount to play for and wheat crops can change substantially with a lot of sunshine in June,” he says.

If the milling wheat premium over feed wheat widens due to an overall lower wheat harvest, then making that 13% protein breadmaking standard becomes even more important.

Mr Downing says the wet winter led both to nitrogen leaching and a lack of mineralised nitrogen in the soil, so growers will likely need to apply an extra 30-60kg/ha to make up for the absence of soil nitrogen.

Many growers may think with a lower yield potential they will not need more nitrogen, but this could be risky with good premiums to aim for at harvest. Yield potential is often easier to assess in mid-May than in April.

Mr Downing says one tonne of milling wheat needs 28.5kg/ha of nitrogen to produce 13% protein, so a 10t/ha crop will need 285kg/ha of nitrogen, either from the soil or from applied fertiliser.

“If you feed for a 8t/ha crop and it turns out to be 9t/ha, then you could well fall down on the protein content,” he says.

Therefore, assessing yields is very important, and there is still plenty of time to take action as 90% of yield comes after GS31, usually in late April, and 60% after flag leaf emergence at GS37, towards the end of May.

He recommends a four-way split of nitrogen for milling wheat, and suggests growers should have stuck to applying 50-60kg/ha in early March and then 80-100kg/ha in early April.

With this standard 150kg/ha on the crop, the third and fourth splits are the times to change rates.

The end of April is a good time to start to assess the need for nitrogen from biomass imagery, tiller counts and tissue testing, to make sure growers hit 13% protein.

As well as protein, breadmakers also look for a minimum hagberg of 250 and a specific weight of 76kg/hl.

He suggests growers try to calculate their yields, monitor their crops and react to what they are seeing, and be prepared to put on more nitrogen, but continually question that decision.

After a third tranche of nitrogen in late April/early May then a critical time comes with the fourth and final applications at the flag leaf stage in late May, often of about 40kg/ha.

This application may depend on weather conditions. If dry then applications may go ahead, but if wet and more rain is forecast then growers may hold back due to fears the nitrogen will be washed away.

The later this dressing is applied then the more influence it will have on grain protein up to ear emergence. After flowering, the uptake of nitrogen declines.

Mr Downing says there are few major differences between solid and liquid soil-acquired nitrogen through the season.

However, late foliar nitrogen applied to the wheat ear can raise protein levels by 0.5-0.6%, which can be very valuable for protein in the 12.5% region.

Mid-June might be the final opportunity to raise wheat proteins, and crops can be tissue tested or checked with a hand-held N-Tester from fertiliser group Yara, which measure chlorophyll in the leaf and is related to the nitrogen status of the plant.

Another factor is variable rate nitrogen applications, as the later dressings of nitrogen can be switched to put more fertiliser on more forward area and less on thinner patches (the opposite to application rates earlier in the season) as this can lift proteins by 0.2-0.25%.

The key factor for this season will be the milling premium with less wheat being grown, and so a move of the premium from £10/t to £25/t has a big influence. “The bigger the premium the more it encourages growers to look to hit the 13% protein target,” says Mr Downing.

Grain traders predict the UK wheat harvest this year could drop to 10.7t/ha from the 2019 harvest of 16.22m tonnes, while millers will still look to buy 5 million tonnes a year.

David Eudall, head of market specialists at AHDB, says premiums could be stronger as domestically grown milling wheat may be short this season, although demand has been disrupted by the effect of the coronavirus and resulting job losses.

The collapse of demand from the food service sector as shops and restaurants closed due to Covid-19 is having an effect on milling wheat demand, although current premiums are holding up at just over £23/t. 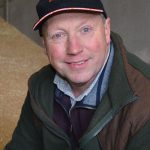 Staffordshire wheat grower David Lane is set to cut the rate of nitrogen applied to some of his milling varieties due to lower yield potentials after a very difficult drilling season.

He had planned to drill 250ha of wheat, but managed only 140ha of milling varieties with some sown at the traditional time in October, while some Skyfall only went in the ground last month.

He is growing 110ha of Skyfall and 30ha of Crusoe, and that which was drilled in October on light land is expected to match average farm long-term yields of 8t/ha, but others drilled later are expected to yield only 6-7t/ha.

The very late-drilled fields of Skyfall are up and away and looking well, but it is difficult to put a yield estimate on this essentially “spring” wheat.

Traditionally, solid nitrogen is applied up to 260kg/ha with milling crops normally following potatoes or oats, but only early drilled good-looking milling wheats will get that amount.

He will make a final judgement on nitrogen rates in three-to-four weeks’ time but says the potentially lower-yielding crops will need less nitrogen and none of his wheat will get more than 260kg/ha.

All the sulphur and 90kg/ha of nitrogen is on his crops at the family-run 790ha Home Farm, four miles south-east of Lichfield, which grows its milling wheats on light and medium soils for one of Britain biggest bakers, Warburtons.

Warburtons’ quality specifications are a little lower than the industry benchmark, at 12.5% protein, 225 hagberg and 76kg/hl specific weight, but it bans the use of any foliar liquid nitrogen applied to the wheat ear, and for that offers a guaranteed £20/t milling premium.

James Attwood reports his wheats are looking quite strong and he is unlikely to push nitrogen rates up on his heavy soils on the Isle of Sheppey in northern Kent.

In one of the driest areas of England, the farm managed to drill all its planned 1,000ha of Skyfall and Crusoe on its fertile silty clays on the edge of the Thames Estuary.

Nitrogen rates are likely to be a normal 180-190kg/ha, which plus mineralised nitrogen calculated for the soil would push that up to 230kg/ha available for the crop.

All the milling wheats have solid ammonium nitrogen applied in a three-way split with the last doses going on at the flag leaf stage to give an extra protein boost.

“Looking at the crops at the moment they look good and we have no immediate plans to push nitrogen levels above our normal,” he says.