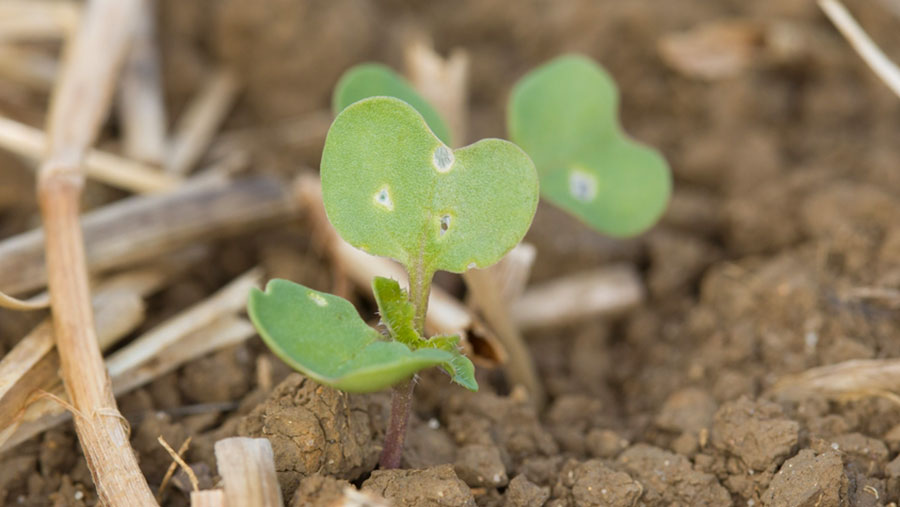 The NFU has submitted an emergency application for growers to use banned neonicotinoid seed treatments on oilseed rape this autumn.

Seed treated with the pesticide would be needed to establish oilseed rape without crops being harmed by cabbage stem flea beetle, it said.

Environmental campaigners have urged the government to reject the application.

The Expert Committee on Pesticides will consider the NFU’s submission before making a recommendation to government ministers, which will make the final decision.

The committee’s next meeting is Wednesday, 4 May.

NFU vice-president Guy Smith said the union had assessed the evidence and listened to the experiences of its members who grew oilseed rape last autumn.

Mr Smith said: “The NFU has applied for emergency use of neonicotinoid seed treatments on a limited proportion of the oilseed rape crop in England.

“This will be specifically targeted to the fields at greatest risk from cabbage stem flea beetle.”

Three neonicotinoid pesticides were restricted throughout the EU in 2013 after scientists warned that they posed a risk to pollinators, including honeybees.

Last year, the NFU secured emergency permission for growers to use neonicotinoid-treated seed across 30,000ha of oilseed rape deemed most at risk from cabbage stem flea beetle.

But the union said damage caused by the pest still contributed to an estimated 10-14% reduction in the area of oilseed rape planted in England for 2015–16.

Farmers used all the principles of Integrated Pest Management (IPM) when trying to protect their crops and plant protection products were just part of the solution, said Mr Smith.

“These insecticide seed treatments are effective in reducing the damage caused by the pest CSFB and prevent the destruction of an important crop, both environmentally and economically.”

Mr Smith said the NFU had surveyed its members to improve understanding of which geographical areas were currently most at risk from the pest.

Meanwhile, the NFU welcomed the development of IPM techniques for growers’ use in trying to manage the huge numbers of cabbage stem flea beetle encountered in the UK.

“As the resilience of food production becomes more important than ever it is vital that regulation of plant protection products is based on sound science and evidence.

“The decreasing availability of these products to farmers is hampering UK farmers’ ability to produce the wholesome and affordable British food that shoppers in this country expect.”

Friends of the Earth

But the Friends of the Earth environmental campaign group said allowing growers to use the pesticides would be “reckless and unnecessary”.

Recent scientific evidence had added to the concerns about the impact of the three neonicotinoid pesticides on bees and other pollinators, said FoE bee campaigner Dave Timms.

Neonicotinoid seed treatments allowed last year may not have been effective against flea beetle and crop losses due to the pest were lower compared to the previous autumn.

“Oilseed rape yields have actually risen since the pesticide ban was introduced, while the evidence of the harm these chemicals pose to bees has increased.

“Bees are essential for pollinating our crops – we can’t afford to gamble with their future. The government must keep these dangerous pesticides out of our fields.”