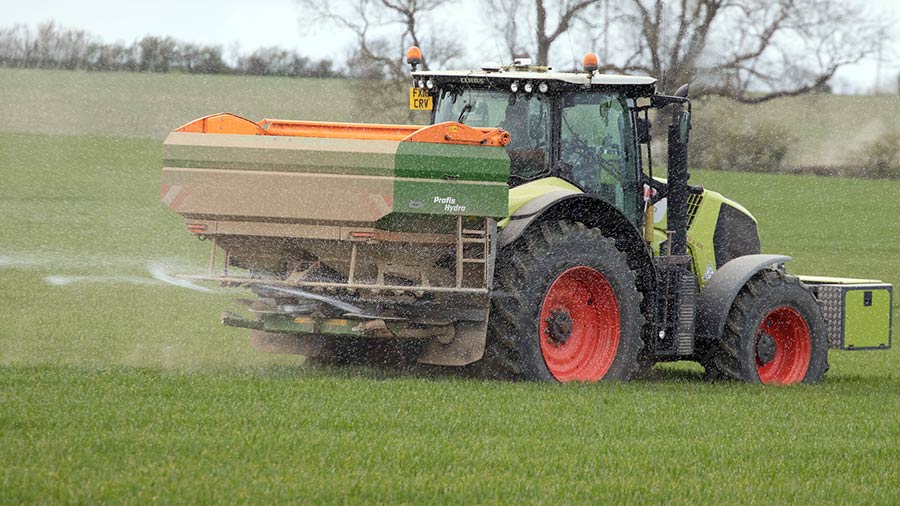 Farmers can potentially cut nitrogen fertiliser rates by 50kg/ha for feed wheat this spring, according to a review of independent trials data.

Big increases in fertiliser prices have forced growers and agronomists to look at ways to cut costs by optimising nitrogen inputs, but getting it wrong can end up costing farmers even more in lost yields.

To help farmers optimise nitrogen inputs this year in response to inflated N fertiliser prices, the Association of Independent Crop Consultants (AICC) carried out a review of historic trials data and its more recent work.

Andrew Watson, AICC member and head of Membership Technical Services at Niab, looked at 131 Niab nitrogen response trials over the past 25 years.

This was to identify any trends and offer a guide for winter wheat growers on what optimum rates might be for 2022, given the high price some farm businesses have paid for fertiliser this year.

Much is made of the effect of previous crop and soil mineral nitrogen (SMN) on optimum rates in the following crop, but the analysis showed this is limited.

Looking at 66 winter wheat trials on mineral soil types, following various crops and where SMN data down to 90cm was available, results ranged from 24.6kg N/ha after herbage seed to 78.7kg N/ha after peas.

While this range may look wide on paper, not all SMN will be used – about 30-40% depending on conditions – and Mr Watson says its overall contribution to total N is relatively low.

This is backed up by plotting the SMN figures against optimum N and yield data, with no clear relationship between the two. Instead, any previous crop effects are likely due to other agronomic factors.

As growers will be looking to cut back on N inputs this year, it indicates they shouldn’t do so based on SMN results.

“In my opinion, it has a very limited benefit in planning for new-crop N rates,” said Mr Watson at the recent AICC virtual Annual Technical Conference.

Scrutinising the same data, he looked at economic optimum at two prices – a more typical 70p/kg and the eye-watering £2/kg many have paid following steep price rises since last autumn.

“I’m not suggesting cutting back quite that far, but a 50kg/ha reduction is sensible if you have paid the higher price for your fertiliser, and you only stand to lose about 3% in yield.”

What about milling wheat?

CCC Agronomy’s Peter Cowlrick has been involved in the Association of Independent Crop Consultants’ (AICC) extensive nutrient trials for several years and said potential to cut back if aiming for milling premiums is less clear cut.

He said the higher nitrogen requirement is always going to incur an extra cost, it’s whether the premium outweighs that extra cost. That will ultimately be decided by a combination of yield potential, the market and N purchasing price.

The four-year mean from the AICCs work suggests a baseline of 240-290kg N/ha in ammonium nitrate form applied across four splits will optimise milling wheat yield and protein levels and straying too far from this may compromise quality.

Efficiency savings can be made by switching to alternative sources, some of which have been shown to improve margin.

AICC trials independently assess the agronomic and economic value of the latest products for advisers and their clients each year, and in 2021 a polymer urea foliar fertiliser was trialled.

Several similar products based on urea polymers are available, which are claimed to break down slowly after application, giving a phased release over a period of about six to eight weeks.

This improves nitrogen use efficiency and reduces leaching and volatilisation, all important factors as agriculture looks to minimise environmental impact and reach net-zero goals.

Mr Cowlrick said the results indicate they might have a place in wheat nutrient plans, with one 20-litre/ha application at growth stage 39 or 65 able to replace the final 40kg/ha of traditional fertiliser.

“We were still hitting protein and in essence, if you bought your N mid-season at a high price, our work indicates there was an uplift in margin when using the polymer-based product.”