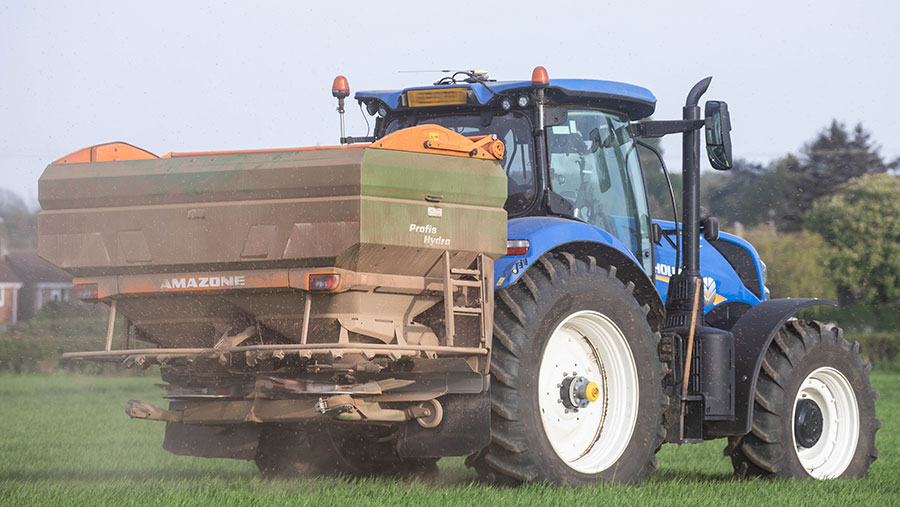 Carbon-free fertilisers that will help cut the carbon footprint of arable production could be on farms from 2024, believes Anke Kwast, vice-president of Yara’s Climate Neutrality Roadmap.

But they could be between two and five times more expensive than regular fertilisers.

Yara has already halved the greenhouse gas emissions from fertiliser production by implementing nitrous oxide catalyst abatement, which reduces the gas’s emission from nitric acid plants by more than 90%.

The first step for farmers to reduce their footprint is to use nitrogen fertilisers as efficiently as possible, to ask for abated fertiliser and to consider the region where it has been produced, as these differ, she suggests.

Green fertilisers are produced from hydrogen sourced from water. The hydrogen unlocked from water by electrolysis using renewable energy is then converted, together with atmospheric nitrogen, into ammonia via the traditional Haber-Bosch process.

“Currently, the majority of the hydrogen comes from natural gas, and the carbon dioxide from that gas can be reintroduced to produce urea. A side-effect, therefore, will be that there is no carbon dioxide by-product, and it doesn’t make sense to reintroduce it from another source just for it to be released in the field later,” Ms Kwast points out.

“Nitrate is the only fertiliser source that can become carbon-free.”

Three pilot projects investigating the potential of producing green hydrogen for fertiliser production are already under way, but collaboration is required to move towards a decarbonised food chain, she stresses.

“The commitment is there, and the process started, but the reality is that moving to carbon-free fertilisers will increase fertiliser cost by two to five times. Somebody has to pay for it.”

In order to scale and speed up, more support is required from policymakers to secure a fair return for farmers by incentivising climate-neutral food production, and also to help drive investment to bring the production cost down, she suggests.

“The food chain industry also has to contribute by creating more value from climate-neutral food production and share it with all parties who are contributing to it.”

Anke Kwast was speaking at a crop nutrition seminar at the recent CropTec event.