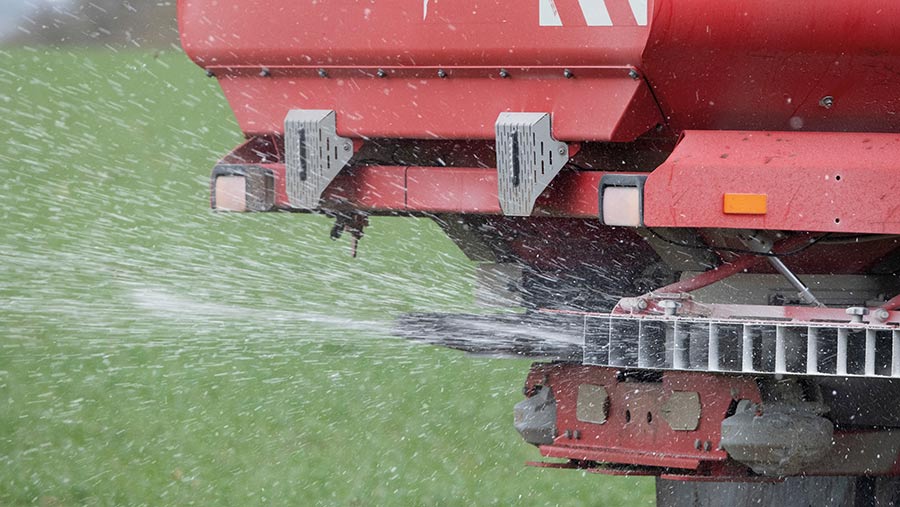 Crop nutritionists point out that as the climate changes, accurate fertiliser application becomes even more important for squeezing out the most efficient use of whatever nutrition is applied to crops.

We talk to a feed wheat grower about how accurate soil analysis led to pushing his grain yields and profit margins higher, and a malting barley producer who managed to cut back on nitrogen and still get an improved result.

Yields of his feed wheat touched 12.65t/ha and his profit margins over fertiliser costs rose by more than £100/ha in a field scale trial, and the new approach is set to be implemented across the whole farm next spring. 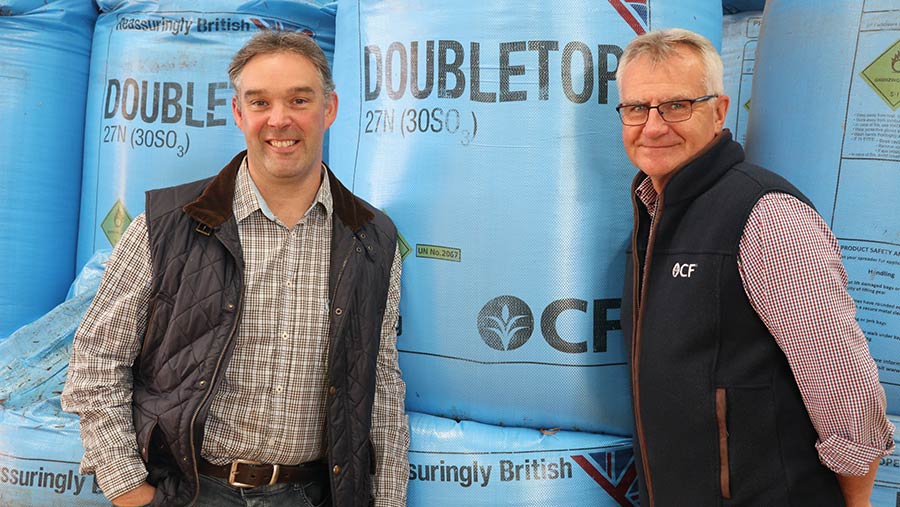 He focuses on accurate soil analysis in the late winter and then calculates his crops’ needs to push the utilisation of nitrogen up to 90% and reduce fertiliser run-off into watercourses.

“Financially and environmentally it make sense to put just the right amount of nitrogen on the crop,” he tells Farmers Weekly.

Mr Pugh is already looking to do his bit to help water quality in the Severn Trent catchment area by establishing buffer strips around his field to limit water run-off in the winter.

He is a third generation farmer operating across 300ha of medium clay loam at New House Farm, about four miles west of Bridgnorth in south Shropshire, and decided to run the fertiliser trial across a 28ha field in 2019.

The farm is using CF Fertilisers’ N-Min programme to measure available nitrogen in the soil, and then use the group’s N-Calc to work out the nitrogen needs based on the yield potential of the crop.

The N-Min test showed a soil nitrogen level of 68kg/ha, and there was a further 30kg/ha shown to be already in the crop after a tiller number count, giving a Soil Nitrogen Supply (SNS) of 98kg/ha.

The N-Calc then worked out that a further 172kg/ha of nitrogen would be required to give a 10t/ha wheat crop, taking into account the field’s soil type and previous cropping.

It was decided to raise the nitrogen rate to 191kg/ha for the feed wheat variety Gravity to reach its genetic potential, and to try three different fertiliser approaches, all using a three-way split of fertiliser.

All three areas received an initial fertiliser application providing 39kg/ha of nitrogen and 53kg/ha of sulphur in March.

The trial took place for the 2019 harvest, and further work was unable to be conducted in 2020 as only 10ha of winter wheat was drilled in the very wet autumn of 2019.

But this autumn, Mr Pugh drilled just over 150ha of winter wheat and barley in four days in mid-September to make sure he got his crop in the ground.

His aim is to use ammonium nitrate in spring 2021 because of the extra yield and utilisation, and for practical reasons: he has to use and store only two types of fertiliser – a nitrogen-sulphur mix and ammonium nitrate.

“Ammonium nitrate gives us better efficiency and yield so we will be aiming to use it on the crops in 2021,” he says

Ross Leadbeater, business manager at CF Fertilisers, says the N-Min test helps the efficient use of nitrogen fertiliser and limits environmental concerns. “Ammonium nitrate gave the best returns for the farm even though it was more expensive,” he tells Farmers Weekly.

He adds that the urea-only treatment gave a nitrogen fertiliser utilisation efficiency of 50% and the ammonium nitrate some 90%. Official fertiliser recommendations in RB209 assume an average nitrogen recovery of 60%.

Balancing nitrogen needs with the weather

Nitrogen availability from the soil is very dependent on the weather, so as the climate becomes more variable, so too will the amount of nitrogen that can contribute to crop growth.

Therefore, in order to increase the efficiency of nitrogen use on-farm, an understanding of the increasing variability of climate is essential, says independent researcher Mechteld Blake-Kalff of Hill Court Farm Research.

“Cold conditions can slow down the mineralisation of soil nitrogen that becomes available to the plant, wet conditions can result in it moving down the soil profile where it might become inaccessible, and dry weather impedes uptake by the roots,” says Dr Blake-Kalff.

All these factors are affected by location, soil type and the legacy of nitrogen left by previous crops, so there is no way growers can assess their nitrogen requirements accurately unless they know where they stand with regard to all of these factors.

“Accurate soil nitrogen testing and application planning as a means of risk mitigation is becoming an essential part of any serious arable farm now,” she adds. 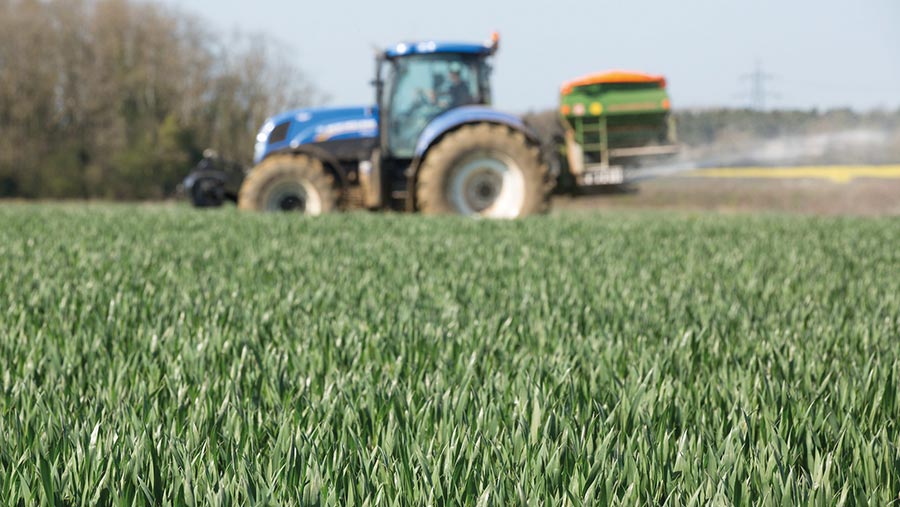 Wasting nitrogen
The environmental implications of getting these calculations wrong are significant, with excess applied nitrogen potentially leaching into waterways, as well as wasted nitrogen not being used for plant growth.

“One thing we are learning is that good environmental practice usually makes financial sense too. Balancing inputs and outputs is key and the only way you can do this is to know the starting points of what you’re going to get from soil nitrogen before you apply anything,” she adds.

Dr Blake-Kalff says many of the most efficient producers are now making greater use of organic sources of fertiliser – if not practicing mixed farming – such as sewage sludges, farmyard manures or waste water.

“But again, the key is to know what they have contributed to your overall nitrogen status before you open a single bag of fertiliser,” she says.

Worst harvest
According to ecologist John Redhead, at the UK Centre for Ecology and Hydrology (UKCEH) research institute, 2020 was the country’s worst harvest for at least 25 years as a result of the poor weather but, unfortunately, he say this cannot be seen as a one-off.

“Climate researchers generally agree that the way climate change will manifest itself in the UK is in wetter winters and hotter summers with less rainfall,” he adds.

The UK is unlikely to see a smooth transition to a warmer climate in the years ahead with an increasing likelihood that it will be typified by periods of extreme weather with the result that there will be more years like 2020.

Using inputs such as inorganic nitrogen in a more targeted way that gets the most out of them will be a key part of any sustainable production system in the future. It is also likely to benefit the environment and help to reduce the causal effects of climate change in the first place.

In recent UKCEH research, it was found that yields were most stable in landscapes with both arable land and semi‐natural habitats evenly distributed throughout the landscape.

George Fisher, head of marketing at the UK’s largest fertiliser maker, CF Fertiliser, says greater investment is going into helping growers plan their nitrogen more efficiently, and in many cases this can  lead to less nitrogen fertiliser being used on farm.

Lancashire grower John Shacklady has increased his spring malting barley yields by 10% while cutting his nitrogen fertiliser use by some 15%.

In a farm trial, he fine-tuned his fertiliser timings to improve yield and still make malting grade, so he will expand this new regime to 30% his crop for next spring. 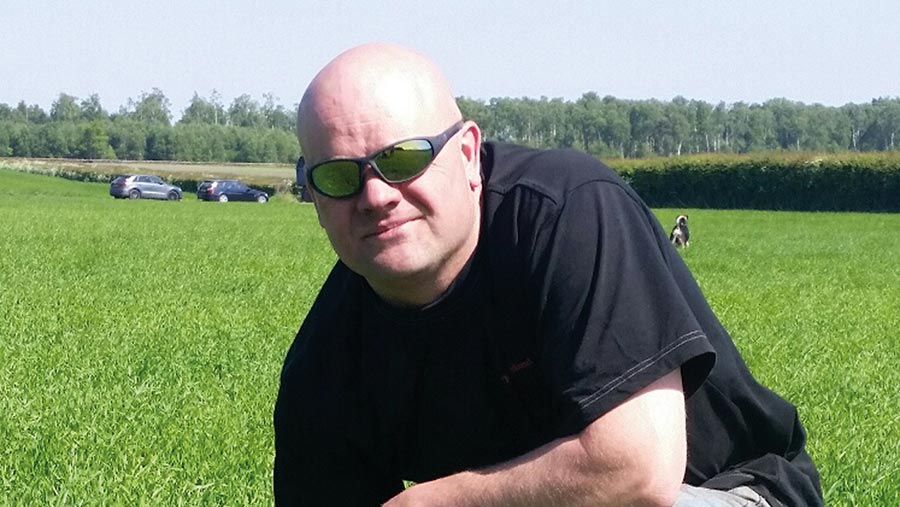 “The trial’s success shows we can increase yields and reduce costs with no penalties,” he tells Farmers Weekly.

The approach of applying a reduced amount of nitrogen fertiliser but putting it on earlier will be followed across an increased area of spring barley next year after the farm trial’s success in 2019.

The farm trial cut total nitrogen use from 106kg/ha to just 90kg/ha, and lifted yields from 5.93t/ha to 6.55t/ha while adding nearly £105/ha to the margin over fertiliser costs.

Spring malting barley is an important crop of Mr Shacklady’s Brook House Farm, on the western edge of St Helens in Lancashire, making up 100ha of the 420ha farmed.

The crop usually gives a grain nitrogen of 1.6-1.8% and is suitable to produce malt for major brewer Molson Coors at a yield of about 6t/ha, but the trial demonstrated he could push up yields, cut back on fertiliser and still make malting grade while reducing brackling, or ears falling to the ground.

The spring barley crop is often drilled early in February after late-lifted fodder beet, so seedbed fertiliser is not used. The farm’s practice is to apply a blended nitrogen-phosphate-potash-sulphur (N-P-K-S) fertiliser at the first leaf stage to give 63kg/ha of nitrogen, followed up by ammonium nitrate at the three-leaf stage to add 43kg/ha, giving a total of 106kg/ha of nitrogen.

The trial field was N-Min tested to give a SNS of 64kg/ha, and so a further 90kg/ha of nitrogen was recommended by N-Calc to achieve a yield of 7t/ha.

The farm’s traditional practice was compared with one application of a granular N-P-K-S compound fertiliser to provide 45kg/ha of nitrogen in the seedbed, followed by another 45kg/ha of nitrogen from ammonium nitrate at the first-leaf stage, adding up to 90kg/ha.

This latter approach using the compound fertiliser and less nitrogen delivered a gain in yield while maintaining the critical 1.5% grain nitrogen content for malting.

Ross Leadbeater at CF Fertilisers adds that using 2020 prices, the 5.93t/ha yield from the blended approach produced a margin over fertiliser costs of £620/ha while the 6.55t/ha yield from the compound and less nitrogen treatment delivered £724.90/ha – or nearly £105/ha more.

In addition, he points out that in terms of nitrogen recovery and utilisation, growers are much better off applying P and K in the spring so these vital nutrients are immediately accessible to the crop.

This is working in partnership with the farming industry to develop innovative farming systems that produce food more efficiently and sustainably, whilst increasing resilience to extreme events.

Assist programme lead Richard Pywell says the group is working with the farming industry to look at simple ways to improve soil health and resilience to drought, and new ways of increasing the effectiveness of natural pest control to reduce reliance on pesticides.