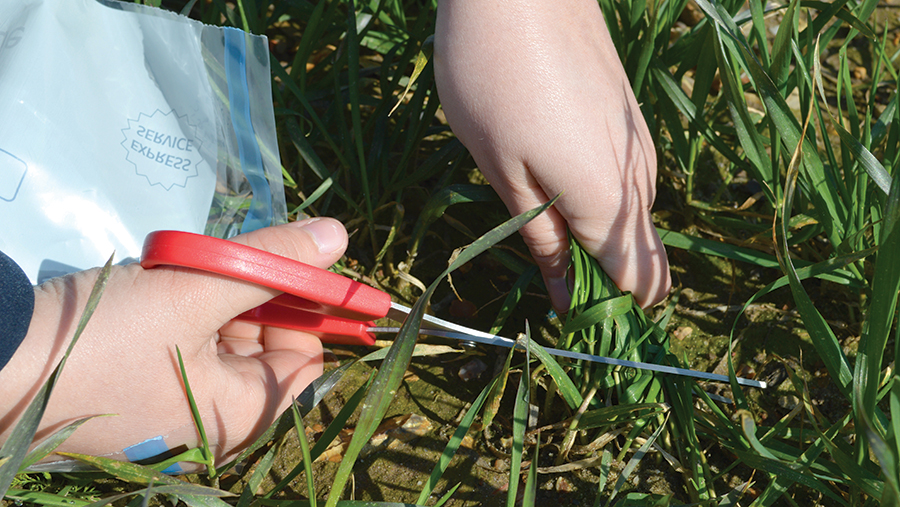 Tissue testing has helped Berkshire wheat grower Dan Willis push his yields up to 20% higher while his resulting healthier crops has seen him cut his fungicide costs.

Checking his wheat crops for nutrient levels through the spring by tissue testing saw his light land farm see its best harvest so far in 2019, with average milling wheat yields nearly touching 10t/ha.

He believes that the key is to get the right balance of nutrients to his crops on his light “hungry” soils where micro nutrient deficiencies can quickly appear.

“We are seeing yields up 15-20% since we started tissue testing, so it’s a worthwhile cost, and we are now taking a more targeted approach,” he tells Farmers Weekly.

The cost of testing and applying micro nutrients is about £30-35/ha for the farm, and this was amply rewarded with a large yield increase for his milling wheats.

His first plant samples for this season were taken in early March with the winter’s heavy rains likely to have leached out major nutrients, such as nitrogen and sulphur, and probably micro nutrients like magnesium and boron. 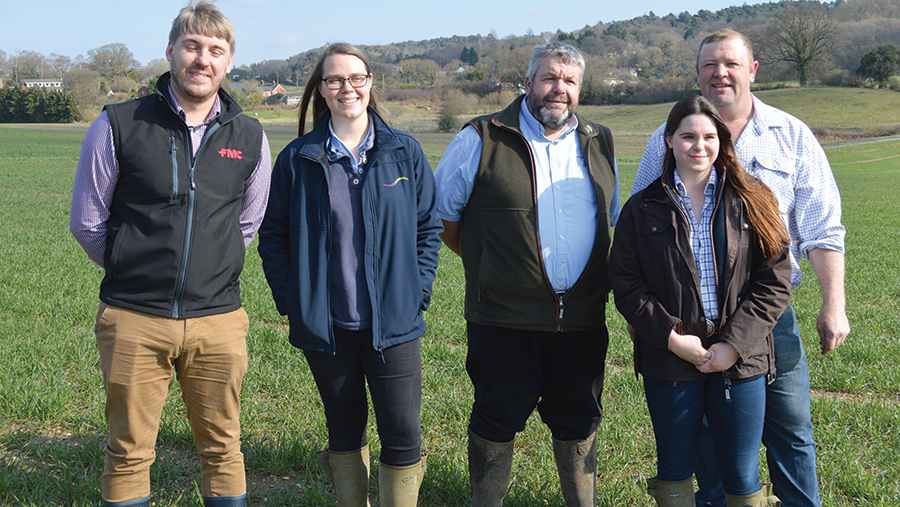 He points out that his light sandy soils are unforgiving as they quickly show micro nutrient deficiencies, and so he tries to be two weeks ahead of other farms on heavier soils.

In partnership with his mother Hazel, he farms some 750ha of sandy soils over chalk at Rookery Farms, Curridge about three miles north of Newbury on the lower Berkshire Downs growing wheat, barley, oilseed rape, maize and grass.

He has moved over the past two decades from ploughing to minimal tillage to strip tillage and is aiming eventually at direct drilling to improve his soils, along with using garden compost and three-year grass leys.

A lot of his farmed land is along the sand and gravel corridor following the M4 motorway and is prone to drought, and in the past he has often struggled to get milling wheat yields of 7t/ha.

Therefore, he moved to “intensive” tissue testing three years ago to be more precise with his crop inputs, along with a “little and often” approach with applying nitrogen fertiliser.

He knows from past experience that his light soils are generally deficient in manganese, but last year he was also applying magnesium and boron to achieve his top yields.

“Last season we pretty much stayed on top of any deficiencies and did not see any problems in the crops,” he says.

The result was his 200ha-plus of Zyatt winter wheat last season yielded an average of 9.8t/ha, and all made milling grade of 13% protein, 250 Hagberg and 76kg/hl specific weight for his best-yet overall milling wheat yields. 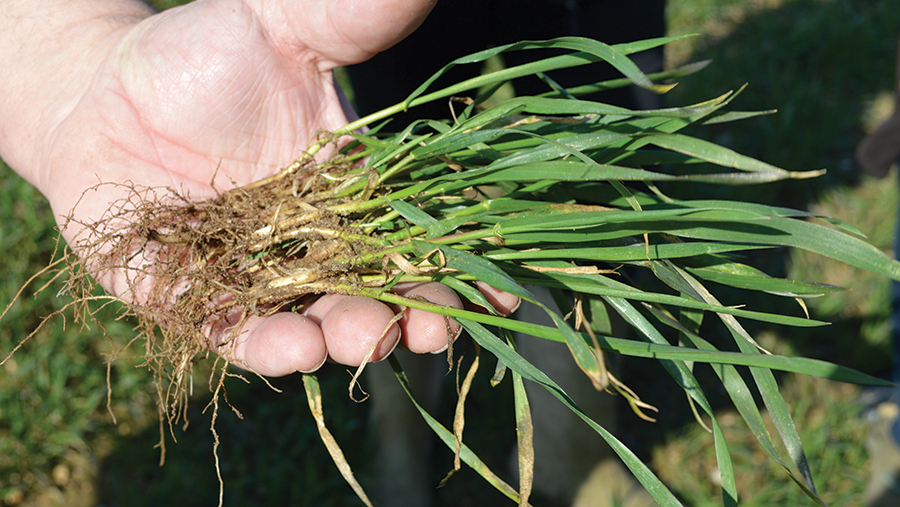 Wheat rooting has been good despite the wet weather

The secret was a programme of tissue testing and subsequent treatments devised with Andrew Stilwell, crop nutrition and soils technical manager at merchants Bartholomews Agri Food. He also conducts a comprehensive soil analysis across the farm.

Wheat plant samples are cut well above ground level to avoid soil contamination, and the testing process is starting late this year due to the late season.

Mr Stilwell expects nitrogen and sulphur to be low this season, but he will be looking at levels of calcium, which is key for root growth, and also zinc, along with manganese, magnesium and boron.

The key period for testing is the three months of March to May, and ideally any micro nutrients needed can be added into spring fungicide sprays.

Chris Bond, commercial technical manager for crop nutrition at FMC, the company which supplies some the micronutrients on the farm, says he is seeing some wheat crops this season short of magnesium.

Last season for the first time polysulphate fertiliser was applied in the autumn to his Zyatt wheat at the two-leaf stage, giving the crop 48kg/ha of sulphur along with magnesium, calcium and potassium all in the crop-available sulphate form.

There was natural mineralisation of nitrogen ahead of drilling, and sulphur was added to work in synergy with the available nitrogen to give the crop a good start in the autumn.

Spring nitrogen, in the form of solid stabilised urea, was applied in a five-way split between mid-February and flag leaf stage in the middle of May. The total dose was 240kg/ha.

Further sulphur of 70kg/ha was applied in the spring, as the farm is moving to separate nitrogen and sulphur applications as the sulphur tends to have a slower release over 50 days.

“We were looking to create a little and often approach and also splitting the nitrogen and sulphur, so a steady foodsource was available season long,” says Mr Stilwell.

A tissue test in the dry spring of 2019 led to adding magnesium and manganese in the T0 spray, and two further tissue tests led to boron and zinc being added at T1 and then magnesium again at T2.

Each plant sample costs about £35 each to test, and if two samples were taken across, for example, a 10ha field and this process carried out three times in the season, the cost could be just over £20/ha. With £10-12/ha spent on products, this means the whole programme could cost about £30-35/ha.

One added advantage is that healthier wheat plants fed with good crop nutrition are less susceptible to disease.

“Improved crop nutrition has led to improved overall health and we have been able to rein in on fungicide spend,” says Mr Stilwell.

This has helped trim fungicide costs last year by at least £20/ha with big savings made at the T2 stage bringing the overall seasonal cost down to about £80-85/ha.

The policy was to stay on top of disease early, even through it was a dry spring, and avoid “firefighting” later. To this end, a standard azole and multisite mix was used at T0.

A “strong” T1 was applied of an SDHI/azole/strobilurin/multisite mix, which allowed a reduced spend at T2, when an SDHI was omitted with just an azole/strobilurin mix being used. This T2 was largely aimed at rust.

For the ear spray a relatively inexpensive treatment of a full rate of the azole tebuconazole was used to keep the ear clear at T3.

“We need to target inputs more precisely and we have found that plants under stress let in mildew and rusts,” says Mr Willis.