A specific strain of nitrogen-fixing bacteria, isolated from sugar cane in Brazil and capable of colonising plant roots, is being developed into a technology that could reduce the farming industry’s reliance on bagged fertiliser and increase crop yields.

Fertiliser is a key input cost and the holy grail for farmers is having cereals and oilseeds that can fix their own nitrogen from the atmosphere, as legumes can. This has remained a distant possibility until now.

Work carried out by Ted Cocking at the University of Nottingham with Gluconacetobacter diazotrophicus (Gd), a non-rhizobial bacterium, has shown that biological nitrogen fixation in a range of crop species is a reality and can be done without nodulation.

His discovery that this strain of bacterium colonises the roots and shoots of plants systemically, where it aligns with chloroplasts to increase photosynthetic efficiency and form diazochloroplasts, prompted commercial interest from Azotic Technologies Ltd.

As a result, the Lancashire-based company has developed seed inoculum technology called N-Fix, which is already being used for in-furrow applications on soya beans and maize in the United States with good effect.

Azotic has also signed an exclusive distribution rights agreement with Gleadell in the UK and Ireland, with the two companies working together to trial the latest formulations (see panel). 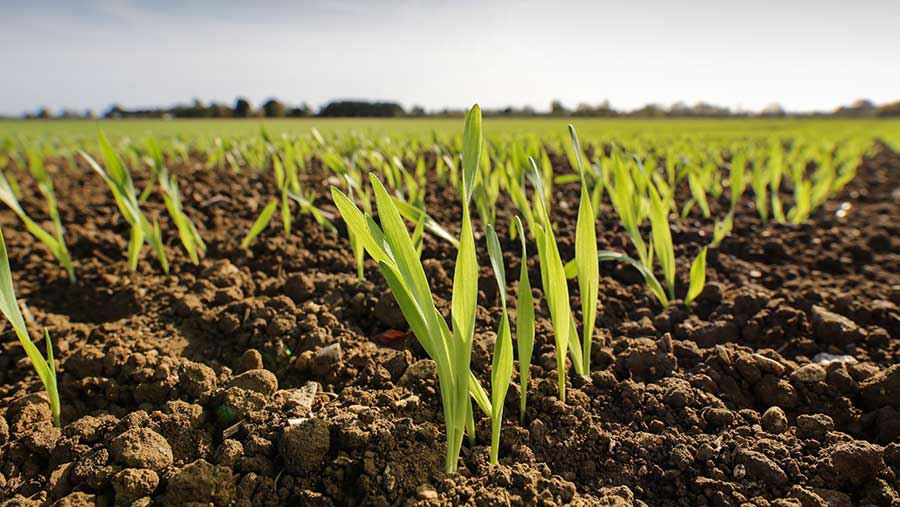 Having spent his career working on nitrogen fixation, Prof Cocking points out that the initial research work failed, as too much effort was put into studying rhizobial bacteria in legumes, rather than looking to nature for the solution.

“For the first 20 years, we didn’t make enough use of natural diversity,” he says. “We needed to find bacteria that could form cell interactions, so that they could become part of the living cell and remain healthy. Nitrogen fixation has a high energy requirement.”

The clues for the next step were the knowledge that the garden plant Gunnera can fix nitrogen by biological means, along with the observation that sugar cane has a low requirement for nitrogen fertiliser but doesn’t deplete soil nitrogen reserves.

“The isolation of Gd, the most extraordinary diazotroph, from sugar cane, was the breakthrough,” he says. “It’s a unique strain – the others don’t become intracellular.”

Gd is known to produce cellulase-type enzymes, which break down cell walls and allow the bacteria to penetrate plant cells, where they form vesicles.

Once there, they become closely associated with chloroplasts, which supply the energy required for nitrogen fixation.

What makes the perfect nitrogen-fixing bacterium?

The bacteria are systemic in the plant, entering via the roots and then moving up the plant.

There is no evidence that they weaken the plant or have any detrimental effects on growth.

Three years of trials in various crops have shown that fertiliser inputs can be reduced where Gd is present and that there are often yield increases.

The technology can be used in cereals, oilseeds and grasses, as well as crops such as rice and maize.

As far as bringing it to market is concerned, N-Fix is already being sold in the United States under the brand name Envita.

The current formulation is used for in-furrow treatment, but work is continuing to develop both a seed coating and a foliar spray.

Production of the bacteria, which is done in the UK, has been scaled up recently, with specialist facilities in Redcar producing what Prof Cocking describes as a “concentrated soup culture”.

This seed inoculum technology adheres to the seed as a coating, ensuring the bacteria are present as it germinates. They then colonise the growing plant and form a symbiotic relationship.

“It’s a sustainable solution,” he stresses. “If used in the right way, it will allow growers to wean themselves off the use of synthetic nitrogen fertilisers. That has to be a good thing.”

Bringing it to the UK market

Getting a formulation that can be used as a seed coating on wheat and will go through the seed plant without disruption is the priority for Gleadell, so that UK farmers can make use of the nitrogen-fixing technology.

The first N-Fix product tested didn’t result in the expected colonisation of the seed, but development has come on in “leaps and bounds”, the company reports, and a new formulation will be evaluated this spring.

If those tests results are positive, it is hoped that there will be a limited supply of treated seed released for a pilot test in autumn 2019. In the UK, it will go under the brand name NPN4.

There are also plans to test a foliar product in 2020, reveals Stuart Shand of Gleadell, who points out that the technology has the potential to reduce bagged fertiliser N use by 50% with the same yield, and increase yields by as much as 1t/ha when using a normal fertiliser programme.

“It’s natural and has achieved organic certification,” he says. “There’s a great deal of interest, not just from farmers, but from food and water companies too. The environmental advantages of the product appeal widely.”

He adds that it is a live product, with a limited shelf-life. “The bacteria don’t live on in the soil, so growers will need to keep using it. And although it’s systemic and the wheat seed will contain N-fixing organelles, at this stage that won’t be enough to be useful.”

Professor Ted Cocking was talking to Farmers Weekly at a recent AHDB Agronomy event in Suffolk.

He is director of the Centre for Crop Nitrogen Fixation at the University of Nottingham and a Fellow of the Royal Society, the World Innovation Foundation and the Institute of Biology.

He received a Lifetime Achievement Award for International Research on Plant Nitrogen Fixation from the University of Toledo, Ohio, in 2004.