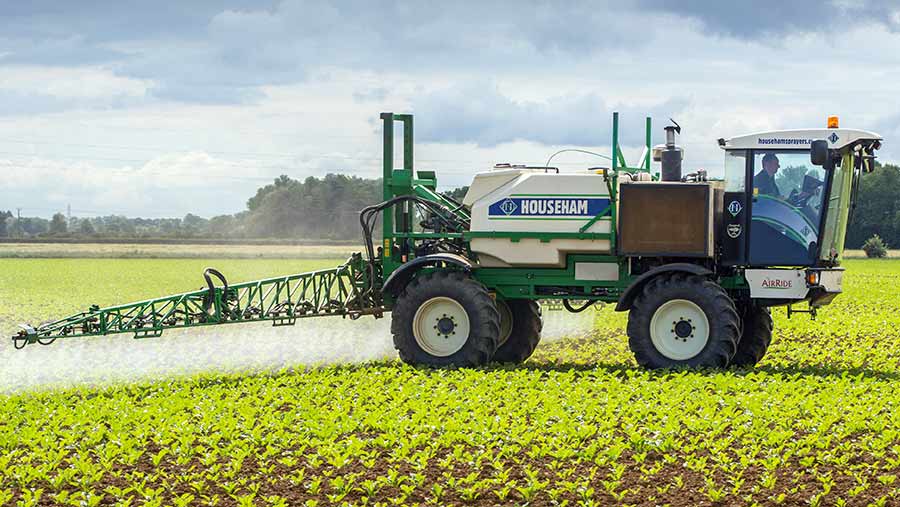 A desire to increase sugar beet yields while saving on inputs has seen Allpress Farms introduce rhizobia bacteria in the hope of making more efficient use of its peaty soils.

The bacteria have the ability to make existing nutrients, such as phosphorus, more available to crops, thereby making better use of the relatively high proportion of organic matter of between 13% and 16% of the farm’s Cambridgeshire Fen soils.

In addition, the bacteria can fix atmospheric nitrogen, further reducing the need for additional inputs.

See also: How to get more from your on-farm crop trials

A limited trial last year saw sugar beet roots increase in weight by a third without reducing sugar content, convincing farm manager Jim Thompson to spray his whole crop this season in an attempt to increase on last year’s yield of 89t/ha.

Mr Thompson was inspired to investigate the potential benefits of introducing new bacteria to the farm after completing a soil scholarship for Sainsbury’s.

Alongside cropping 70ha of sugar beet, 200ha of wheat, and 200ha of maize for anaerobic digestate use, the farm is a major producer of leeks for the supermarket, cropping 400ha each year.

Through crop consultant Niab Mr Thompson agreed to host a sugar beet trial with Smart Rotations, a biofertiliser company that has been developing specific blends of plant growth-producing rhizobia bacteria for arable crops.

Each plant type has a beneficial relationship with just a few bacteria species, and identifying these for each crop has taken the group several years. It has conducted 52 trials on cereal crops so far, with specific mixtures in development for wheat, oilseed rape, oats and barley.

The bacteria blend for members of the beet family, such as sugar beet, spinach and beetroot, contains four species. While they all exist naturally in soil, the bacteria is being bred from places such as the James Hutton Institute.

The sugar beet was drilled over a three-day period starting on 27 March last year, with Mr Thompson making his first application of the bacteria in May.

The bacteria can be applied with a standard sprayer using a low pressure range, but does need an additional pass as the company has not conducted any tank mixes.

The crop had already emerged by May but enough soil was still showing for good results, as ideally the mixture should be sprayed directly onto the soil to avoid the bacteria becoming desiccated.

Although the bacteria can travel through the leaves to the soil, it is more at risk of becoming desiccated by UV light exposure, and should be applied early in the morning or late evening. To protect against desiccation the bacteria is delivered in a “buffer” solution with a bio-stimulant “lunchbox” to feed the biological cells.

Smart Rotations says it opted against freeze-drying, instead choosing to deliver the bacteria in a solution, which delivers 100 million bacteria per plant, around 1,015 cells in each 5ha application, which factors for some losses in the field.

Despite these measures, the dry season last year meant that there were concerns the survival of the bacteria may have been compromised, and a second application was made in June.

While the worries were unfounded, in very dry weather water rates could be increased. 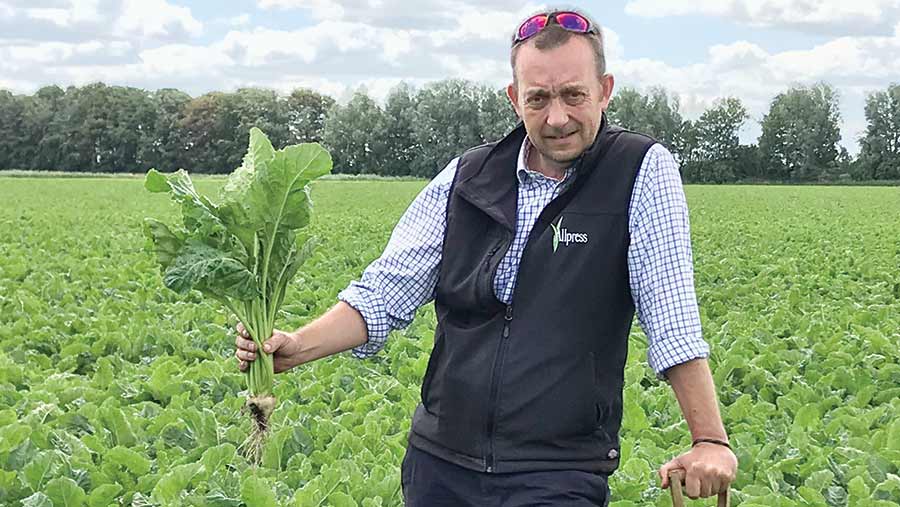 The two applications of the bacteria mixture, at a combined cost of £38/ha, resulted in a 33% increase in the weight of the 100 sugar beet roots tested from the 1ha trial.

Additional tests on a subsample of eight roots, which is not statistically robust but does give an indication of the effect on sugar levels, showed a slight increase of 3.2%.

Rather than cut the current inputs the sugar beet gets of 40k/ha of nitrogen and varying levels of potash, Mr Thompson plans to use the bacteria as well.

“For us it will be an additional input as the extra yield and sugar, at the current price of £22/t, more than covers the cost of the bacteria,” he says.

Two applications are generally recommended, dropping to one for less high value crops.

While Mr Thompson’s lifting times are dictated by the British Sugar transport scheme, for those growers with more manoeuvrability, the bacteria offers the opportunity to lift early, says agronomist Christina Lankford, who also advised on the trial.

Rather than wait for yields to reach their absolute maximum, growers could instead lift a week or two early to allow for better establishment of a following winter wheat crop.

Growers who do not yield as high for sugar beet could therefore put the additional cost against the wheat crop, rather than the beet.

“The bacteria would also be a good option for growers who don’t have access to farmyard manures but want to be thinking about their rotations long-term,” she says.

For growers like Mr Thompson, who does a lot of land-swaps with neighbours to avoid the build-up of onion and leek diseases, and also rents land, adding manure or compost is not an appealing option as he will not be using the land long-term.

However, with results seen the same season, the bacteria would allow a more short-term investment in the soil.

“On land which you only have for one year, so there isn’t time to do cover crops, the bacteria can be put on and you will get results,” says Ms Lankford.