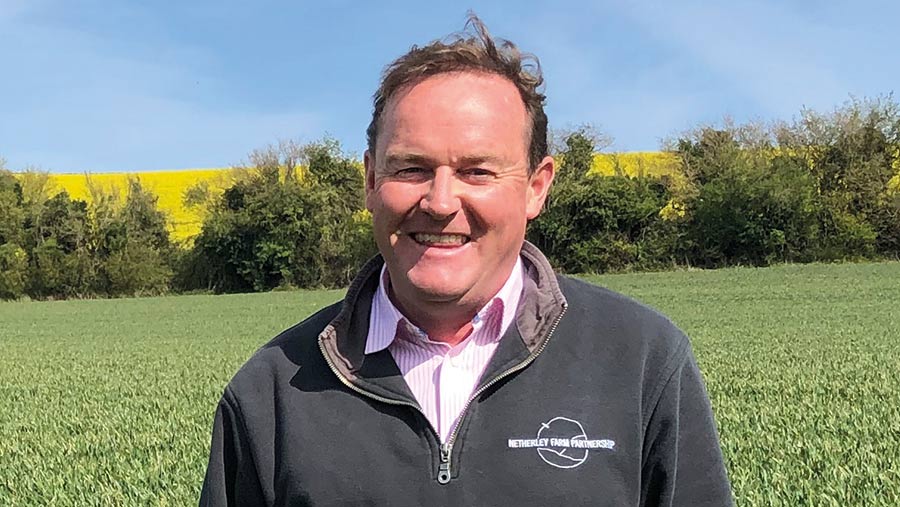 When Hampshire grower Simon Budden entered a prestigious milling wheat competition, as a first-timer he didn’t expect to scoop the top prize. Yet his crop of Crusoe won gold with a yield of 11.98t/ha and a grain protein content of 13% in the Yield Enhancement Network (YEN) milling wheat challenge.

With timely input applications and a firm focus on crop nutrition, his entry showed excellent grain and dough quality.

He now hopes to use the knowledge he gained from the experience to develop thicker, greener canopies with greater ear numbers, while also delving deeper into the formation and size of wheat grains.

Crusoe is the milling wheat variety of choice at Manor Farm, Hampshire, where the cultivar has been grown for seven years, frequently reaching the magic 13% protein mark to hit milling spec.

Despite the variety yielding slightly less than Zyatt, which is also grown on farm, Crusoe requires 40kg/ha less nitrogen to hit the milling spec. “Crusoe has a greater nitrogen use efficiency than Zyatt and reaches the milling premium more easily,” says Mr Budden.

The winning crop was drilled on 20 September into good soil conditions, and it received 302kg/ha nitrogen in the spring and early summer. Although soils are predominantly loams, with some clay cap and flint over chalk, the type and content of soils vary significantly, making variable-rate applications a priority to even up crop quality across the field.

“Every farm has some variability in its soils,” explains Mr Budden, who uses soil type as the main driver to determine a flexible input approach for seed, nitrogen and plant growth regulators across the 460ha farm.

Stale seed-beds were established using a Carrier cultivator, and the YEN crop was then planted with a Horsch Sprinter direct drill, fitted with 5in Dutch openers at an average seed rate of 185kg/ha.

“Using a variable rate helps us to achieve consistency and target inputs more effectively. Nitrogen application rates can vary as much as 40-60% across a field. We want to reach the specific protein percentage and don’t want to deviate from the milling spec and upset the end user,” he says.

Five solid ammonium nitrate splits are applied to wheat crops, supplying nitrogen in a “little- and-often” approach to keep plants tillering and growing for as long as possible.

“Come January, the crops were looking a bit thin given the wet winter conditions, so the first of five ammonium nitrate applications began early in the season,” he says.

This was followed by applications of triple superphosphate and muriate of potash, while the second nitrogen application at the end of February included some sulphur.

The use of a handheld Yara N tester also plays an important role in crop nutrition, by tweaking nitrogen inputs to meet crop needs in a bid to optimise yield.

Mr Budden samples all wheat fields at the flag-leaf stage, picking 30 of the newest fully developed leaves to test their chlorophyll level, with the N tester indicating the amount of nitrogen present in the crop.

The YEN crop was identified to have a greater requirement for nitrogen than originally expected, so an additional 40kg/ha of late foliar nitrogen was applied at the watery ripe stage on 8 June, bringing the

Mr Budden entered a standard crop of milling wheat into the quality competition, run by crop consultant Adas, as he hoped to benchmark data to identify any potential improvements that could be made.

Grain nutrient analysis was part of a range of crop assessments provided to entrants at the end of the season in a detailed report.

This highlighted particularly low levels of copper in the post-harvest sample, measuring 0.9mg/kg. Mr Budden was previously aware of copper deficiencies, but this identified the extent of the issue, as anything below 2mg/kg indicates limited copper uptake.

Analysis also flagged up a very minor deficiency in potassium, with grain measuring 0.34% (0.04% below the optimal threshold).

Not only were a range of nutrient values calculated, but the length and width of grain was also measured. Grains were identified to be shorter and more dense than the optimum, with a length-width ratio of 1:8 and a density of 1.1.

As grain filling is predominantly determined by the rate of photosynthesis after flowering, the health and longevity of the canopy remains key in maximising yield. Smaller grains, therefore, indicate possible limitations during early grain fill, which restrict yield.

As a result of these findings, Mr Budden is eager to delve deeper into crop agronomy.

He plans to further promote tillering and ear counts to achieve the optimum 600 ears/sq m by homing in on the early use of plant growth regulators and nitrogen applications to maintain a greener canopy for longer.

He is also entering spring oats, oilseed rape and winter wheat into the relevant YEN yield categories this season to expand his knowledge across a range of seed and oilseed crops produced on farm.

Looking ahead: A flexible production strategy 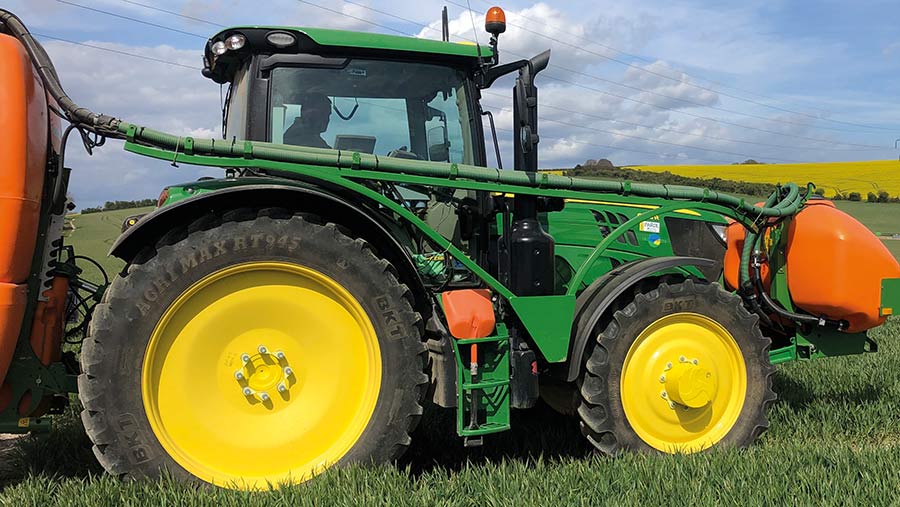 This season marks the first time the Crusoe variety has not been grown on farm, and is the driest March and April Simon Budden has yet witnessed.

Limited rainfall totalling 46mm over the two-month period, combined with night frosts where temperatures reached -2C, knocked crops back, with some blemishing on leaf tips.

After large influxes of imported German wheat and crashes in demand due to Covid-19 made it a challenge to sell milling wheat last year, Mr Budden has developed a more flexible strategy.

Both seed and milling crops are being grown, and will be marketed for seed or milling depending on how they fare throughout the season. “Unfortunately, no Crusoe seed contracts were available, so we have opted for Zyatt and Extase. Extase has a particularly good disease profile and is a Group 2 wheat,” he says.

As premiums are scraping about £20/t, when they should be more like £30-£40/t, Mr Budden hopes this strategy will offer a greater degree of flexibility when it comes to marketing his crops with two completely different potential end uses.

“Seed crops don’t need the extra nitrogen that the 13% milling wheat market requires. This means I can test N levels and select the fields that will suit each market, reducing the total nitrogen use across our wheat area.”

When it comes to disease, the farm’s coastal location 30 minutes from Portsmouth, combined with average rainfall of 1,000mm, mean septoria is a significant threat, and brown rust is also problematic.

Furthermore, sea mists driving in from the coast and the Isle of Wight create a unique microclimate that can quickly dampen crops and create an optimum environment for disease to thrive, as well as causing difficulties with harvesting crops in the evening.

An effective four-spray fungicide regime costing less than £98/ha helps to keep disease at bay, but with production costs on the rise, Mr Budden and his Agrii agronomist, Chris Rylatt, aim to drive this down further, to below £92/ha.

The pair plan to use new azole chemistry and a strobilurin for disease control and late-season green leaf retention.