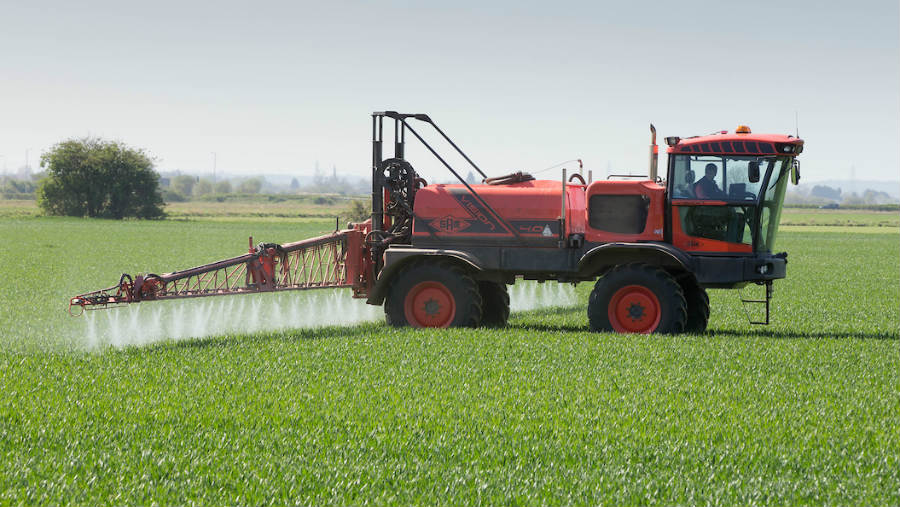 A lack of any essential mineral elements in plants will slow growth and development, and reduce crop yields.

So where yields are coming in below expectations, it’s usually worth taking a closer look at the crop to determine whether further nutrition is required.

Often a warning comes with the onset of characteristic visual symptoms that reflect the role of a particular nutrient.

Another point to note is that the location of deficiency symptoms usually reflects the plant’s ability to redistribute the mineral element from older to younger tissue.

Plants require at least 14 mineral elements to complete their lifecycle. Of these, there are six macronutrients that are required in large amounts:

And eight micronutrients that are needed in much smaller quantities:

In addition, although not considered to be essential, cobalt and sodium are required by some plants and it’s also been shown that boosting silicon and selenium levels can be beneficial in certain circumstances.

Both soil and leaf analysis are used to diagnose micronutrient deficiencies.

However, because soil concentrations of elements aren’t always available to the plant and mineral elements can become “locked up” and difficult for the plant to extract, foliar analysis (otherwise known as tissue testing) is often the more important of the two.

Where leaf testing is being used, it’s important to choose your leaf carefully.

Not all leaves contain the same concentrations of any given nutrient and leaf age can determine the reading that you get. As a rule of thumb, it’s usually best to take the youngest, fully expanded leaf.

Manganese deficiency is the most common micronutrient deficiency seen in UK crops. Sugar beet, cereals and peas are all considered to be susceptible, especially where they are grown on high pH soils.

The first sign of a manganese problem in cereals is pale green, limp foliage. In sugar beet, plants develop interveinal mottling on the leaves and the leaf margins tend to curl inwards.

Peas have internal discolouration, which shows up when they are split in half, otherwise known as marsh spot.

With iron, zinc, copper and manganese, levels in soil may not be available to the plants. Although iron deficiency is rare in field crops, it often affects fruit crops growing on calcareous soils.

Zinc deficiency is seen in 10-15% of field crops, often showing on sandy soils with both a high pH and phosphate status. Copper deficiency is rare, but may occur regionally on light, shallow soils in cereals and sugar beet.

Nickel levels are usually sufficient for UK crops and molybdenum deficiency is associated only with acid soils, where it can cause a condition known as “whiptail” in cauliflowers.

Chlorine, zinc and molybdenum are readily translocated within the plant, which is why deficiency symptoms are first seen in older leaves.

But for iron, copper, manganese and boron, retranslocation from older to younger leaves is a slower process, with deficiency symptoms initially being observed in younger leaves.

Make sure that your soil pH has been checked and corrected, if necessary, before you embark on micronutrient applications. In recent data from Lancrop Laboratories, 20% of soil was below the optimum pH.

Remember that it can be difficult to address a micronutrient deficiency during the growing season, as it’s often too late by the time visual symptoms have been seen.

A better approach is to know which fields are prone to deficiency and try to pre-empt the problem.

Boron can be applied as either soluble borate salts, to the soil or foliage. Where borate salts are applied to the soil, they are either broadcast or banded, according to the crop and soil conditions.

Iron will quickly become unavailable in many soils, so applying inorganic iron fertilisers is often ineffective.

Fortunately, the application of iron chelates to soils does work. Alternatively, foliar application of soluble iron salts is effective and these can be used as an emergency measure to combat iron deficiency.

Zinc, copper and manganese deficiencies can all be corrected by applying soluble fertilisers to soil or in foliar sprays.

Molybdenum requirements are low and its mobility in plant tissue is high, so it can be applied by soil, foliar or seed treatments.

There’s a vast and often bewildering product range to choose from. Whatever your purchasing decision, it’s essential that the micronutrients in your chosen product are in a form that makes them available to the plant.

For fertiliser products, this means that they mustn’t get locked up in the soil. While most micronutrients will remain in the soil after application, both manganese and boron will leach in certain circumstances.

With foliar sprays, the nutrient must be able to get into the plant. As a result, the elements must be soluble so that they can be taken up across the leaf surface. Another important consideration is that they are non-toxic and safe for crop use.

See the AHDB publication Micronutrients for cereals and oilseed rape