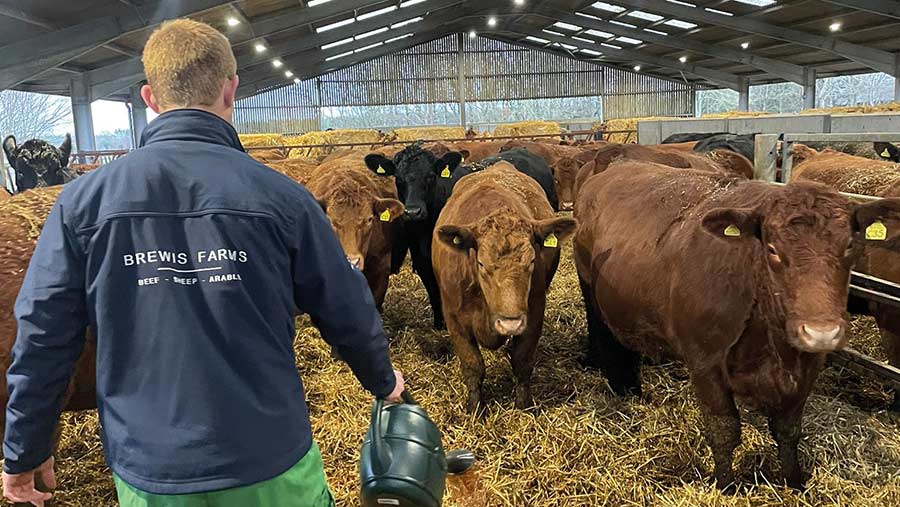 On the north Northumberland coast, mixed farmers Guy Douglas and Peter Brewis are working together to ferment their farmyard manure to create a highly nutritious “soil food source” to enrich their land.

Using the Japanese process “bokashi”, the two farmers are fermenting organic manures under anaerobic conditions, in a bid to improve input efficiency, reduce reliance on artificial fertiliser and, most importantly, enhance soil health.

The technique involves ensiling farmyard manure, inoculated with a mix of microbes to create an optimal soil amendment to promote soil microbiology, while greatly reducing losses of carbon and nitrogen.

Accelerating the carbon cycle, this provides a highly nutritious and readily available fertiliser when applied to the soil, in turn increasing the nutrient availability to subsequent crops.

“The logic behind bokashi is compelling, by inoculating our farmyard manure we can create an easily digestible-biological food source for the bugs in the soil, with the optimum carbon nitrogen ratio of 24:1.

“We already ferment our grass and lucerne to make silage and we know that works, why not do it with our muck too,” explains Mr Douglas.

He found the fermentation process was an effective way of improving efficiency of farmyard manures.

“Bokashi fits extremely well with our farm’s closed-loop system. We work hard to keep our input costs low and try to make them work as efficiently as possible – which is crucial when costs are rising.

“It reduces our reliance on artificial inputs and leaching risks, with the principle aim of improving soil health,” he says.

Every 1t of bokashi applied is said to save 40-50kg of bagged fertiliser. 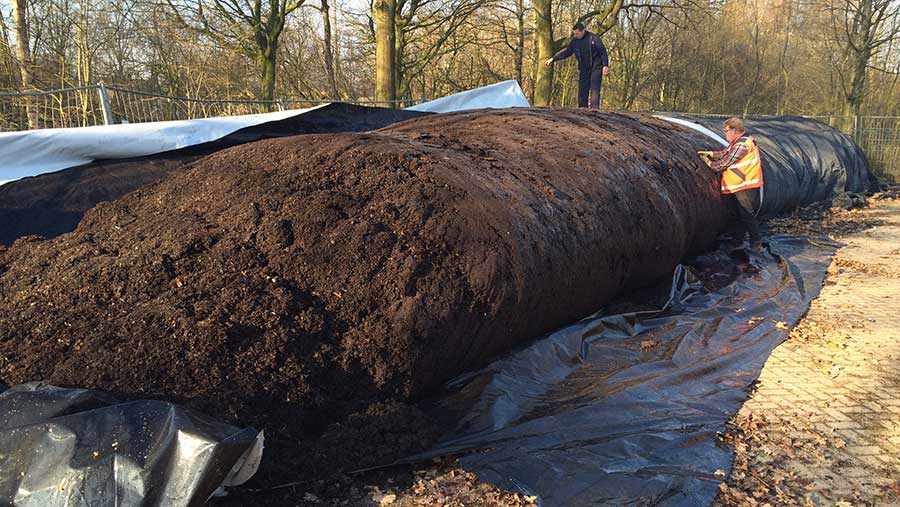 The process begins with the inoculation of cattle bedding over the winter, with either a purchased microbe blend or a home-brewed liquid mix applied.

The purchased product, known as Actiferm from crop product manufacturer Agriton, contains a broad spectrum of bacteria, yeast and fungi, including phototrophic and actinobacteria.

These microbes break down cellulose and lignin, as well as offering nitrogen-fixing capabilities.

Cattle then trample the microbe mix into their bedding into an anaerobic environment, where microbial populations build up, releasing organic acids that, just like silage, kick-start the fermentation process.

Regular applications of fresh straw prevent the pH from dropping too low, allowing the actinobacteria to break apart the lignin for a complete breakdown of organic matter.

Both Mr Douglas and Mr Brewis are now brewing their own microbe mix, which saves a significant 40% on input costs.

Beginning with the “EM1” starter microbe solution from Agriton, they can reduce the cost of the solution they apply from £1.30/litre to less than 80p/litre.

With the addition of water, a heating element and molasses as a food source for the bugs, they brew up their mix in an intermediate bulk container (IBC) for two to four weeks.

They monitor the pH, with the aim of maintaining a pH of between 3.8 and 4.2.

The liquid solution is then applied with a watering can or spot sprayer to the animal bedding.

After the manure is mucked out, it is sheeted and ensiled for a minimum of six to eight weeks, ready to be spread on both arable and grassland during the spring.

The fermented soil amendment is then applied using a conventional muck spreader, with 100t of bokashi estimated to cost about £150 to produce.

“Farmers are well aware of the fermentation process when it comes to silage. We want to harness the power of fermentation and use it to improve the efficiency of farmyard manures in order to improve soil health.

“If we leave a pile of farmyard manure in the corner of a field, a much greater proportion of nitrogen and carbon is lost through nitrogen leaching, carbon dioxide escaping and ammonia being released.

“By composting anaerobically, we’re reducing our carbon footprint and helping to sequester carbon in the soil, where we want it and where it belongs,” Mr Douglas says.

The carbon:nitrogen (C:N) ratio of organic manures has a significant effect on soil biology, nitrogen availability and crop residue decomposition.

To maximise microbial activity in the soil, the optimum ratio of carbon to nitrogen in organic manures is 24:1, as this ratio provides the soil microbes with a perfectly balanced food source.

“By fermenting the organic matter, less carbon is lost to the atmosphere.

“The bokashi process creates a much more effective soil amendment that feeds the soil and accelerates the carbon cycle,” says Mr Douglas.

He points out that he is already “growing” lots of carbon on the farm in the form of straw, which has a C:N ratio of 80:1.

He is keen to use this valuable carbon source in a manner that has the greatest benefit to soil health.

“We need to get that carbon back into the soil in a bug-friendly way to power biological activity.

“If we simply incorporate the straw back into the soil, the microbes have to take nitrogen from the soil in order to break it down,” he says.

By mixing a broad spectrum of soil-friendly microbes in among cattle straw bedding over winter, soil microbes can use the abundant nitrogen in the manure to break down the carbon in the straw efficiently and in an anaerobic manner.

This is why collaboration within the agricultural industry is something he is in favour of.

“If farmers are concerned about taking the risk of trying something new or frustrated by a problem, why not team up with another local farmer to share ideas and meet the challenges we all face today in agriculture?

“This can be really valuable and encourages the implementation of new thinking, techniques, and crops,” he advises.