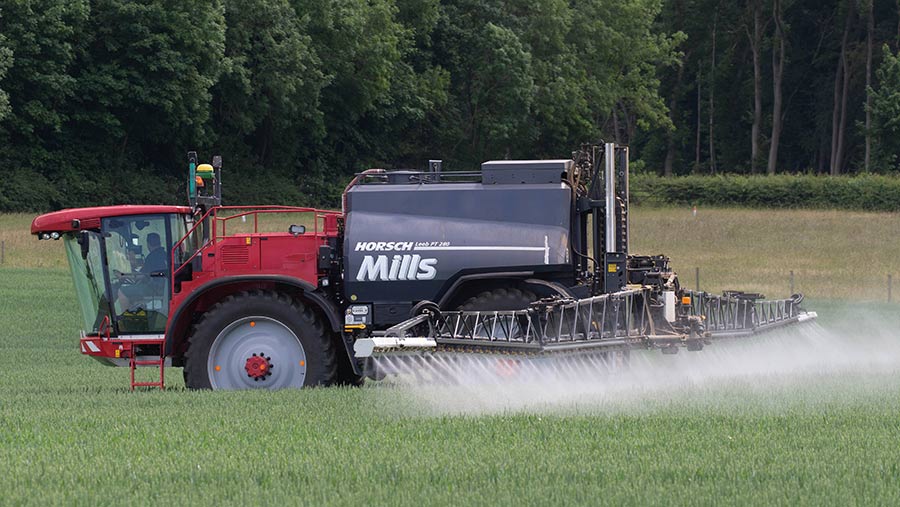 “The formulation provides a precursor to maximise the efficiency of chlorophyll production within the plant under both normal and stress conditions,” says John Murrie, the firm’s technical manager for Scotland and the North West.

Used in both cereals and oilseeds, the biostimulant contains the organic compound pentanoate.

The liquid solution is able to reverse this suppression of chlorophyll, increasing the rate of photosynthesis and gas exchange capacity under stress conditions and, ultimately, improve yield.

It also contains a range of trace elements, which includes:

Derived from plant material, Klorofill should be applied at 1 litre/ha, with applications targeted towards timings when plants are under physiological stress.

The product is available in a fully soluble and tank-mixable liquid formulation, which can be partnered with fungicides, plant growth regulators, additional magnesium and other nutrients.

After a successful trial last year, arable farmer James Anderson is now applying the biostimulant Klorofill to his entire 73ha winter cereals area this season at Newton of Guthrie, in Angus, Scotland.

The trial saw two 5ha plots of winter wheat and barley treated with 1 litre/ha of the product at the T2 flag-leaf timing. This achieved a 0.3-0.4t/ha yield uplift in the wheat, and a 0.6t/ha increase in the barley.

“In the wheat, it looked like someone had been through with an extra 50kg of nitrogen and the difference was clear after just one week,” he tells Farmers Weekly.

“You really could see to the mark where we had applied it – the flag leaf was bigger and greener, and the whole crop looked healthier,” he adds.

Despite the treated winter barley seeing a greater yield increase than the treated wheat crop, Mr Anderson saw no visible difference in the barley.

“It wasn’t until the combine hit the crop, and the yield meter took a jump, we could tell the difference in the areas which received the application,” he says.

Mr Anderson will now treat all of his 43ha of feed and distilling wheat and 30ha of feed winter barley this season. “Even if crops look set up well, after what I saw last year, I’d have no qualms about using it,” he adds.

“We might not always see the same yield increase each year, but you never know what’s round the corner, particularly now with more years of extreme weather. It’s a good insurance product to protect the crop and worth the extra spend,” he concludes.