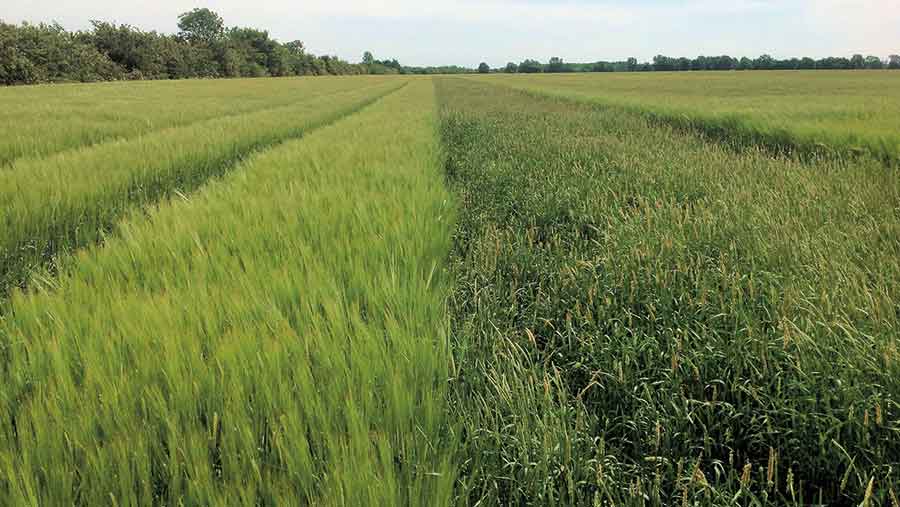 It was escalating blackgrass and declining returns that prompted him into spring cropping, although he had previously seen barley as a weed on his largely wheat and oilseed rape growing farm.

After blackgrass herbicide resistance was detected and as spending on residual weedkillers rose, he decided a change was needed to the farm’s rotation, and the resulting crop of spring barley almost matched the margin of first wheats.

“It’s sobering to see the combine yield meter running along nicely at 10-11t/ha in the wheat, only to plummet to 5t/ha or less whenever you hit a bad blackgrass patch. Something clearly had to change,” he says.

Mr Davison adds that his challenge is to grow 11-12t/ha wheat crops reliably across his whole farm at New Farm, Elsworth, midway between Cambridge and Huntingdon, and blackgrass makes that difficult.

“We considered our options carefully and, despite always having rated barley as little more than a weed itself, decided to grow it for the first time,” he says.

The result was a 10.4t/ha crop of the spring barley malting variety Explorer, which sold for a malting premium to be used in the brewing of Budweiser beer. 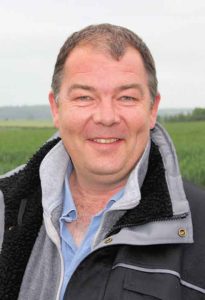 “A high yielding, relatively early maturing variety that can be sown late into March on heavy ground to earn an extra malting premium for a higher nitrogen sample was an attractive proposition. But the clincher for us was the variety’s superior weed-smothering ability,” he says.

Last season, he grew 120ha of Explorer on this Budweiser contract organised by agronomy group Agrii, grain trader Glencore and also Crisp Malting, as part of his 600ha arable rotation.

The spring barley’s blackgrass suppression ability was seen in 2015 as the blackgrass count in the crop averaged 120 ears/sq m, as against 700 ears/sq m in a strip of the field left unsown.

As soon as the crop was harvested in mid-August, the blackgrass beneath it took off like a rocket so giving the bonus of an early glyphosate weed kill in the stubble.

The Budweiser contract pays a £5/t premium over the old favourite malting variety Propino for 1.8-1.9% nitrogen grain and a price equal to Propino for a wider range of 1.60-2.05%. Mr Davison’s 10.4t/ha crop averaged 1.72% nitrogen so received the Propino price.

This performance delivered a gross margin of £950/ha, using 150kg/ha of nitrogen fertiliser, which was just below the farm’s average margin for first wheats.

Mr Land had targeted a 9t/ha crop – with 50 kg/ha of nitrogen in the seed-bed before drilling on 23 March, another 50kg/ha as soon as the crop rows were seen and a final 50kg/ha in late April. “If it hadn’t yielded as well as it did we’d easily have made the Budweiser specification to earn the extra premium,” he says.

This season, Mr Land is again targeting a 9t/ha yield from a similar area of 120ha of Explorer, which the farm is growing as a second successive spring crop. But based on last season’s experience, he has increased the nitrogen fertiliser rate to 170kg/ha – with all the extra in the final split.

They have also been fine tuning micro-nutrition. In response to tissue testing, last season’s crop received extra manganese and magnesium. But this year, copper, zinc and boron will be included as well.

Mr Davison’s next step forward is a new drill for the autumn – an ultra-flexible Sky Easydrill – which moves very little soil on drilling so as not to encourage blackgrass.

“It’s extra capacity will be really valuable in cutting the wheat drilling days we need down from eight to six, giving us more opportunity to delay autumn drilling as late as we dare for the best blackgrass control,” he says.

After the second spring barley in a row, the ground will go into oilseed rape to give a three-year break from wheat.

From now on, Mr Davison intends to have one year of spring barley in every field, with a double spring break wherever blackgrass is especially problematic.