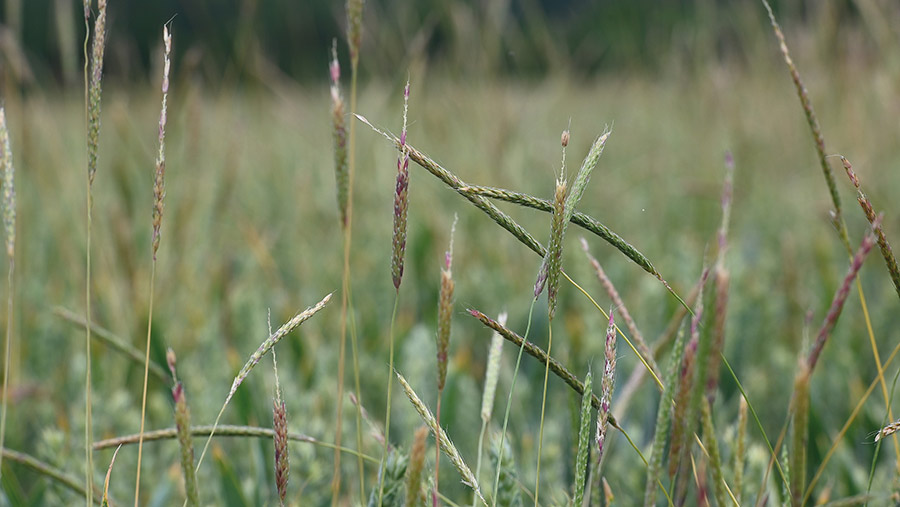 Trials being carried out at a blackgrass research site in Cambridgeshire show that farmers can gain extra control of blackgrass with their integrated approach by taking seed dormancy results into account.

That’s because blackgrass seed dormancy can vary widely between years and the resulting differences in emergence mean growers may need to tailor their cultural and herbicide strategy according to the season.

See also: How to tackle brome and stop it becoming the new blackgrass

Dormancy is a natural adaptation that helps ensure seeds germinate when conditions are suitable, explains Tom Holloway, a Syngenta weed scientist based at Jealott’s Hill International Research Station in Berkshire.

It is largely determined by the conditions when the blackgrass plant is flowering, with hot, dry conditions resulting in low dormancy and cool conditions leading to high dormancy (see “What is dormancy?”). This tends to be in mid-June.

Since 2017, Syngenta has investigated different combinations of cultural measures and herbicide strategies at its Barton Blackgrass Innovation Centre to find the best way of managing blackgrass.

A key part of this work is the interaction between dormancy and the effectiveness of the measures.

Georgina Wood, the company’s technical manager for grassweeds, who also manages the Barton site in Cambridgeshire, points to the large seasonal differences in dormancy. 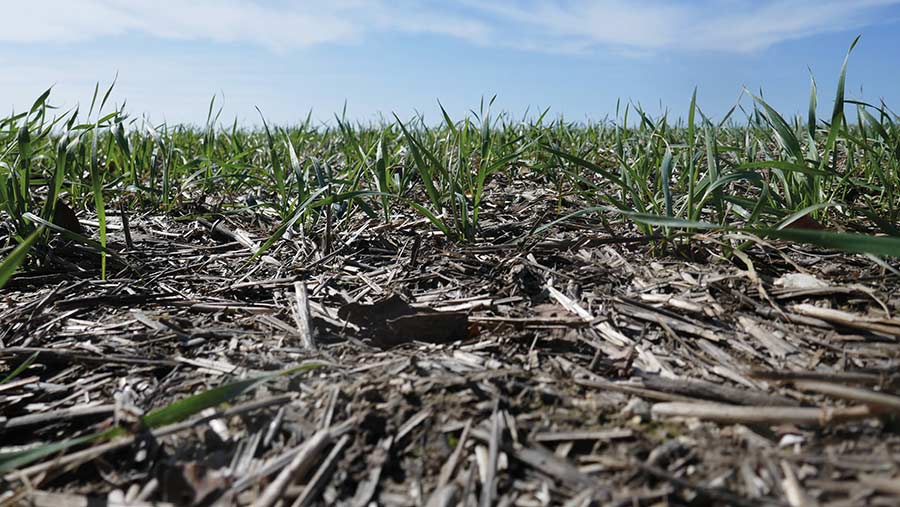 The first three years of the trial saw dormancy range from 18% to 99%.

So why is dormancy important to farmers? The key thing is that it influences when the seeds germinate.

Dr Holloway says if weed seed germinates before autumn drilling, farmers can burn it down with glyphosate, but if it germinates later, it will emerge in crops and can affect yields.

Miss Wood recalls that in year three there was a massive flush of blackgrass before drilling, while in year one, they kept emerging over a longer period.

Dr Holloway adds that autumn conditions also have an influence, so will interact with dormancy. Seed can have a low dormancy, but if soils are bone dry, it still won’t germinate.

Another factor affecting when seed germinates is soil mixing. For example, in a low-dormancy year, if seed is kept on the surface and it germinates quickly, a good, well-timed pre-emergence will take them out, as a higher proportion emerge together.

However, if seed is mixed in the soil by cultivating, you will see a more protracted emergence that is more difficult to manage within the crop.

Dormancy is also associated with seed longevity. He explains that low-dormancy seed is less able to survive and more will die off over time. In contrast, high-dormancy seed is better prepared for long term survival.

It has evolved to time emergence within the cropping cycle, says blackgrass researcher Tom Holloway. “It’s a bet-hedging strategy.”

If conditions are not optimal, you get more dormancy, which spreads out emergence, so that plants are not competing with each other for limited resources.

When conditions are more ideal and seedlings are expected to survive, they can emerge at the same time without worrying about competition.

He says there are two types of dormancy:

Therefore, having high dormancy doesn’t necessarily mean it won’t germinate if given the right conditions.

So what practical lessons can farmers get from the trials? Here are four key findings.

Blackgrass seed on the surface is easier to control in low-dormancy years. Therefore, direct drilling, which keeps soil mixing to a minimum, is the best approach.

However, in a high-dormancy year, control is much more difficult, as there is a protracted germination.

Therefore, Miss Wood suggests that growers can see real value in ploughing in a high-dormancy year, which acts as a reset.

“This avoids the protracted emergence in the following crop by burying seed.”

Miss Wood has looked at different herbicide strategies at Barton and found that a sequenced approach gave the greatest increase in control where  germination is more protracted.

The greatest benefit from a sequence approach was seen in a high-dormancy situation where all seed was left on the surface and the follow-up spray gave a 27% increase in control.

In a low-dormancy situation, the benefit of the follow-up was 22%. And the best control came from applying all of the chemistry together in a large pre-emergence stack.

The chemistry varied between years, but for 2018-19 included flufenacet + diflufenican (Liberator) + prosulfocarb (Defy) + flufenacet (Sunfire) + pendimethalin. However, Miss Wood says one caveat is that a sequenced approach is something growers are more likely to do when drilling earlier to enable follow-up treatments to be applied before the weather turns.

It’s not just differences between years, there are also differences in dormancy between locations, as highlighted by the results for Barton differing from the UK average.

“Last year is a good example, as we didn’t see rain at our site, but other parts of the UK saw a wet June,” says Miss Wood.

She is also investigating differences between crops. “This year, the contrasting weather we experienced during the assessment of blackgrass seed viability testing indicates we may have some fields with low-dormancy blackgrass seed that matured early in winter cropping in hot, dry conditions, along with fields of high dormancy from later-maturing blackgrass among spring crops, when conditions were cool and damp.”

Dormancy of the different populations will be tested and it will give her the opportunity to directly compare performance of the same herbicide mixes, oriented towards stacks and sequences, under the same environmental conditions.

“The aim is to give growers clear advice on how future decisions can be best tailored to specific seasonal situations.”

Work is still ongoing, but it may mean growers should do their own testing to get the most from control measures, suggests Miss Wood.

Adas weed specialist Lynn Tatnell agrees that carrying out dormancy testing is a good thing to do. “It’s an extra tool to help farmers decide on the best measures before the next crop goes in.”

However, it’s critical to send seed immediately and to test ASAP, she points out.

Dr Holloway has looked at the effect of overwintering blackgrass seedlings. In spring, not only do you get three times less seed being produced from each plant, it has lower dormancy and lower longevity.