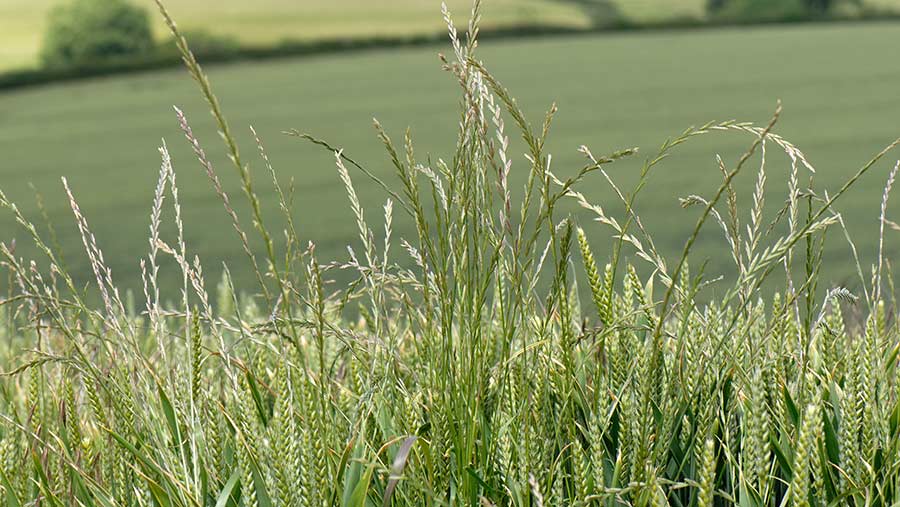 In the space of 10 years, one Essex farmer has improved a ryegrass problem, which had resulted in fields of wheat being cut for silage, to a situation where this year’s crops are largely clean of the weed. 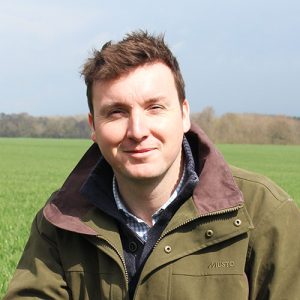 Daniel Wormell, who farms the 600ha family farm, says ryegrass has been a problem for more than two decades at Langenhoe Hall Farm, situated close to the north Essex coast.

“We don’t know where it came from, but it may be from herbage seed crops that were previously grown on the farm.”

Testing revealed that Mr Wormell has triple-R resistant ryegrass and he decided something had to change.

He set out to tackle the problem alongside agronomist Sara Osbourne of Prime Agriculture, with an integrated approach – largely based on the Rothamsted advice for blackgrass – which is a combination of cultural approaches and chemistry.

It is proving successful and the fields that had been silaged 10 years ago are now looking clean, with very low populations. Wheat yield targets are now 11t/ha, whereas nine or 10 years ago he would have been happy with 7.5t/ha.

However, “you cannot be complacent,” he says, highlighting last season’s blip.

“The dry autumn [2018] conditions meant pre-emergence herbicides were less effective, which was a step back for us in terms of control.”

Rotational ploughing is a valuable part of Mr Wormell’s approach, but it has to be good-quality ploughing with full inversion of the furrow to bury the seed.

Ploughing is carried out in the autumn on land destined for spring wheat.

“It weathers down over winter and then we move as little soil as we can in the following spring.”

The thinking is that the seed is buried and in the years between, only the surface is moved.

A key change that enabled later drilling was the purchase of an 8m Dale Ecodrill. Delayed drilling gives more time for stale seed-beds, and means there is usually more moisture around for the pre-ems to work well.

“We used to drill at the end of September, when Atlantis (iodosulfuron + mesosulfuron) was first introduced with the aim of creating a competitive crop, and trying to ensure that the Atlantis applications were made in optimal growing conditions.

“Now we are seeing less control from post-emergence products across the board, the approach has had to change,’’ says Mr Wormell.

Previously, he had a Horsch CO4 and because the aim was to drill later into the season it could cause issues if the weather was wet on his heavy soils.

“We sometimes got caught out as the packer could block and stop turning in wet conditions,’’ he says.

Drilling is now carried out mid- to late October onwards, depending on conditions. “We aim to drill only if conditions are right, after there has been a flush of weeds and with moisture present in the soil.”

Being too dry is a problem, which is why he held off until mid-November last autumn, to ensure there was sufficient moisture for the pre-emergence herbicides.

“Even then, last year soil moisture wasn’t ideal and we suffered with compromised weed control throughout the season,’’ he says.

To encourage a chit of ryegrass for some direct-drilled first wheats, Mr Wormell will run a stubble rake after the combine followed by rolls and one or two applications of glyphosate.

“We may rake again if there is some moisture to encourage germination.”

“Ideally we would like to see a chit before starting any primary cultivation, but this depends on the weather in August,’’ he adds.

Just five years ago, there were no spring crops in the rotation at Langenhoe Hall Farm and now there is spring linseed and spring milling wheat.

“We are on heavy clay soils and we were always wary about growing spring crops,’’ says Mr Wormell.

However, he believes the key to making it work is ploughing in autumn and then drilling in spring with the low-disturbance Dale Ecodrill.

“It gives us flexibility, as it can direct drill wheat in the autumn and also drill cultivated land.”

However, Mr Wormell grows wheat as he can consistently hit milling specification whereas meeting malting barley specs is more of a challenge on his soils.

His two spring crops also have different drilling dates (February/March for spring wheat and March/April for linseed), as it helps stop the weed adapting to the system.

He bales most of his straw and believes it helps reduce seed return. Mr Wormell points to Australian farmers, who are experienced at managing ryegrass, using chaff decks and mills to manage seed.

“Unlike blackgrass, there is still a lot of seed in the head at harvest. So if you bale straw, you are going to take some of the seed out,” he says.

He hits the weed hard with a pre-emergence stack based on Crystal (flufenacet + pendimethalin) plus diflufenican and Defy (prosulfocarb). Where needed, he will follow with a top up of pendimethlin with a peri-/post-emergence application of Atlantis.

One key difference with blackgrass is spring germination, although these plants tend to be less competitive with less seed return.

In oilseed rape, he relies on carbetamide and propyzamide, as differing modes of action targeting ryegrass.

Seed rates have been upped to increase crop competition, aiming for 500 seeds/sq m with mid-October drilling.

Finally, Mr Wormell says it can be a battle. “Every decision you make on cropping and rotation is driven by its impact on ryegrass.

“It is a long-term approach and you need to keep confusing the weed. What the weed likes is repeated min-till, repeated winter cropping and the same chemistry,” he says.

A survey of UK growers reveals that 60% have a ryegrass problem and one-third said the situation is getting worse.

“But we know that it is both more competitive to cereal crops and is getting increasingly difficult to control.

The Syngenta State of the Nation survey also revealed that 17% of growers were starting to see the benefits of an integrated crop management (ICM) approach.

However, only 10% felt they had it well under control with significant improvements.

Of the integrated measures deployed by growers, spraying off heavily infested crop patches was viewed as the most effective control option, followed by more spring cropping.

Increased herbicide stacking was also seen as an effective measure (45%).

One early observation is that farmers can still get good control with the right pre-emergence hit.

“The pre-emergence Defy (prosulfocarb) stack, in combination with flufenecet and diflufenican, achieved over 95% ryegrass control in a challenging infestation,” says Syngenta’s Cat Gray.

Other factors being investigated at the site include seed rates and rotations including the possible role of hybrid barleys.

She adds that they are also looking at row orientation, drilling east/west versus north/south, as there is more shading of weeds between rows.