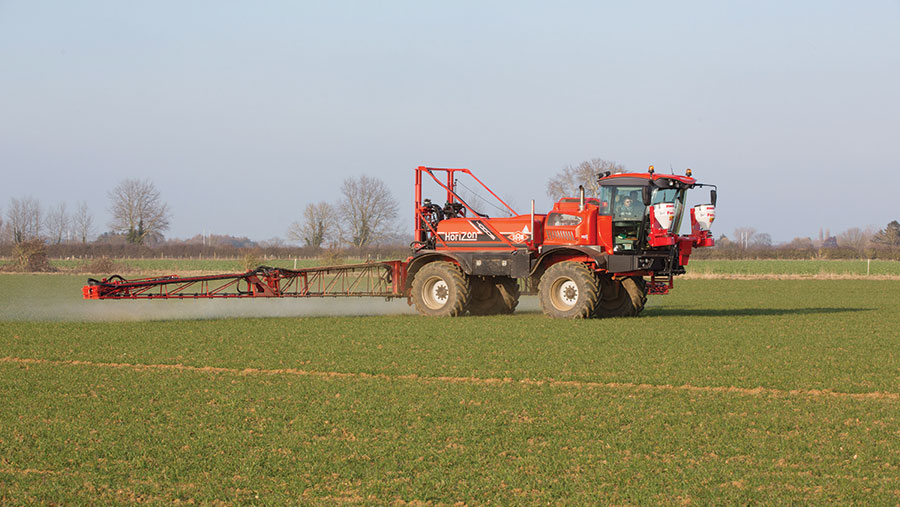 It is shaping up to be a tough spring for controlling weeds, as the legacy of the wet autumn and winter means many crops are at greater risk of yields losses if weeds are allowed to get established in the coming weeks.

Significant areas were left uncropped in the wettest parts of the UK, resulting in more unplanned spring cropping on land that will take time and effort before it’s ready for drilling.

Many autumn-sown crops did not receive their usual pre-emergence herbicide programmes, while others established poorly and therefore lack competitiveness.

This means large, vigorous, overwintered weeds could be more yield-damaging and harder to control this spring.

A big flush of any weed, especially blackgrass, that is allowed to set seed, could easily set back years of hard work.

Here are some pointers for winter cereals, spring crops and oilseed rape.

While some crops in drier regions and those drilled early received an effective residual pre-emergence spray, others have gone untreated where spraying was impossible.

However, weed pressure is significant where no pre-emergence was applied, especially on later-sown crops in wetter areas. “Crops aren’t as advanced and are more open, so lack the usual competitiveness.”

Well-timed post-emergence herbicides will be important, and success requires applying products early to small, growing weeds, which will more easily take up actives and are less able to detoxify them than larger weeds.

“With blackgrass, for example, spraying before it starts tillering gives a much better chance of control,” says Mr Cotton.

He suggests combining a sulfonylurea-based product, such as Atlantis or Hatra, with the residual chemistry in Liberator to control established and emerging grassweeds.

For any weed, timing herbicide sprays correctly is a balancing act. Avoid spraying too early, as weeds may not have emerged and residual activity could run out by the time they come through, he advises.

“Assess every field individually and prioritise those to treat first. If there is an opportunity to combine herbicides with the T0 fungicide, be aware of label restrictions. For example, Atlantis cannot be mixed with tebuconazole.”

Reducing weed populations to prevent seed return is the most effective anti-resistance strategy, he says.

If grassweeds are the priority, Mr Coombs recommends applying Monolith at 0.33 kg/ha.

Whereas the three sulfonylureas in Pacifica Plus, applied at 0.4-0.5 litres/ha (depending on weed spectrum), may be more suitable where more broad-leaved weed control is needed.

In either case, include 1 litre/ha of the adjuvant Biopower.

In severe weed pressure situations, there may be no other option than to spray off areas of crop with glyphosate to avoid a large weed seed return.

This is a hard decision given the difficulties of the season, but should be made sooner rather than later – ideally before applying spring fertiliser and fungicides.

“Ideally, Broadway Star should always be used with a residual partner such as pendimethalin as part of a programme based on a combination of actives that includes a pre-emergence residual.

“That’s been harder to do this season, so anyone applying Broadway Star must do so carefully for optimum control and resistance management.”

Tips for maximising post-emergence performance include:

Growers should minimise soil disturbance before and during drilling and spray off overwintered and newly emerged weeds with glyphosate beforehand.

It may be tempting to wait for the main flush of spring-germinating weeds, but in the case of blackgrass, this doesn’t usually occur until the first week of April.

This is too long to wait before drilling cereals such as spring barley, says Dick Neale, technical manager at Hutchinsons.

Drilling late leaves less time for barley to establish and build yield, and risks conditions being too dry for residual chemistry to work.

Mr Neale says other crops better suited to late drilling – or even managed fallow or a cover crop – may be better in some circumstances.

For spring cereals, growers are better off drilling as soon as soil conditions allow, applying an effective flufenacet-based pre-emergence herbicide and maximising crop establishment and competitiveness, such as by including starter fertilisers and using higher seed rates, he adds.

He recommends sowing spring barley at 450-500 seeds/sq m, whereas spring wheat may need to be nearer 600/sq m due to its lower tillering capacity.

“You must be realistic about establishment, especially on heavy land or sub-optimal conditions.”

Also consider halving seed rate and drilling twice, at a 30-45deg angle, he suggests. “It takes twice as long, but can be a very effective way of increasing crop competition and establishment.”

Liberator is the main residual pre-emergence option for grassweed control in spring barley, and Mr Coombs says it is best applied to moist soils within 48 hours of drilling, at 0.3 litres/ha.

It can also be applied in spring wheat, before growth stage 14.

He points out that where crops have gone into cloddy seed-beds, there could be protracted germination of grassweeds and broad-leaved weeds as clods break down, exposing fresh seeds.

Where growers have struggled to apply autumn/winter herbicides to oilseed rape, weed pressure should be monitored closely.

Crawler can be applied to the end of February for grassweed control, providing a useful alternative mode of action for populations resistant to other actives, says independent agronomist Andrew Cotton.

Many rape crops in his area received Kerb or Astrokerb over the autumn.

He says Astrokerb has controlled thistles and mayweed, but does not control cleavers, and a follow-up treatment may also be required where straight Kerb was used.

Galera is one option that can be applied from the four-leaf stage of the crop up to just before flower buds are visible above the canopy. Belkar can be applied earlier, but is slightly less effective on mayweed, he says.

Another option where cleavers aren’t an issue is Dow Shield, which offers relatively cheap control of mayweed and thistles.