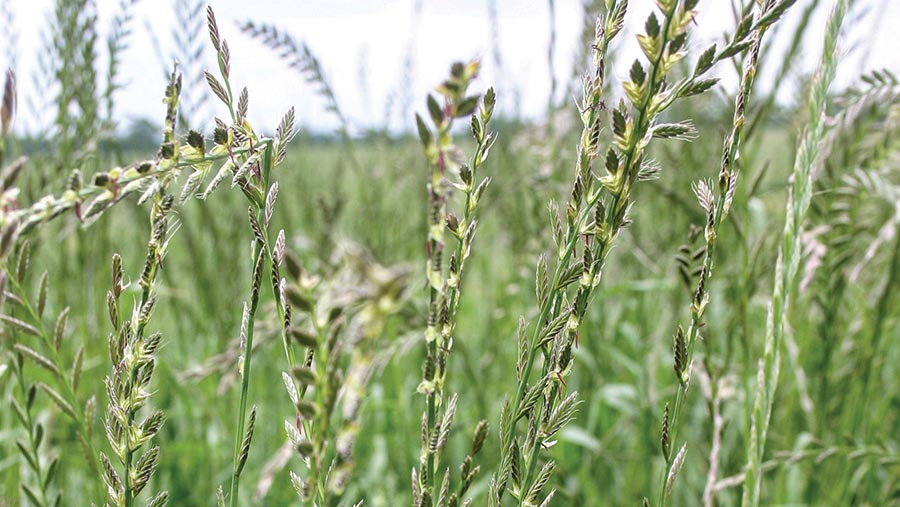 Results from the UK’s largest survey on Italian ryegrass has shown a complex and variable picture of herbicide resistance in the weed, emphasising the need for growers to test and understand the populations on their farms to achieve better control.

However, rising levels of resistance to commonly used herbicides are not the only cause of control difficulties, reveals weed specialist John Cussans of Niab, who also highlights application timing and better use of diversified modes of action as important actions.

“There is scope to improve practice, as there are too many fire brigade treatments being made,” he advises.

“It’s a complicated landscape when it comes to resistance mechanisms, but better attention to detail will help to avoid poor decision-making.”

Conducted by Niab with funding from Bayer, the survey of 197 samples from across the country investigated current on-farm control practice, as well as testing each Italian ryegrass sample for sensitivity to flufenacet, pinoxaden (Axial) and ALS herbicides (Atlantis).

In addition, 22 of the weed samples were used in a cross-resistance study, to understand any correlations between sensitivity to a wide range of herbicides, including glyphosate.

“The fact that a large number of samples are still susceptible to herbicides goes against the perception that many have about post-emergence chemistry.”

Dropping the use of perfectly good herbicides tends to happen when the resistance threat is exaggerated, he explains, which is why a better understanding of the situation on individual farms is so important.

When it comes to pre-emergence herbicides, all 197 samples were tested for sensitivity to straight flufenacet.

One-third of them showed either reduced sensitivity or resistance, reflecting that the selection pressure has been there for some time.

“If you pile on flufenacet, you will select resistance to it,” he says. “Of course, in practice it isn’t used alone – it is tank-mixed and sequenced with other actives.”

There are some populations of Italian ryegrass that are completely resistant to flufenacet – which makes it different to the situation with blackgrass, where there has been a shift in sensitivity, rather than complete failure.

Further analysis showed regional differences between the three herbicides tested, with control from flufenacet being lower in the South East, North and Midlands.

“If you have an emerging issue with pre-emergence herbicides, you need to know about it. Get resistance testing done, preferably on a field-by-field basis – national statistics will make no difference to managing your weed populations.”

A subset of 22 populations was used to test more herbicides and understand any correlations between them, as well as to look at glyphosate sensitivity.

“Broadening the base by combining modes of action helps to stabilise ryegrass control. That fact that we have two new modes of action this year in aclonifen and cinmethylin, and another coming next year, will help.”

Having a stronger, more diverse base for Italian ryegrass control is important, he stresses.

“Ryegrass is more capable of overcoming herbicides and we know there is a degree of cross-resistance between existing pre-emergence chemistry.

“For this reason, it’s important to combine modes of action.”

There has been a shift in sensitivity to glyphosate in some problematic UK Italian ryegrass populations, but it is not resistance, confirms John Cussans.

The status of 50 difficult weed populations collected in 2019 was checked for their sensitivity to glyphosate at a range of doses, with some variation showing.

“We do not have glyphosate resistance in the UK, but we are as close as we’ve ever been to it,” he cautions. “That’s why we must monitor it and steward the product.”

“We must avoid any survivors of glyphosate applications going on to set seed.”

As a result, growers must take ownership of this issue and follow published guidance, he advises.

That is a view shared by Roger Bradbury, technical specialist at Bayer, who stresses the need to apply glyphosate at the right time, with the right dose for the target weed and with good application technique.

He refers growers to the latest Weed Resistance Action Group guidelines, which recommend a maximum of two glyphosate applications after harvest, before drilling the next crop, and stress the importance of monitoring herbicide performance and investigating any reasons for poor control.

“Everyone needs to be aware of the risks and do all they can to prevent resistance to selective herbicides.”

Bayer’s Proclus (aclonifen) has been approved in a tank-mix with Liberator (flufenacet +  diflufenican) for pre-emergence weed control in winter barley, adding a new mode of action and expanding the options for grassweed control in the crop.

A lower application rate of 1 litre/ha + 0.6 litre/ha Liberator, compared with 1.4 litres/ha in winter wheat, means the levels of weed control are slightly less – with a 7% uplift in Italian ryegrass recorded in Bayer trials and a 5-6% improvement in blackgrass control.

Winter barley’s earlier drilling date and more limited herbicide choice can make it a challenging crop for weeds, says Bayer’s Tom Chillcott, who points out that including aclonifen in the pre-emergence mix gives more protection and helps with resistance management.

“Having a new mode of action in barley adds another layer of protection and helps to take the selection pressure off flufenacet.”

As aclonifen sits on the soil surface, weeds have to grow up through it before it takes effect, he adds.

“That means seed-bed preparation, drilling depth and application timing all matter, especially as aclonifen can be a bit hot in some scenarios, and barley is a more sensitive crop.”

A minimum sowing depth of 3.2cm and application within 48 hours are important, as is avoiding heavy rain soon after application.

It will be sold as a co-pack of Proclus and Liberator, as in wheat, and will add £10/ha to pre-emergence costs in barley.