Mechanical weeders could be one way to manage weeds that are proving more difficult to tackle because of resistance and a dwindling number of actives.

However, with several different models on the market, each with a different weeding method, which is the most effective?

In addition, do any machines achieve sufficient weed control that would enable conventional growers to drastically slash their chemical spray programme?

Here is a round-up of five different machines currently on the market. 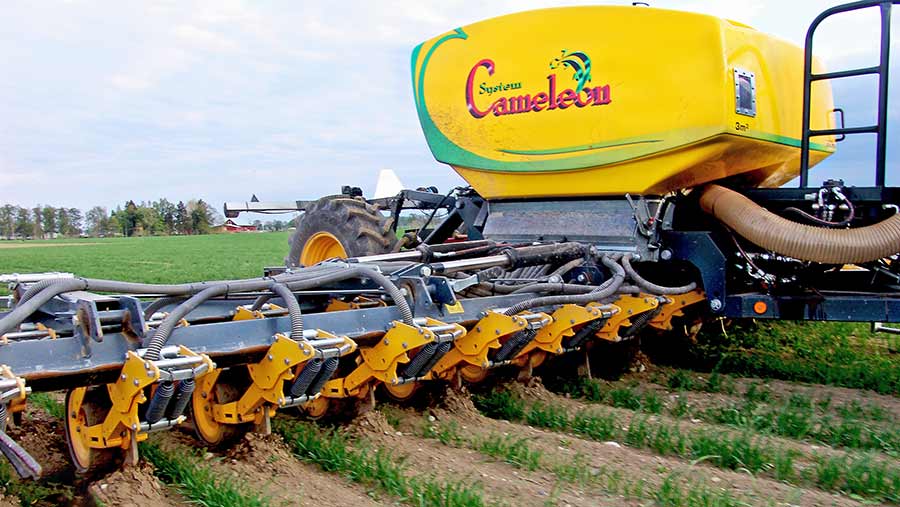 Manufactured in Sweden by Gothia Redskap, the System Cameleon is two machines in one.

As a standard 8m drill, a series of independent, contour-following coulters on parallel linkages gives ultra-accurate side-to-side seed placement along the row.

Combined with increased row spacing of 25cm to produce a thicker crop more able to compete with weeds and more room for the drill’s second use as an inter-row hoe, means up to 40% more soil surface area can be weeded over conventional systems.

A hydraulic side-shift on the main frame shifts the coulters half a row width across to the left to sit inter-row.

The Cameleon can run in cereals at both early and late stages, right up until ear-emergence. 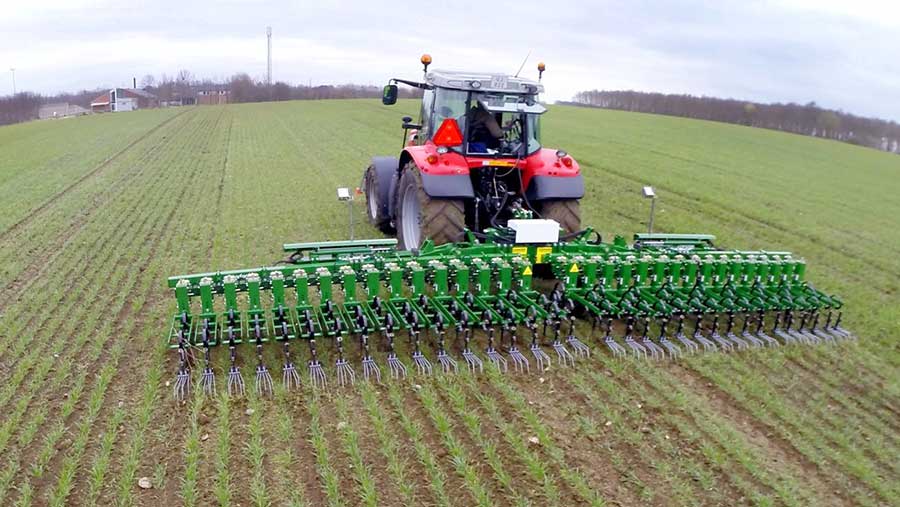 About 1.5sq m of crop foliage ahead of the hoe is captured via a camera and processed by a computer to keep the equipment in line with the crop rows via a hydraulic side shift.

As long as the crop presents more foliage than the weed material, the combination of comparing multiple rows simultaneously to a predetermined grid pattern based on crop row spacing means highly accurate and fast weeding can be achieved in grain crops sown at 125mm spacings. 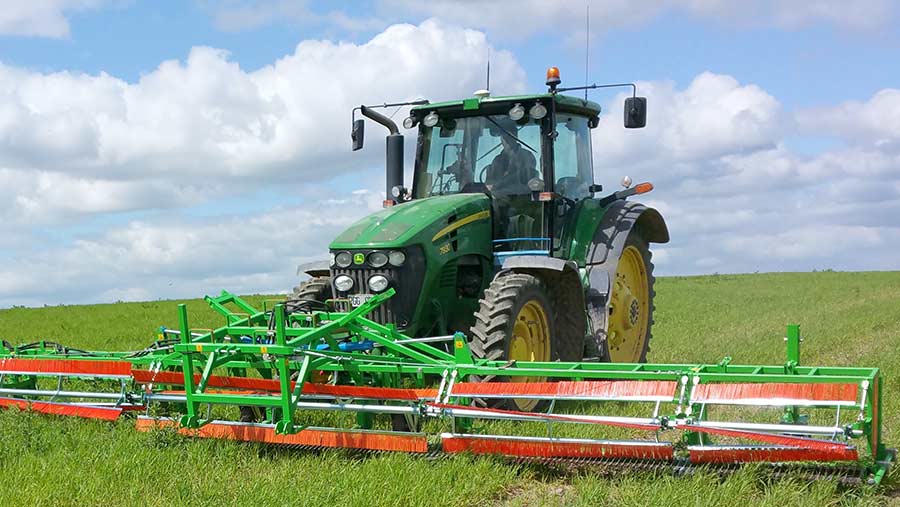 Also designed in Sweden, this time by an organic farmer, the CombCut’s fixed blades exploit the physical differences between flexible grass crops and thicker-stemmed weeds such as charlock, docks and thistles, allowing them to be removed from within a growing crop.

About 8ha/hour can be cut by a 6m model, with 8m and 9m models also available.

The fixed-blade comb can be used within cereal crops up until inter-nodal extension, and can then be used again to prevent weed seed dispersal by cutting the flowers and seed head of weeds above the crop, including blackgrass.

When used as part of a wider weed management strategy, the CombCut is capable of reducing the weed burden over time. 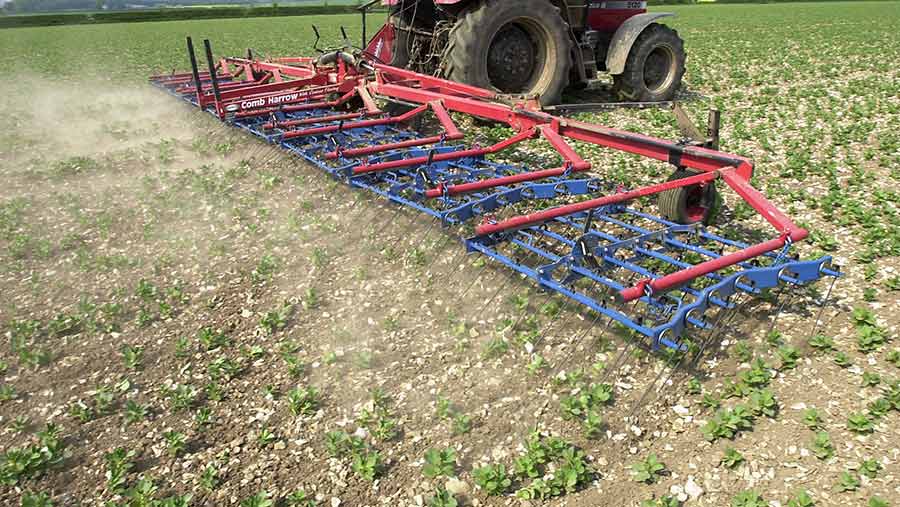 Costing the same as a pass with the sprayer, the tines, which can be adjusted to the type of weed to be pulled or smothered, can significantly decrease the number of spray applications made.

The 48 tines are spaced 30mm apart on each 1.5m tube-framed bed and can be adjusted centrally to 10 different angles to produce the required aggressiveness or tine pressure to ensure the vibrating action of the triple-coil spring tines is maximised.

The flexible design of the harrow, available from 1.5m to 24m working width, means each one follows the contours of the land to ensure effective coverage, and also self-cleans as it moves through the weeds. 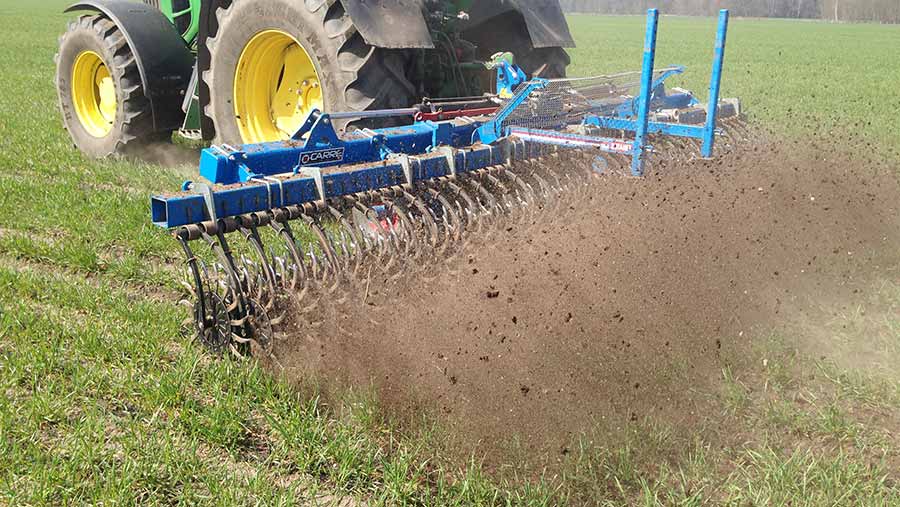 Breaking the surface-sealing crust helps to reduce soil erosion by allowing water penetration, while only working to 2cm preserves the organic composition of the soil.

Independent mounting of the wheels makes it possible to have a uniform stress on each wheel and absorb irregularities in terrain, with both standard and high-pressure springs available for harder soils.

Fixed models are available from 3m, and folding models up to 10m.

To look at the effectiveness of different weeders, the Royal Agricultural University (RAU) carried out a trial in 2017 comparing four different machines in an organic system – a Garford Robocrop inter-row weeder, a CombCut, an Opico comb harrow and a Carre rotanet.

The trial was held at the university’s Harnhill Manor Farm, near Cirencester, where a crop of milling wheat variety Illustrious was drilled on typical Costwold brash soil using a power harrow combination drill after ploughing at 300 seeds/sq m.

Each weeder was tested over two 100x12m plots, with one weeded once and the other twice.  There were also two control plots with no weeding done so the full effect of the weeders and the number of weedings on both weed growth and wheat growth could be analysed.

Roundabouts field, where the trial was held, has high weed pressure of mainly broad-leaved species, such as speedwell, dead nettle and charlock.

The trial revealed the best results are likely to be achieved through the combination of several machines with different weeding methods to tackle weeds at different stages.

In the trial, the plot that was weeded by both the Opico and the CombCut yielded the most, as the CombCut’s weeding method means it cannot be used until later in the season.

However, it also showed that removing every weed from a crop is likely to result in a stressed crop due to the increased wheelings.

Timing was also shown to be key, as weeding occurs at a very sensitive stage in crop growth. The optimum time for weeding will be machine dependent, as the Garford Robocrop must be used much earlier in the season than other weeders to make use of the camera-guided hoe.

Ultimately, a weed control strategy that relies on various elements, such as mechanical weeding supported by a minimal chemical programme, is needed to prevent a severe weed infestation.