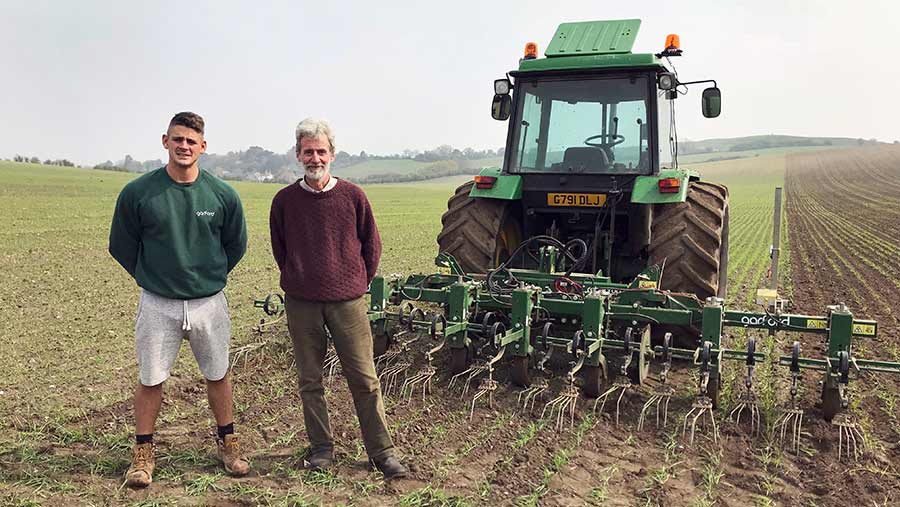 Since starting to weed his cereal crops five years ago with a Garford mechanical hoe, organic grower Robert Hyde hasn’t lost any of his crops to weeds.

In the past Mr Hyde relied on closely spaced rows to compete out aggressive weeds, with only limited success, losing areas of crop to corn marigold.

Now the camera-guided mechanical hoe is allowing him to achieve 3.7t/ha for his spring barley at a cost of just £1.25/ha per season in wearing parts and diesel, making two passes with the machine.

Watch the video of how the weeder works in detail and read the full report below.

Fifth generation grower Mr Hyde has been farming 323ha of mainly tenanted farm at Wool, Dorset, completely organically for 20 years, after converting from conventional farming in response to demand from his customers.

His low-input system produces both winter and spring oats, winter rye and spring barley, alongside lupins and short-term grass leys to support his flock of 500 rare breed Dorset Down sheep.

Being on soils ranging from sand and gravel to chalk, the farm’s two main weed issues are charlock on the chalk and corn marigold on the sand.

Before switching to the Garford hoe, Mr Hyde used a weed rake for five years, but it’s success was limited as it often failed to pull out the charlock.

He says the hoe has no such issues, dealing with both weeds effectively.

“Most people’s hated weed is charlock, but corn marigold is worse. It looks innocuous – small and weak looking, but once it gets going it never stops,” he says.

Corn marigolds flower continuously from June to September, and can produce 13,500 seeds per plant.

“Where we used to get areas of fields which would be lost to corn marigold, since using the hoe we haven’t had a failed crop,” he says.

“It’s not an exaggeration to say that it has revolutionised our organic cereal growing.”

Before committing to the Garford hoe, Mr Hyde researched the machine for a couple of years to satisfy himself that it would definitely work on his farm.

Switching to mechanical weeding required a fundamental change from narrow rows, which were being used to compete out weeds, to 25cm wide rows.

The bespoke hoe has been specified to match the farm’s 4m Vaderstad Rapid drill, as hoe and drill must match perfectly for the system to work.

A camera trained on three rows of the crop can detect even the faintest indication of a line and follow it, adjusting the hoe by up to 30cm sideways to prevent it crossing the rows.

Peter Ewan, the farm’s arable operator, says: “The camera will find a row. It doesn’t matter if the tip has barely broken the soil, and it can detect the row long after the weeds have taken over,”

The technology also allows the user to choose a specific shade of green to identify, which is of particular use in fields with a heavy weed burden.

Users can also change the detected colour entirely – helpful for weeding rye crops as these have a purple tinge on emergence.

The accuracy of the camera guidance means around 90% of the weed burden is removed with each pass, leaving just the weeds in-row with the crop, without causing any damage.

Despite not utilising GPS for the first three years, Mr Ewan is able to weed about 24ha a day for the first pass when the crops are smaller, increasing to 40ha a day for a second or third pass in a spring crop.

The key to keeping weeds under control is to use the hoe as soon as it can detect a row, if conditions are good.

A share runs about 2.5cm below the soil surface, decapitating weeds, while the following tines clear out smaller weeds on the surface.

“If you miss your opportunity and the weather goes against you then you are going to have a problem,” says Mr Hyde. “It’s not happened to us, but it is a possibility.”

Rather than miss the opportunity entirely, the hoe will occasionally be used in compromised conditions, although the share will not move as much soil as it would in dry conditions, allowing weed roots to continue growing.

Conditions were less than ideal in February this season when the winter oats were weeded, meaning they are likely to receive another pass.

The crops are then weeded once in the autumn as soon as they have emerged, before a second weeding in the spring.

After the second weeding the crop should be competitive and move fast enough to shade out the weeds. A third pass is sometimes tempting, but means additional cost.

Spring cereals are also weeded for the first time as soon as a row can be detected, usually 20 days after drilling, which this year was in the middle of April, and then weeded again 20 days after the first pass.

If weather conditions turn wet, the crops might be weeded a third time, but this is unusual.

One of the main reasons for not weeding a third time in spring cereals is the risk of damage to the growing tip in the crop, especially as Mr Hyde chooses not to use tramlines as he would lose two rows in every 16 across the entire field.

Instead, he pulls the hoe using a John Deere 2850 on low pressure tyres.

Mr Ewan says: “You can see evidence in places of where the tractor has been over, but it doesn’t kill the crop by any means, it’s just a bit shorter.”

Travelling over the crop once the growing tip has appeared risks creating disease issues, but this has to be weighed against the effect of a heavy weed burden.

Although research has suggested that getting the best results from mechanical weeding requires multiple machines, Mr Hyde is happy with his current set up.

“If I wanted the ultimate I would use other tools, but that would be going down the route of tramlines and wheelings.

“One fundamental rule that we have is to look after the soil and don’t create wheelings.

“The hoe is the only tool which uses the same wheel track more than once because it has to,” he says.

Mr Hyde also utilises his flock to help keep down the weed burden, allowing them to graze winter cereals for up to a week in addition to the cover crops.

“Any sensible sheep will like a varied diet and will eat weeds as much as the crop,” he says.

Although Mr Hyde tries to limit the number of passes made with the weeder to limit the damage on the crop, disturbing the soil also brings nutritional benefits. 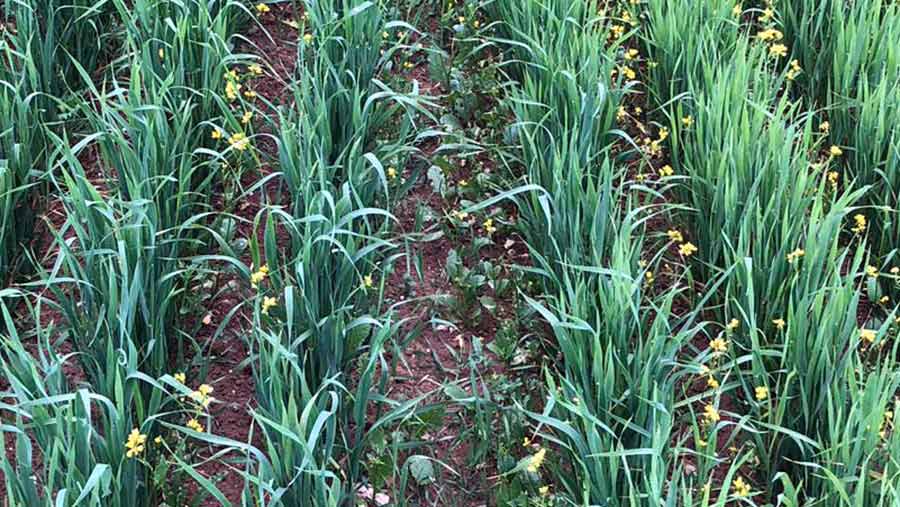 Releasing the cap on the soil drives in atmospheric nitrogen to the roots and gives crops a noticeable boost, due to mineralisation of nitrogen from organic matter.

“We wouldn’t miss an opportunity to go in with the weeder because of the effect it has on the crop,” Mr Ewan says.

“Weeding three times in a season is the equivalent of 50kg of nitrogen per acre.”