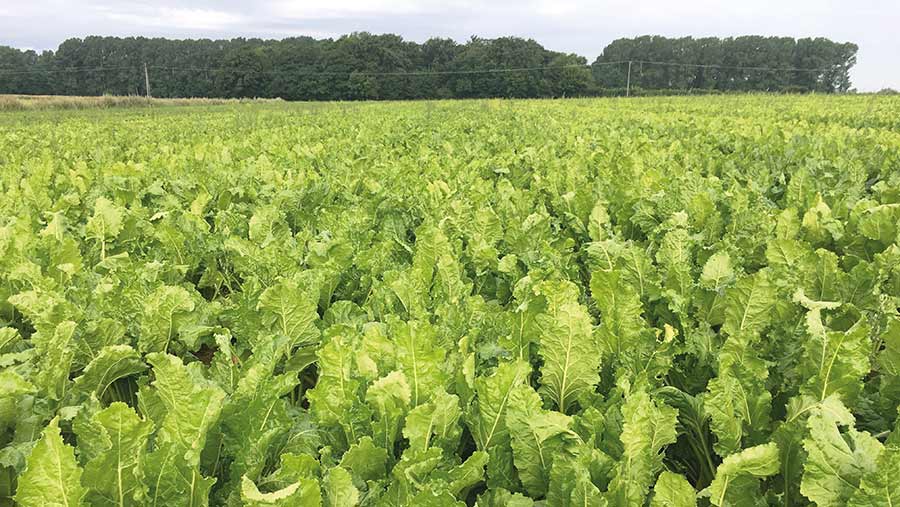 Weeds can have a significant impact on sugar beet yields and this is reflected in the money growers spend each year on chemical control with herbicides.

However, at a time when many are looking to reduce reliance on solutions derived from a can, maximising the suppressive effect of vigorous crop canopy on weed growth may help achieve that goal.

A standard recommendation for plant population is 100,000 plants/ha established and achieving this target will give maximum crop competition against weeds.

“Actual drilling rate needs to be based on expected establishment losses, which can vary between 5% and 35% depending on soil type and conditions.

“Experience shows that cultivations are key to seed-bed quality. Adjusting rates according to those conditions and expected plant establishment will pay dividends, one of which is better weed control.”

To the same end, crop nutrition will help crops establish and reach the eight to 10 leaf stage – about 20-30% crop cover – more quickly, helping to smother weeds out as early as possible in the growing season.

For many growers, factoring in weed control when choosing which variety to grow is an alien concept, but there are differences in canopy architecture that mean some are better than others at suppressing weeds.

Dr Bowen says the degree to which these differences manifest themselves can vary from season to season, with this year’s ideal growing conditions making variation between varieties much more noticeable.

In 2021 BBRO trials, some varieties – particularly those from breeder KWS – have shown very upright canopies with long leaf petioles, which never made full ground cover across rows.

Conversely, other varieties with short petioles tend to be more prostrate, spreading across the ground to smother out weeds more effectively. There are also differences in leaf size, with bigger leaves improving the smothering effect.

“I think we underestimate the role of a full canopy in weed control, particularly later in the season when the crop does begin to open up. If they aren’t full cover then weeds such as fat hen can quickly come through and pose a problem.”

Growers are advised to get a feel for the growth habit of any varieties being considered for 2022 and choose prostrate (spreading) types on weedy sites – particularly those prone to infestation with tall weeds such as fat hen.

BBRO will be scoring varieties for canopy growth across a range of sites and soil types this year and will communicate with growers in due course, adding an additional layer of information in the decision-making process.

“There are some different choices there. We often just focus on the chemistry, but variety should also certainly be a part of the equation when it comes to weed control,” says Dr Bowen.