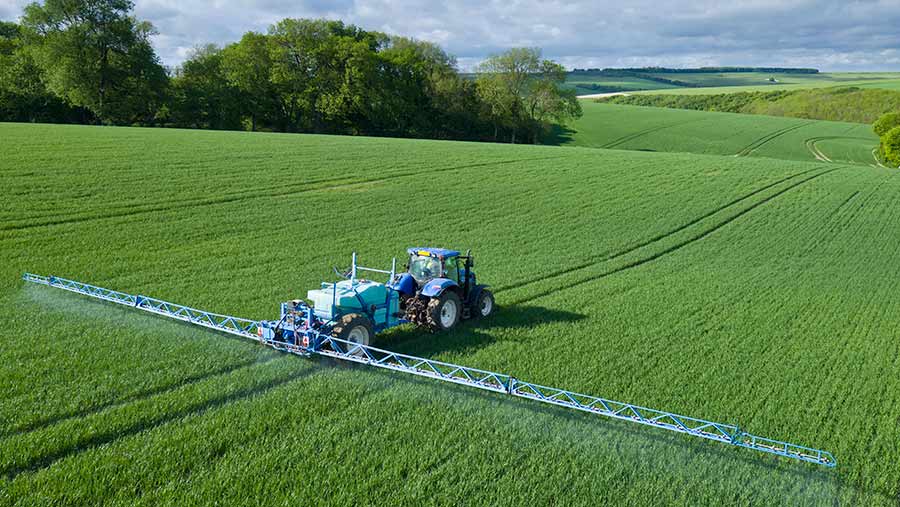 Using companion crops to tackle the phosphate problem in chalky soils and growing barley yellow dwarf virus-tolerant barley varieties in disease hotspots are some of novel solutions being trialled by agronomist Brett Pointing.

After graduating from Reading University in summer 2016, Mr Pointing is now managing more than 6,000ha of arable cropping stretching from Hampshire down to Devon, as part of the CCC Agronomy team.

Most are mixed farms, so he looks after maize and some grassland, as well as combinable crops.

See also: Job profile: What’s it like to work in crop nutrition?

His patch has its challenges; chalky soils with their well-known phosphate availability problems, a higher cost of growing wheat because of the greater disease pressure and barley yellow dwarf virus hotspot areas.

And like farmers in other areas of the UK, his clients are also thinking about life after Brexit, where environmental measures will play a greater role.

Rather than wait, Mr Pointing is actively looking for solutions and trialling new techniques such as companion cropping. Here are four areas where his clients are benefitting from his independent approach.

One example where Mr Pointing is trying new technology is with a barley yellow dwarf virus-tolerant variety of winter barley.

This could prove especially valuable now that neonicotinoid seed dressings for cereals are banned (from 19 December 2018), as some of his clients are in hotspots with sheltered fields harbouring aphids that carry the virus.

Last season, he trialled the tolerant variety Amistar on a farm near Blandford and compared it with a standard variety.

“It performed as well as Tower, but not as well as Orwell. This shows that even in a low-risk season, it is not far behind the best [two-rows] in terms of yield.

“Therefore, I believe it could have a role in BYDV-prone areas next year.”

A key attraction for Mr Pointing, who believes in an integrated approach to pest control, is that it could reduce the reliance on pyrethroid sprays. Pyrethroids are currently the only insecticides approved to control aphids in cereals.

He believes in promoting beneficial insects to tackle pest problems – for example, by providing grass field margins, as well as pollinator and wild bird food strips and only using insecticides where really needed.

This season, he is trialling the variety again at Blandford and on another farm near Lyme Regis.

For wheat, he sees delayed drilling – mid-October onwards – as the key tool to reduce virus risk, following this by perhaps one spray in early November.

“The chances are that we will have had frosts by then,” Mr Pointing says. By which time, aphid migration should have finished. 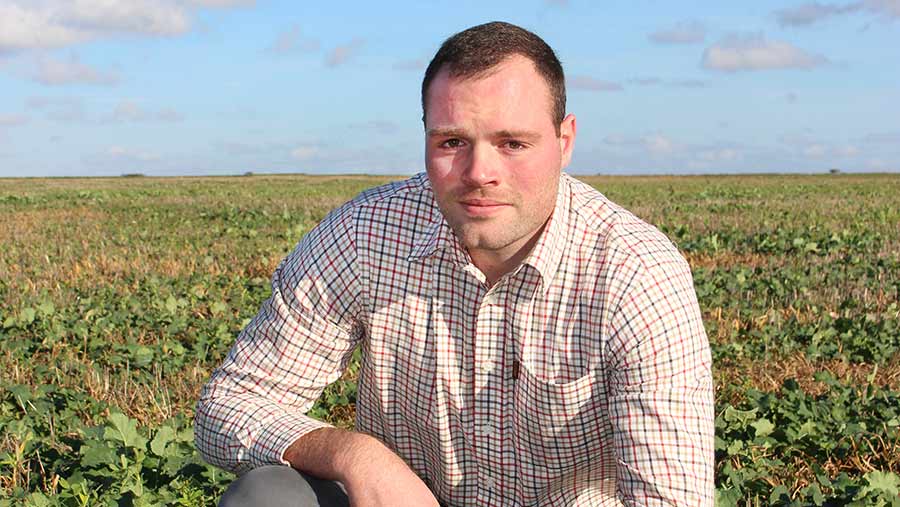 Another challenge is the higher wheat growing costs in the wetter West because of the higher pressure from wet weather diseases such as septoria.

Like many independent agronomists, Mr Pointing’s philosophy is to spend as little as possible while still achieving high yields.

“It is all about margins and not just yield,” he says.

At the start of the season, he will put together what he believes is the best fungicide programme. This is based on previous experience on the farm plus knowledge gained from AICC fungicide trials, Niab data and local variety trials. Colleagues are also a good source of information.

However, he believes some farmers in his area are spending more than they need to on crop protection for wheat.

“Even with the higher disease pressure here, by delaying drilling and opting for newer, more resistant varieties, I don’t see the need to spend more than £100/ha.”

For an October-drilled crop of Graham, for example, you should be spending about the £80-£90/ha.

His approach of delaying drilling and opting for more resistant varieties reduces the need for a T0 fungicide.

“With varieties like Graham, you don’t tend to see much yield response with a T0.”

Note: *Maximum of two applications in a season

Rates will vary depending on disease pressure due to earliness of drilling and how well timed the application is likely to be.

“The one exception is Crusoe wheat, as it may get early brown rust. Therefore, it will often receive a T0 and will need higher levels of SDHI and triazole.”

He is also prepared to adapt during a season. For example, last year the drought meant he could make savings without compromising yield, with his clients averaging 9-10t/ha. Some are touching more than12t/ha.

He points to one client who managed to spend just £160/ha on agchems which, including seed and fertiliser, came to £360/ha for a crop of KWS Zyatt wheat, which averaged about 9.5t/ha. “It delivered a really good margin.”

Another client managed to grow a crop of winter oats for £180/ha with all inputs, including seed and fertiliser, which achieved a yield of 8t/ha. 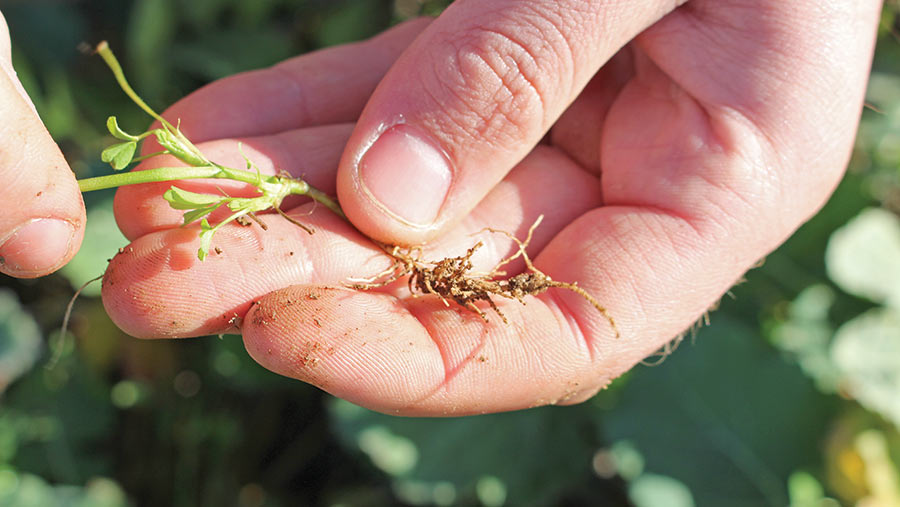 Mr Pointing is a firm believer in farm trials and one near Salisbury is testing the latest slow-release fertiliser technology for a farm that is subjected to strict water quality rules.

The farm has a Wessex Water borehole that supplies part of the city, which means minimising the risk of nitrates getting into water is a priority.

To drive crop yields without risking water, Mr Pointing is investigating a double-coated product, designed to reduce both volatilisation and leaching losses. It delivers a slow, steady release of nitrogen over a 10- to 12-week period.

“Yields were comparable and we are awaiting results from water samples taken by Wessex Water to see if it has worked.”

He has also introduced cover crops to the farm for the first time, with the aim of soaking up residual nitrogen in the autumn.

“This year’s crop of oats and radish looks fantastic, as there was quite a bit of N left this harvest. This would otherwise have been at risk of leaching.”

Another much talked about approach is companion cropping and Mr Pointing is investigating whether it could eliminate the need for autumn applications of di-ammonium phosphate (DAP) in oilseed rape.

The companion crop being tested consists of berseem clover to fix nitrogen plus buckwheat, which is a P scavenger.

“When it dies, it will release it [phosphate].

“It’s still early days, but the crop looks no different compared with the area that received DAP. If the results are OK, the plan is to do the whole area next year.”

He also believes companion crops could have a role in tackling the phosphate problem in chalk soils.

The high levels of calcium lock up phosphate and is bound tightly, so phosphate is only available for a short time after the fertiliser has been applied.

“Deficiency can be evident in P-hungry crops like oilseed rape and that is why you can often see poorer patches on the chalky banks.”

Further investigations often shows a P index of 2 across the field, while the bad parts test show up as index 0, indicating a lack of available P.

Looking at solutions, manures can be valuable as they release phosphate over a longer time, he says.

“That’s why a lot of sewage sludge is used on chalk soils, but there are areas where it can’t be used, such as near boreholes.”

And it is also proving more difficult to source as demand grows.

“But with a companion crop, plants will die off and then release the captured phosphate that is then available for the following crop.”

CCC Agronomy is a co-op set up by farmers in 1985, which employs its own agronomists.

The company is a member of the Crop Advisors Independent Alliance, a buying group that works closely with independent agronomists and their farmer clients.

Mr Pointing joined CCC Agronomy in 2016 after graduating from the University of Reading with a degree in agriculture.

He has been working alongside Joss Woods since joining CCC, as part of a succession plan. Mr Pointing has even added his own clients and is now looking after 39 farms, covering some 6,000ha.

As part of his training, Mr Pointing joined the Association of Independent Crop Consultants Academy, which consisted of 12 modules in a year covering topics such as soil science and rotations. He completed his Basis qualification at the same time.