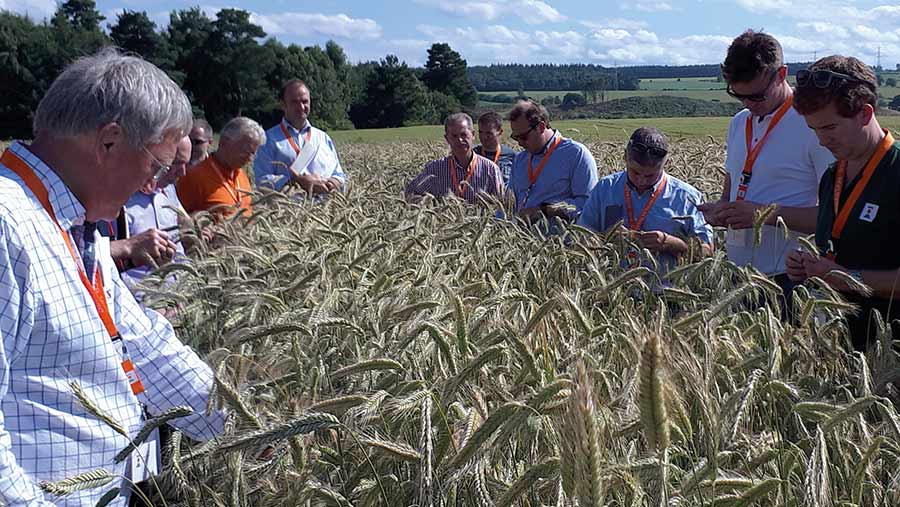 Hybrid grain rye is being grown for the first time by farming group Sentry in south Norfolk as a low-input crop on light land as it may be able to cope better with climate change than other cereals.

The crop is grown on contract for use in pig feed at a price discount to feed wheat and suits some of the group’s lighter land, and it is hoped it will achieve higher yields than wheat as it is a good scavenger for moisture.

“We are looking to grow different crops which are suited to light land and give the best returns, and hybrid rye looks very good,” he says.

See also: Why one Scottish light land estate has opted to grow rye

The hybrid rye is being grown on a belt of light land on one of the group’s farms in south Norfolk where cereal yields vary enormously depending on the season, and where the wheat yield averaged only a low 4.5t/ha last season.

This season, the farm is growing 60ha of the crop on a contract for grain trading and processing group ADM with a targeted yield of 7.5t/ha, with much reduced inputs of fertiliser and fungicide compared with wheat, and could be ideally suited as a second cereal.

The grain rye price is set at a £20/t discount to feed wheat, or at about feed barley levels, and it is seen as an attractive option considering the low growing costs.

Mr Barrett is impressed by the crop’s ability to cope with drought and also its very competitive nature to crowd out weeds, while harvest should fit in well – just before winter wheat

“It seems to be a fairly drought tolerant crop and in the last two years we have had hot and dry springs,” he says. 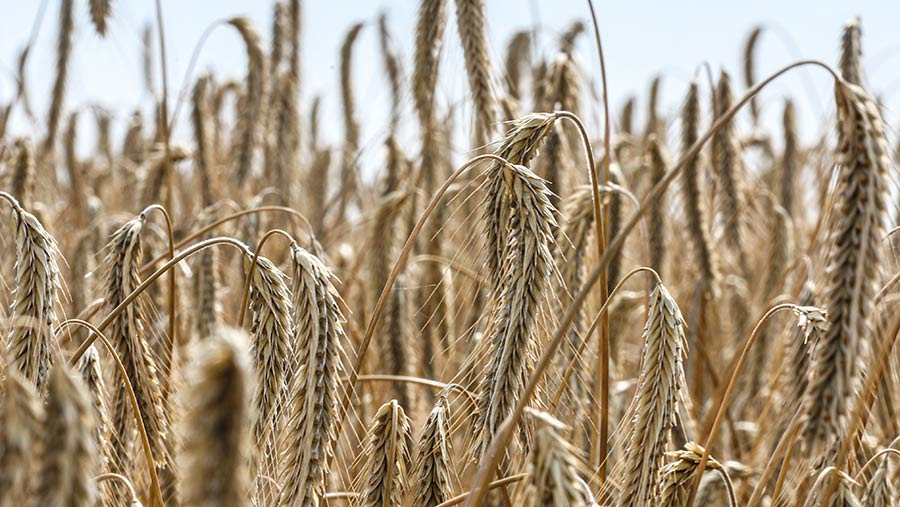 Being a low-cost crop, rye helps to reduce financial risk, which is important both to his group and its land-owning clients, he adds.

Mr Barrett manages the group’s farms from Kent up to Norfolk and is based at Hill House Farm, Hedenham, just north of Bungay, where the hybrid grain rye is being grown.

The group farms 20,000ha, mainly across south and eastern England, and grows 800ha of rye which is largely for anaerobic digestion (AD) plants apart from the 60ha grain rye crop. The south Norfolk farm has grown rye in the past, but that was conventional whole crop rye for a local AD plant back in 2015.

The plan was to drill the hybrid rye in late September, but rain intervened and the crop was eventually sown in late October. The variety Serafino was selected and the seed rate increased because of the late sowing to 225seeds/sq m from a more normal 200seeds/sq m. The cost of the hybrid seed was significant at £110/ha, or about twice that of wheat.

Growth ahead of wheat

The crop emerged well with a good plant stand and was very competitive with weeds so herbicide costs were only £37/ha, and it developed ahead of wheat with its ears emerging in mid-May.

Fungicide costs are lower than wheat with a relatively inexpensive azole/strobilurin mix used at T1 and T2 with a focus on brown rust which can be troublesome for the crop, compared with a normal four-spray policy on early-drilled winter wheat on the farm.

Nitrogen rates were cut back to 130kg/ha compared with 200kg/ha for the farm’s light land winter wheat while in such a dry season plant growth regulator costs will be similar to wheat. 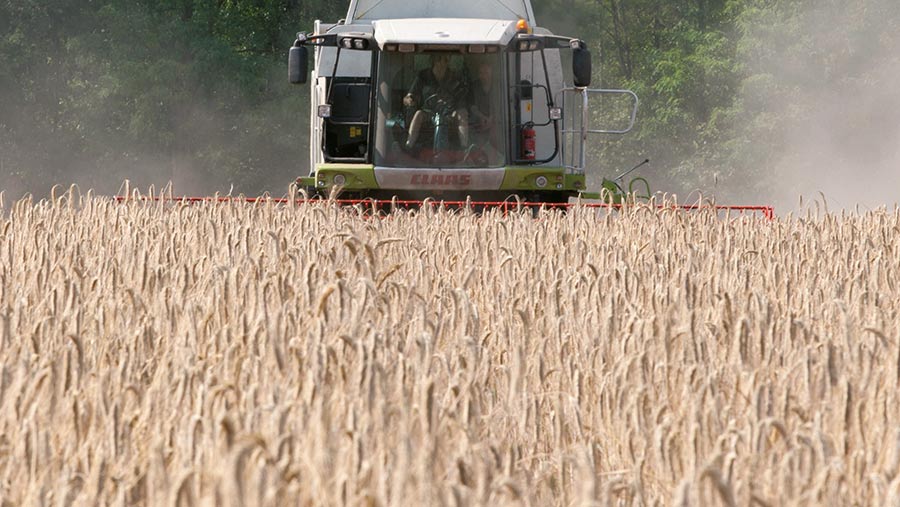 A key benefit is that harvest comes in late July/early August which often coincides with good weather in the area, and it will also dovetail between cutting oilseed rape and harvesting winter wheat, with all the straw baled and sold locally.

“In recent years, the weather from late July through until early August has been a sweet spot for harvesting, so it fits in well with that timing,” says Mr Barrett.

Next season, he is likely to try the hybrid rye as a second cereal on heavier land as he is confident it will give a better margin than other second cereals.

“With changes in climate becoming more evident and periods of drought more frequent we will need to adapt our management approach by growing crops that are more resilient to such conditions, which will favour hybrid rye,” he says. 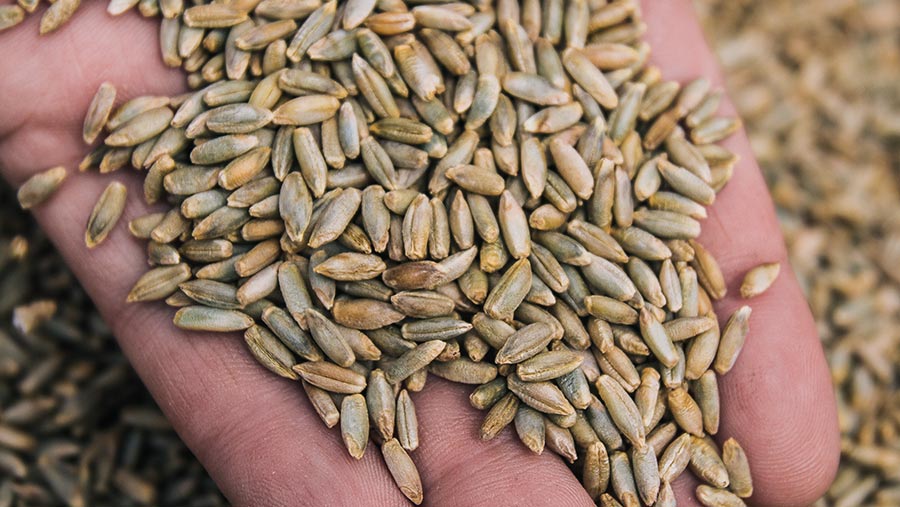 Hybrid rye needs a third less water than wheat and will thrive in conditions or on soils where wheat and even barley may struggle, says John Burgess, hybrid rye product manager for KWS, who bred the variety Serafino.

For these reasons, it could be a crop for the future as it fits in with current farming policy towards more sustainable agriculture with fewer inputs such as nitrogen fertiliser.

“Rye also has ultra-low take-all carryover and is aggressive in reducing blackgrass populations, making it an ideal second cereal,” he says.

With many arable growers looking for cropping options, it has many potential markets from animal feed and food manufacturing to use in the malting and distilling industries.

Although the cost of seed can be high, Mr Burgess argues that there is a ready market for rye straw, so that a crop which produces 4t/ha of straw at £50/t would cover the cost of seed twice over.

There is a major potential market to use rye in compound pig feed as it is a cheaper alternative to wheat and provides a range of key benefits.

“In Denmark, Germany, Russia, Poland, and Spain, it is already an established component in rations and now an increasing number of producers in the UK are recognising the advantages of providing rye-rich feed, including improved gut health and behaviour,” he says.

They suggest that as hybrid rye is deep rooting and a good scavenger of nitrogen from previous wheat crops, then growers should apply about 120kg/ha of nitrogen, allowing them to cut their nitrogen use and carbon footprint.