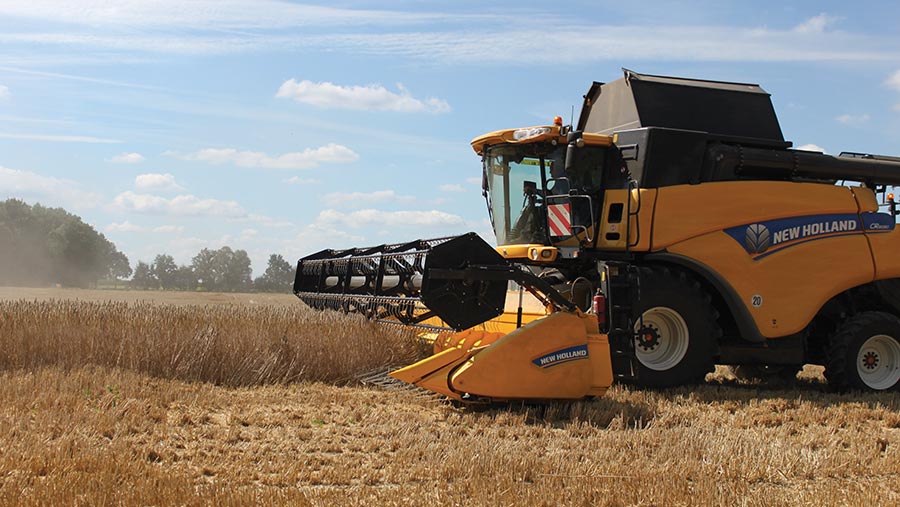 Hybrid rye is replacing wheat and barley on one light land Perthshire estate as it has a higher yield and lower inputs, while satisfying a growing thirst for rye whisky.

The crop’s yield is also more predictable than conventional cereals, has a lower carbon footprint and gives extra straw to cover the estate’s carrot crop through the winter.

The use of less nitrogen fertiliser and fewer, cheaper, fungicides more than offsets more expensive hybrid seed, and the rye grain is sold to a maltsters at a similar price to feed wheat.

Colin Mitchell, farm manager at the Meikleour Estate, turned to rye four years ago in an effort to produce higher, more reliable, returns than conventional cereals on the farm’s light sandy gravel soils. 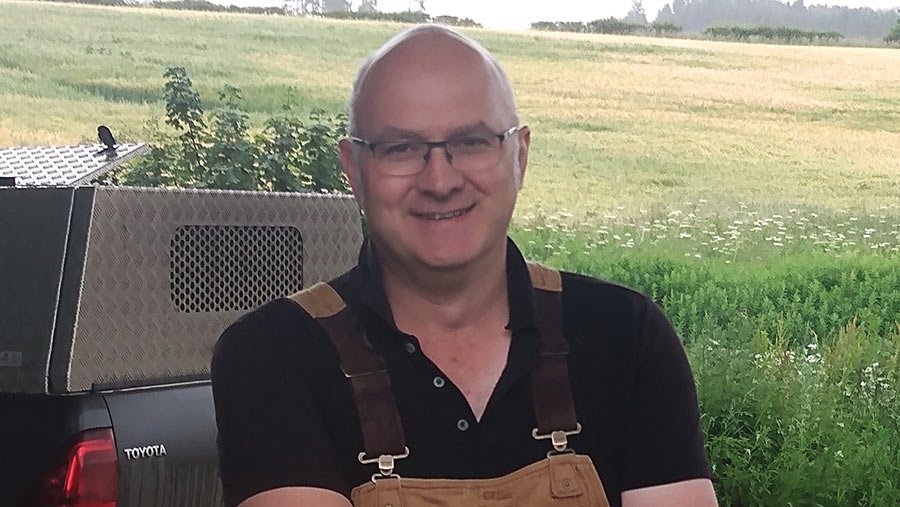 “On our light land, the rye outyields wheat and barley and is cheaper to grow, so it’s good news for us,” he tells Farmers Weekly.

The estate, 12 miles north of Perth, is currently growing 65ha of the autumn-sown crop, replacing spring and winter barleys and even winter wheat, and the rye area may increase to 200ha over the next few years.

Last summer’s rye crop yielded 10.14t/ha at a specific weight of 76kg/hl, with grain moisture under 15%, and was snapped up by a local maltster for rye whisky distilling.

Rye average yields over Mr Mitchell’s four years of growing the crop have been 8.38t/ha compared with wheat’s 10-year average at 8t/ha, and its yield consistency has been better than wheat.

In addition, spraying cost savings were nearly £100/ha, despite spending a fraction more on plant growth regulators (PGRs) for the tall-strawed rye, while the crop tends to be slightly earlier to harvest than wheat.

“Our spend on chemicals for the rye was £145/ha last season compared with £240/ha on the wheat, and it received 50kg/ha less nitrogen,” he says.

Nitrogen fertiliser rates for rye are down near 150kg/ha, whereas wheat receives 190-200kg/ha, with both crops getting 60kg/ha of sulphur.

Rye’s success has largely been at the expense of winter feed barley which has average yields of 7.5t/ha, while Mr Mitchell has given up with spring malting barley because of lower yields and focuses on feed barley, which yield 5.5t/ha.

The estate grew its first crop of rye for the 2016 harvest after trials data from Scottish Agronomy suggested that it might be a better proposition than winter wheat on its light soils.

Some 12ha of winter rye was drilled on some very dry gravelly land where the best-ever yield had been 6.5t/ha from winter oats, and the rye came in at 7.7t/ha and was sold for anaerobic digestion.

That success persuaded Mr Mitchell to increase the area the following season to 25ha and all that went for human consumption, so the area rose again over the following years.

“I ramped up production slowly to 100ha for the 2019 harvest and the crop averaged 10t/ha, which was unheard of over such a large area,” he says.

For this season, the hybrid rye area is down at 65ha for rotational reasons, and the KWS variety Edmondo is being grown, after Magnifico and Daniello, from the same breeder, were grown previously.

The rye crop followed wheat and oats and was drilled 25mm deep at 250 seeds/sq m using a 6m Lemken power harrow-drill combination after ploughing to 200mm.

The crop emerged quickly with no seedbed fertiliser applied and a pre-emergence flufenacet-diflufenican herbicide spray used for grassweed and broadleaved control, along with manganese sulphate.

Drilling was completed on 3 October, about 10 days later than normal due to adverse weather, but the crop came through the winter looking well, and grew vigorously in the spring.

The rye crop is harvested in the first half of August, usually ahead of winter wheat in the second half of the month. The extra volume of straw reduces the forward speed of the estate’s 9.1m header New Holland 9070 combine by about one-third. 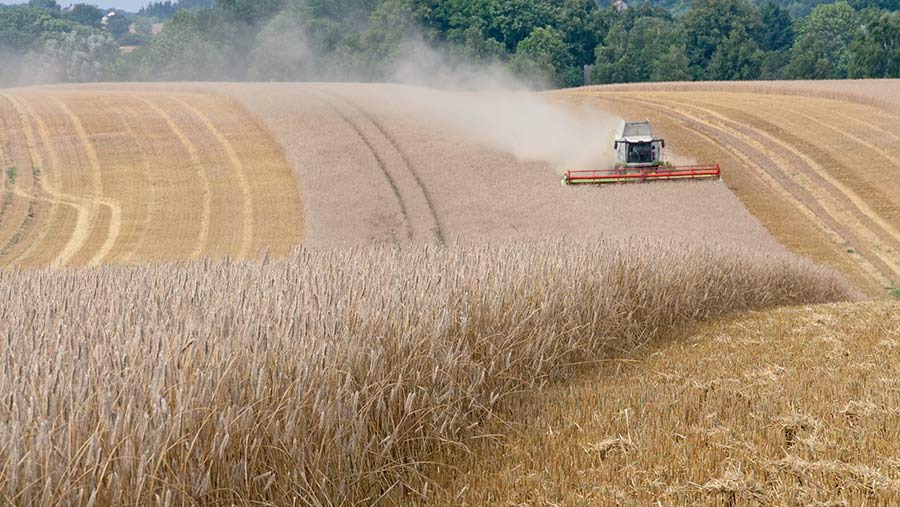 “We can usually cut 30ha of wheat a day, but it is down to 20ha of rye, although being a denser grain the rye is easier to separate out,” says Mr Mitchell.

The straw yield of hybrid rye is 50-100% better than other winter cereals, and last season the estate averaged 12 bales/ha from its Hesston baler compared with seven from winter wheat, which at £25 per bale, means that the rye is worth an additional £125/ha.

“Root crops are our main cash generator, so it is important to conserve straw from cereals to cover carrots over winter to protect them from the cold,” he says.

The carrots are covered in straw during October and November at a rate of 50t/ha, equivalent to 100 of the 500kg Hesston bales.

“The other benefit that we have found is that rye straw does not break down as quickly as winter wheat or winter barley, so we might be able to reduce the application rate going forward, although protecting the crop remains our prime consideration,” adds Mr Mitchell.

“The soil moisture deficit reached in late summer is forecast to become more intense, so farmers on free draining, acidic, sandy soils with moderate fertility will be more exposed to its effects on yield and rotational income in the future,” he says.

A dual-purpose hybrid variety, like Edmundo, can be used for AD or to produce grain for the feed, flour, and distilling markets, he adds. Typical grain quality measures are a Hagberg of 150-240 and protein of 8% – 11%.

Rye has low take-all carryover and is aggressive in reducing blackgrass, making it good as a second cereal, says Mr Burgess. The group’s recommendation is to drill the crop at 175-200/sq m in September, and 250/sq m in October.

There is increased interest in rye grain from whisky distillers, millers and animal feed compounders, as well as AD plants.

Whisky made using from Scottish rye is seen as an opportunity by InchDairnie Distillery in Fife, which is keen to develop the distillery’s rye whisky brand Ryelaw as the market is growing.

“Whisky made using a large proportion of rye from Scotland is a niche opportunity we are very keen to develop,” explains distillery managing director Ian Palmer.

Rye is used in the famous crispbread, but there is increased interest in rye’s health benefits in a range of rye-based foods. These include bakery products such as sourdoughs and rye-based bread, together with breakfast cereals and snack products.

Rye could be used in pig nutrition with inclusion levels of up to 70%, possibly in pelleted, liquid or meal-based feed for pig fattening. Trials have shown not just cost benefits, but also positive behavioural and gut health effects.

Read more about rye in next week’s (21 August) Farmers Weekly, where we look at why farmers should consider growing the crop instead of second wheat for use as a valuable pig feed.