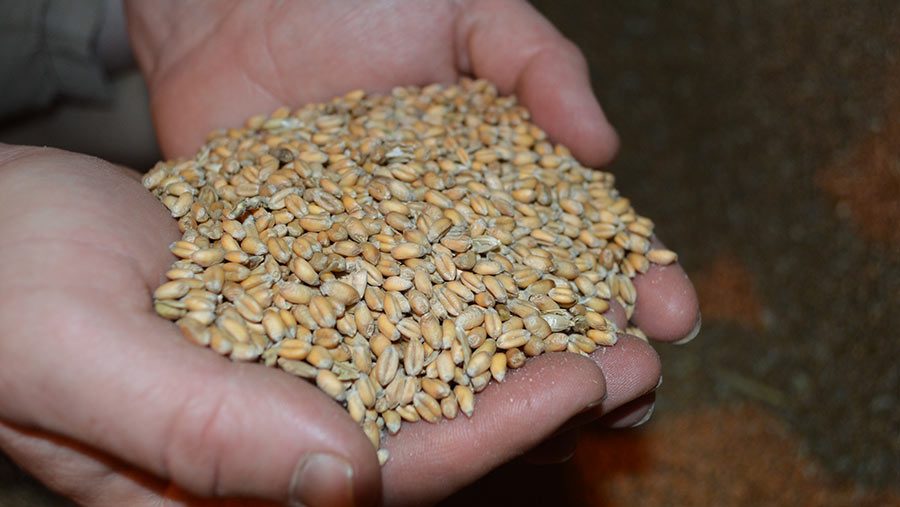 Kent grower Alan Clifton-Holt is switching varieties to raise the harvested yields of his biscuit-making wheats – and foresees a good demand for his grain even in Brexit future.

He is growing all biscuit wheats from his base on Romney Marsh as he earns a good price premium and says they are cheaper to grow than nitrogen-hungry breadmaking varieties.

With strong domestic demand and a host of export ports, he is looking to maximise production of his 500ha of quality winter wheat where he budgets for a high yield of 12t/ha.

His recently cut harvest was largely of the varieties Basset and Elicit, but a small plot of newcomer Firefly has done well despite concern over the variety’s resistance to brown rust.

“Firefly is a step up in yield compared with Basset and Elicit, and stands up better at harvest time,” he told Farmers Weekly.

See also: Which bread- and biscuit-making wheat varieties to grow

In an on-farm trial harvested this summer, one 20ha field was split equally between Firefly and Basset and after they had similar treatments, the Firefly yielded 1.5t/ha higher at 13.5t/ha.

So this autumn, Firefly and Basset will be his main varieties, with 40% of each, while Elicit will fall to 20% as its open ear nature means it has a tendency to shed grain on the farm near to harvest time.

Mr Clifton-Holt is largely committed to biscuit wheats as they earn a £5-15/t premium over feed wheat and are less costly in term of nitrogen fertiliser, high yielding and less demanding in terms of specifications than breadmaking wheats.

His group 3 biscuit wheats see good demand in northern European countries such as the Netherlands, Belgium and Germany, but he is confident there are other markets available if Brexit means that tariffs are imposed on exports to the EU.

“In the event of Brexit, Europe does not dictate wheat prices. It is domestic demand and the world price, and so there will always be somewhere we can sell,” he said.

Domestic biscuit makers use about 1m tonnes of wheat annually, while there is good export demand outside Europe such as in North Africa, and in Kent the farm is blessed with good grain export ports at Dover, Rye and on the Isle of Sheppey as well as Tilbury in Essex.

Typically, biscuit makers look for wheat with 10.7% protein, 180 Hagberg and 72kg/hl specific weight, compared with a breadmaking standard of 13-250-76, meaning it is easier to hit specifications, especially on protein contents. 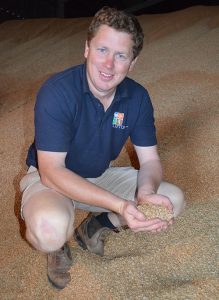 The family-run operation at Haguelands Farm, Burwash, southeast of Ashford, is based on rich silty Romney Marsh soils, although the 1,450ha it farms stretches from Rye up as far as Canterbury.

The main disease threat in this part of Kent is brown rust, and although Firefly is the top-rated biscuit wheat, at 8 on the AHDB recommended list (where 1 is very poor and 9 is very good), there have been signs that this rating could come down after disease was seen in the variety this season.

Mr Clifton-Holt has examined many trials in the area of fungicide-treated and untreated Firefly and has seen the effects of brown rust in untreated plots, but he is confident his fungicide programme with a focus on late T3 head sprays will be adequate.

“If you miss out a T3 spray then brown rust will be a real problem in our area,” he said.

His programme, agreed with his agronomist, starts with a robust T0 spray, while rates of T1 and T2 spray can be reduced if needed, and then the T3 treatment is very important for brown rust.

“We have seen odd bits of brown rust, and although there were worries around mid-June we have seen no yield penalty,” he added.