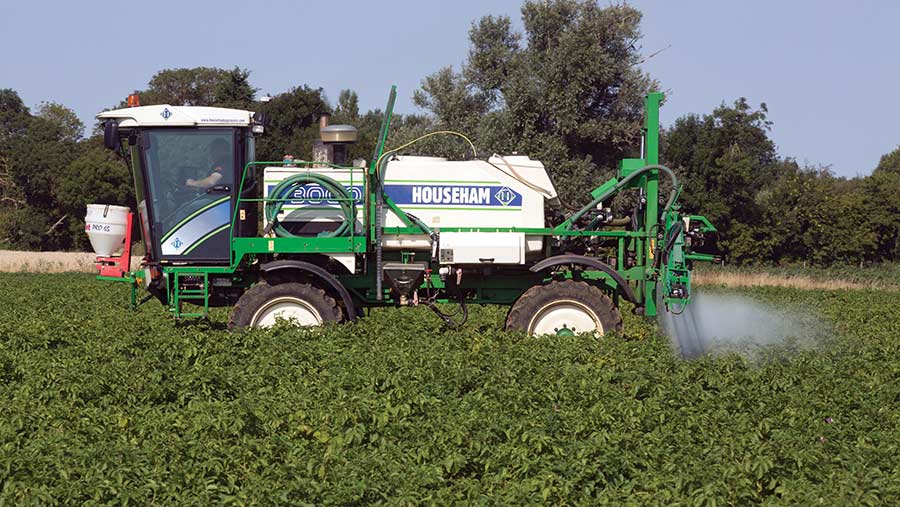 Good application is essential in getting the most from maleic hydrazide, which AHDB trials have shown to be a useful, cost-effective tool for controlling early dormancy break in potatoes.

This helps delay or reduce the need for more expensive and volatile alternative in-store treatments, such as spearmint oil and ethylene, and rein in overall storage costs.

Additional benefits of using maleic hydrazide include a reduction in secondary growth and chain tuberisation, and it also minimises internal sprouting.

Manufacturer data also shows that it can control 70-90% of volunteers post-harvest, which helps in an integrated control strategy against soil-borne diseases, late blight, virus and potato cyst nematode (PCN).

However, some variable sprout control results have been seen in trials and commercial crops, and it is thought this variability is very often down to poor application timing and/or conditions at spraying.

We asked experts from the two maleic hydrazide suppliers UPL and Certis for some advice on getting the process right.

1. Apply three to five weeks prior to haulm destruction

Maleic hydrazide is a plant growth regulator (PGR) that is absorbed by the foliage and translocated to the tubers, where it inhibits sprouting.

Because of its PGR effect, if it is applied too early when tuber cell division is still taking place, there can be a yield penalty – a rule of thumb is that 80% of marketable tubers should be greater than 25mm in size.

However, as it needs to be applied to a fully functioning plant for efficient uptake, applying too late once the crop starts to senesce can see poor efficacy.

To balance these two factors, it is vital that the product is applied between three and five weeks before the planned haulm destruction date.

Ideally, growers should lean towards the earlier part of this window, with the optimum being five weeks.

Within the application window, ensuring the correct environmental and crop conditions is important in maximising maleic hydrazide uptake.

Growers should plan to be ready to apply six weeks from haulm destruction and monitor the crop and weather for optimum conditions.

As soon as the correct parameters arrive, it should be applied – even if that means waiting until later in the window.

Maleic hydrazide is a large molecule and needs time to be absorbed by the plant’s leaves. Therefore, hot and dry conditions where the spray solution dries very quickly – or rain showers that can dilute it – must be avoided.

Relative humidity is also an important factor – it should be above 75% and unlikely to fall for a few hours after spraying.

This means evening applications, ahead of the dew point, may be preferable during periods of hot and dry weather. Plant stomata ideally need to be open for uptake, which occurs in daylight, so avoid spraying after dark.

As crops need to be healthy and fully functioning, applying to a senescing crop will give poor results.

Similarly, stress from drought, heat or foliar diseases will also inhibit uptake and every effort should be made to keep to the crop healthy.

Some variability in maleic hydrazide performance on farm has been attributed to growers using lower water rates more suitable for late blight fungicide products, but this limits spray deposition and sees the spray solution dry faster on leaves.

As a result, high water rates should be used for maleic hydrazide products to maximise coverage and slow the drying time as much as possible.

There is a slight difference in label recommendations for water rates between Fazor and Crown MH, which state 350-500 litres/ha and 300-600 litres/ha, respectively.

However, both companies agree that the higher the better, particularly in warmer and drier conditions.

4. Use as a standalone product

With blight fungicide programmes still in full swing when maleic hydrazide is applied, there is a temptation to tank mix to cut the need for an additional sprayer pass.

Growers can also be offered, or seek out, adjuvant products that claim to improve performance of either Fazor or Crown MH, particularly in marginal conditions.

However, both UPL and Certis strongly advise their products are applied alone.

This is because some blight products contain adjuvants that help the product spread and stick to the leaf and then dry rapidly and these can limit the uptake of maleic hydrazide.

Furthermore, manufacturer work with both products has shown no benefit from adding in standalone adjuvants. Therefore, growers are urged to wait for the correct environmental and crop conditions to maximise efficacy, rather than seeking a shortcut.

There are two formulations on the market These include UPL’s Fazor, which has been established over many years, and the more recent Crown MH, marketed in the UK by Certis.

There is no reported advantage in efficacy from either option, with the only major differences being formulation, application rates and pack offerings (see table below).

With Fazor, users will need to handle and introduce 5kg bags into the sprayer, with one pack covering one hectare.

Crown MH gives growers the opportunity to choose from three pack sizes, including 20-litre cans and returnable intermediate bulk containers (IBCs) and is applied at a higher volume of 11.1 litres/ha.

The IBC options can ease spraying logistics, with product sucked directly into the sprayer. It can also cut packaging waste that will require disposal at a later date.

In addition to sprout suppression, maleic hydrazide can reduce secondary growth, which occurs after a crop has been under stress and that stress is released.

For example, if an unirrigated crop is suffering from drought and rain arrives, it can quickly put all its energy into haulm production instead of tuber bulking. This reduces yield and dry matter content.

Secondary growth can also be seen below ground in the form of chain tuberisation or sprouting in the ridge.

Maleic hydrazide should be applied 2-3 days after a stress period is finished for the best results at halting secondary growth.

The need for secondary growth control with maleic hydrazide can sometimes occur earlier than the recommended window if purely looking for sprout suppression and volunteer control.

As tubers may not have reached the optimum size, there could be a yield penalty, but a balanced judgement should be made as to whether losses will be worse from potential secondary growth or the earlier application.

Most of the information used in this guide was provided by Nick Badger, potato product manager at Certis UK and Don Prendergast, UPL’s head of technical services for UK & Ireland.