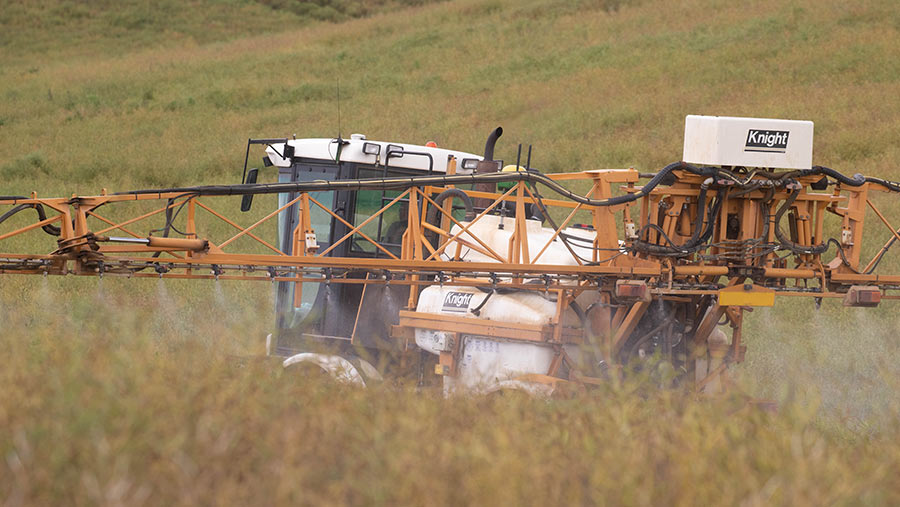 With harvest approaching, thoughts turn to pre-harvest glyphosate applications and whether they are needed in winter barley, although most oilseed rape crops will be sprayed.

Glyphosate is also a good opportunity to clean up weeds.

In sugar beet, warm temperatures and high humidity provide ideal conditions for cercospora, so grower are being advised to make sure beet crops are as healthy as possible and consider their fungicide options.

We are closing this season’s gates with fewer crop worries than for a while – even on our lighter soils.

So far too, solar radiation levels have been good and we’ve been spared damaging periods of heat stress.

Having had no blossom midge – orange or lemon – worth treating, our winter wheats are well set and with plenty of green leaf.

Late rusts are our only real concern. But we’ve given the crops every chance by keeping well ahead of infections all season.

Most of our spring barleys are looking much better after a decent drink, with late tillers shaping up to be more friend than foe.

After their recent growth surge, we’re heartily glad we didn’t hold back on late plant growth regulators – nor on ramularia control, given how much there is in untreated trials.

Some headland pod midge damage underlines the high levels of seed weevil we saw in the OSR earlier.

This, hopefully, won’t be too damaging to yield though, with such promising canopies and good pod fill supported by sufficient soil moisture.

Looking ahead as we wait on the harvest with high hopes, we are making a series of firm new season resolutions.

First and foremost, having seen more blackgrass seed return than for a year or two in some areas, we will not compromise on grassweed management.

And we won’t be lulled into a false sense of security by low-level infestations on traditionally problematic ground either.

Luximo (cinmethylin) will give us a useful extra weapon. But it’s not the same advance as Atlantis (iodosulfuron + mesosulfuron) was in its time, and it didn’t take long for that to be broken down.

So we will remain very wary of drilling wheats too early, as well as slackening off on any other of our tried and trusted cultural controls.

We’ll also be paying particular attention to bromes wherever tillage is minimal, making sure we know which species we’ve got.

That way we will avoid dormancy disasters by leaving the seed that needs it to surface ripen for up to four weeks before any cultivation or catch crop sowing.

As well as giving us the clearest possible guidance on upcoming weed control needs, we are using our summer crop inspections to pinpoint any areas of soil damage to tackle with the low disturbance sub-soiling we’ve found so effective without damaging soil organic matters or earthworm populations.

Setting up our ground for spring cropping early enough in the autumn when it’s in the best possible condition will be another priority.

As will getting the right cover crops established at the right time and in the right way for both the following crop and the season.

It may add to the cost, but companion cropping, seed-bed fertiliser and vigorous hybrids will be our OSR establishment priorities, as cabbage stem flea beetle certainly hasn’t gone away.

We’ll only be sowing crops when and if we have enough moisture too, and in ways that preserve as much of it as possible.

Above all, with such climatic uncertainty, flexibility will be our watchword in everything.

Harvest is just around the corner. Grain stores are being cleaned down ready for the new crop.  Winter barley is turning fast and combining for crimping is now under way.

Corvids and pigeons are now pitching into crops with a vengeance. Several areas have been beaten flat as they use their wings to push the crop down.

If home-saved seed is planned, take time to designate suitable weed-free and even areas.

Straw is a valuable commodity in the South West, although this year high phosphorus and potassium prices and plenty of straw in the crops means a lot more acres than usual will be chopped.

Don’t forget the hidden costs of selling straw, such as soil damage from straw-clearing machinery.

Winter wheat is still green in the top three leaf layers, although septoria is present on lower leaf layers. Stem bases are generally healthy, with any whiteheads largely caused by mechanical damage.

Any fungicide misses are now obvious. The current showery weather poses a real challenge to fungicide programmes, and we expect useful results from our trials.

Where desiccation is required in the oilseed rape crop, action will start later this week. Not all crops will be desiccated, attention will focus on uneven, weedy areas. Premature treatment will reduce seed and oil yield.

Peas and beans are entering pod fill. So far there is little sign of bean rust or chocolate spot. Downy mildew remains the easiest disease to find but not at high levels.

Black bean aphid is present, but not at threshold levels. Bruchid beetle activity has not been detected. No insecticides whatsoever have been applied to bean crops this season.

Linseed is in full flower, with fungicide sprays of tebuconazole now being applied.

After a slow start maize is now growing rapidly. Of concern is the fact that previously effective blackgrass herbicides are not performing, further testimony to the growing spread of resistance.

It looks as though we might see an early harvest this year in Cumbria, with winter barley about one to two weeks away from crimping. Crops are generally looking very well, which will be a relief to growers, especially with the high grain prices.

Spring barley is quickly moving through the growth stages.

Growers should be aware of high ramularia pressure and can distinguish ramularia lesions from abiotic spotting by identifying the five Rs – ringed with the yellow mark of chlorosis, rectangular shape, restricted by the leaf veins, reddish brown and right through the leaf.

It is advisable to check crops for ramularia pressure and consider ramularia protection within your fungicide programme.

Maize is looking very strong, and the warmer temperatures mean it is growing fast.

All weed control is now complete, with post-emergence sprays being applied within the past month, primarily for redshank and bindweed.

Currently maize growers are considering the final nitrogen applications. Slow-release nitrogen fertiliser is useful in this situation as the maize crop requires the majority of the nitrogen towards the very end of its life cycle.

Some maize growers are also currently undersowing the maize with grass seed, such as Italian ryegrass or westerwolds, either with a specialised drill or broadcasting to prevent winter soil erosion, soil damage during harvest and to provide some winter forage.

When choosing a winter forage mixture, consider including a mixture of different plant species – for example brassicas such as forage rape, tillage radish and legumes or vetch and crimson clover, alongside cereals.

The mixture of species allows for diverse rooting systems, which break up compaction and improve soil health.

The sun has been shining here in the East and with it comes a sigh of relief as we head towards the end of the silly season and venture off the farm to various open days and trials.

Crops appear to be changing colour overnight with this warm weather. Winter barley ears are starting to bend over and grains are firming up, with the next decision being whether we allow the weather to finish the job or use some pre-harvest glyphosate.

I would certainly recommend it for green tramlines and shaded headlands. Just remember that glyphosate is only to be used when the grain can hold a thumbnail indentation, indicating a moisture content of 30% or less, and shouldn’t be applied to any crops going for seed production.

With oilseed rape worth a small fortune this year, some farmers have decided to use a pod sealant for added insurance.

This would have probably have been applied by the time this article appears, providing the crops pods are bendy, which leaves us to start looking at desiccation on early drilled crops.

As with barley, most OSR crops will be sprayed off in line with the Roundup (glyphosate) guidelines, looking at the crop as a whole rather than just the main raceme. In general, desiccation should take place when two-thirds of the seeds in three-quarters of the pods from the centre of the stem have turned brown. 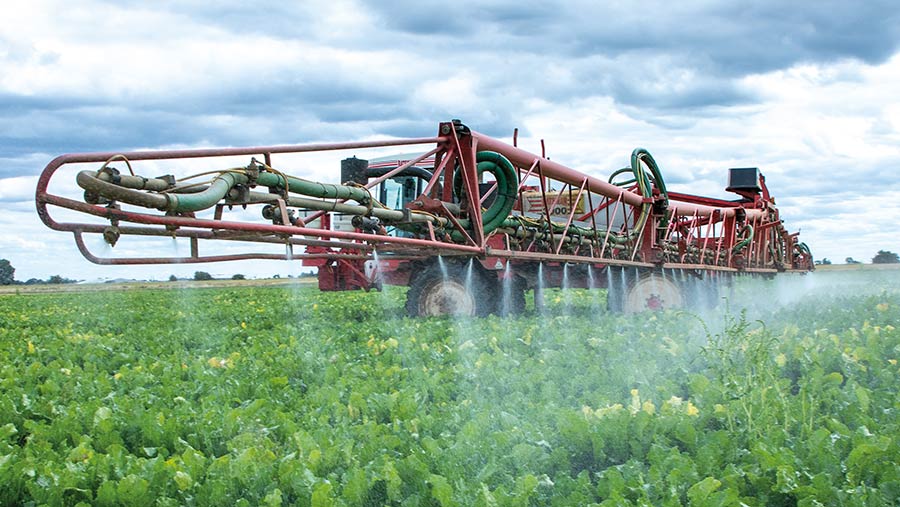 Glyphosate can also help to kill any tricky perennial weeds that have been left behind in the spring, although spraying off is not essential in hot and dry weather.

Other than on a few backward crops, sugar beet herbicide applications have ended, which means we can shift our concentration to nutrition.

Although there have been no reports of cercospora as yet, warm temperatures and high humidity provide ideal conditions so it is important to make sure beet crops are as healthy as possible and not lacking any vital nutrients they require.

Three of the most important nutrients to consider are boron, magnesium and manganese; ensuring there is no deficiency will help to fight the onset of disease.

Fungicide programmes for beet are going to rely heavily on two key actives this season, difenconazole and azoxystrobin, with the addition of copper to improve protection against cercospora.

However, there is a small glimmer of hope that there might be some new chemistry authorised to be used later in the year – let’s keep our fingers crossed!