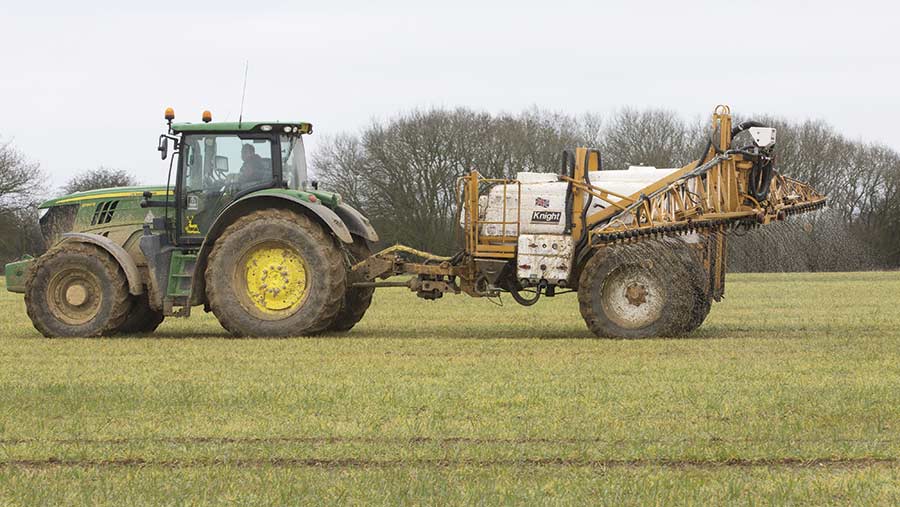 Another cold, wet spell is fuelling concerns over the mounting workload on many farms, with thoughts of spring drilling as distant as ever.

One benefit of the recent cold snap is that it has helped dampen down the rust threat in wheat crops.

However, our agronomists warn that the septoria risk is still there and could prove difficult to manage once temperatures rise, given the ideal wet conditions.

At the time of writing, we have just received another 50mm of rain, to further saturate the already waterlogged fields. This comes after the snow and the short, but rapid deep-freeze conditions.

Many top dressing applications are now behind schedule and a lot of  crops are beginning to look like they are desperate for nitrogen.

See also: How one farmer is helping his crops cope with stress

In a recent article in Farmers Weekly the need for a T0 application was being challenged, due to the recent freezing weather.

This notion may well be true if considering rusts, but as the primary disease of wheat is septoria, I find this discussion a little academic at best and at worst, possibly irresponsible.

As far as I am aware, cold weather does not control septoria, but only slows the rate at which it cycles within the crop. Most wheat crops are already showing clearly visible Septoria tritici symptoms and the recent very wet weather will only be making this situation worse.

It looks as if a T0 spray in this region will be imperative, rather than an application that might be avoided.

Residual herbicides have in general worked exceptionally well this winter. At present cleavers is the only weed that has come through the residuals, but in a few of the earlier-drilled fields, we are now beginning to see the emergence of spring-germinating weeds.

Wild oats have been very slow to show this season, with many known problem fields yet to show any emergence at all. Dormancy has probably not been broken due to the excessively wet soils.

Oilseed rape crops are variable, but many are entering the spring period as patchy crops, which is going to present some difficult management decisions.

For example, what level of nitrogen and fungicide inputs are needed to get the best out of the crop, without overspending on a crop with limited yield potential, as large parts of the field are empty?

Poor weather during the past month has severely limited progress with any fieldwork. Crops on heavier land or those with poor drainage are suffering the most, with stress symptoms ranging from yellow to purple.

Later-sown wheats are looking the most stressed and most growers have been unable to apply any nitrogen fertiliser. As soon as land dries up there is a huge workload to tackle, including applying fertiliser and organic manures, spraying and drilling.

The earliest crops of winter wheat are approaching growth stage 30 and will soon be ready for a plant growth regulator application.

However, it has been too wet and cold for grassweed contact herbicides such as Atlantis (iodosulfuron + mesosulfuron) and Broadway Star (florasulam + pyroxsulam) to be applied yet. There could be some interesting mixes ahead if conditions do not soon improve.

The pressure for a T0 fungicide on yellow rust-susceptible varieties has been eased, with the recent cold weather severely checking what were in some cases quite high levels of yellow rust infection in coastal areas.

Septoria tritici is at quite high levels, though, and has had plenty of rain to splash inoculum around. Thankfully, the cold weather will have slowed its development, but if it remains wet this spring, it could prove difficult to achieve good septoria control.

Winter barley crops are now looking particularly yellow. Disease levels are low in most cases, as there has been a real shift to grow more disease-resistant varieties.

In more susceptible varieties, mildew and brown rust have survived the recent cold snap surprisingly well, so will need monitoring in the coming weeks.

Oilseed rape is looking particularly stressed as it begins the stem extension phase. One benefit of the poor weather in the past month is that it has restricted crop growth on large, forward canopies and prevented any early nitrogen fertiliser applications.

As a result only a small percentage of crops will require any growth regulation. Light leaf spot is becoming more easy to see, but compared with recent years, remains at low levels.

Spring drilling seems a long way off on heavier soil and some may already be questioning whether these fields will get sown this spring.

The 2016 harvest proved that spring cereals sown in mid-April still produced respectable yields and the key will be to increase seed rates to compensate for the shorter growing season.

This time last year I was already wearing shorts, enjoying a mild spring. In some places early nitrogen  had been on for seven weeks and spring drilling was just about finished. Obviously, this spring is pretty much the polar opposite.

With workloads starting to back up already, growers will be eager to get on and make a start on something. With this in mind, please spare some thought for seed-bed conditions when spring drilling gets under way.

The temptation is to get drilling when the land will travel, but it may still be slightly too early to produce ideal seed-bed conditions and may potentially limit establishment and yield. This will be especially relevant to pulses that really suffer from poor seed-beds and soil compaction.

Delayed drilling of spring barley and spring oats could mean that crop emergence may coincide with the main flight of aphids. This in turn could lead to high visual levels of barley yellow dwarf virus infection, as seen in other parts of the UK last year.

Chemical treatments in spring cereals have little or no benefit, as the crop is being constantly reinfested. As well as this, the short persistence of pyrethroids at this time of year means control is very limited.

Turning our attention to winter wheat, there will be some stressed-looking crops around the region with less-than-favourable root structures that have sat in wet soils all winter.

It will be essential to ensure active growth in these crops before any application of acetolactate synthase (ALS)/sulfonylurea chemistry for combating grassweeds to limit crop damage.

With this in mind, please refer to individual product labels to ensure that tank mixing or sequencing other ALS-inhibiting products is approved.

The problem with writing for a weekly magazine is that conditions at writing can be hugely different from those at reading. As I write, the weather outside is well below zero, and there is a healthy covering of snow.

By the time this is read, the temperature may well be 20C+ what they are now. Over the past three weeks we have had a difference in temperature of more than 25C from the coldest to the mildest, and back down to -5C at home last night. When it hasn’t been either freezing or snowing, it hasn’t stopped raining.

So where does this leave us? Some fields haven’t even dried out enough to receive any fertiliser. I haven’t seen a lot of response on those that have, but as mentioned earlier, that could change dramatically when the weather warms up.

Many people are desperate to get some drilling done, but accept there is no point in putting the crop in badly. The general feeling is that it is going to be a late start to the spring, and when the weather does change, things will be a bit hectic for a time.

Despite the cold weather, there is still brown rust about, particularly in Crusoe wheat. The wet weather is keeping the septoria risk high.

What people call a T0 fungicide may well turn into an early T1, and despite the perceived septoria resistance risk, I shall certainly be using robust azole rates with my early fungicides.

Forward crops of oilseed rape on well-drained soil have weathered the arctic conditions surprisingly well. Backward crops and those with wet feet have suffered badly. Note to self – bang the mid-August drilling drum even louder next season.