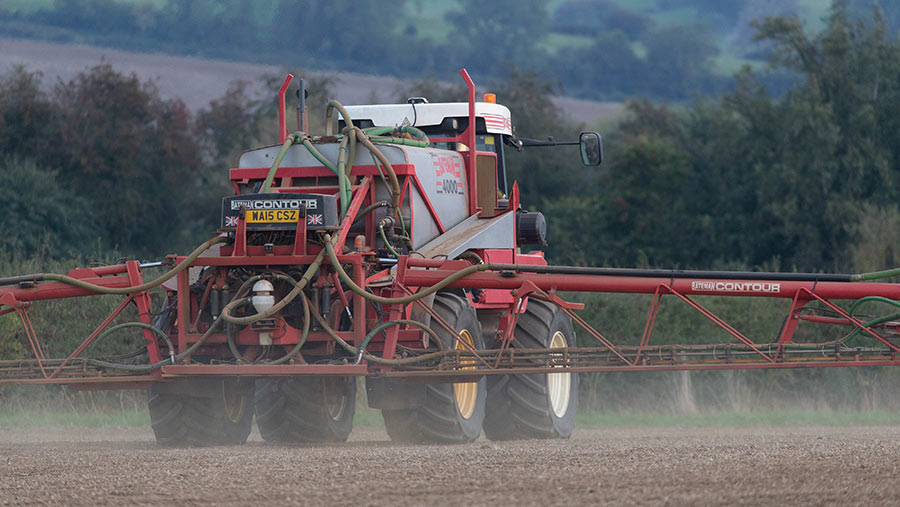 Cereal drilling has started earlier this year and aphids are being easily found in early-drilled cereal crops, bringing the risk of barley yellow dwarf virus.

Sprays may be needed to target the second generation using the T-sum calculation.

Another disease that agronomists will be keeping an eye out for in the coming weeks is phoma in oilseed rape, as the recent wet weather has increased risk in the lush crops.

Weather patterns are as challenging as ever, with the dry weather experienced so far this autumn ending in dramatic fashion.

Parts of East Anglia have recorded in excess of 100mm of rain in just 24 hours in the past couple of weeks. It is starting to feel like déjà vu – let’s hope not.

Drilling has started on cleaner fields, but elsewhere we are still sitting tight, as up until recently there had been negligible emergence of grassweeds due to a combination of the dry conditions and high blackgrass dormancy.

The recent rainfall is helping to break up soil clods, which should give us a good opportunity to create stale seed-beds.

The moisture, combined with falling soil temperatures, should also help with seed-bed quality and the performance of residual herbicides.

On the back of 2019, there has been understandable anxiety around delaying drilling, particularly on heavier soil types.

Where crops have gone in before grassweeds have emerged be mindful that a close follow-up spray with further flufenacet may be necessary.

The addition of metribuzin this year may help gain further contact activity at this timing.

Aphids
Aphids are easily found in early-drilled crops and early treatment may be necessary.

It is important to note the date on which the crop emerges, to help monitor when T-sum 170 days is reached and to correctly identify when the second generation start to migrate within the crop and spread barley yellow dwarf virus (BYDV).

The introduction of Wolverine, a group 4 wheat variety offering “resistance” to BYDV, will help mitigate some of the risk associated with BYDV where it has been planted.

However, as part of RAGT’s advice, its recommendation, as part of a stewardship to protect the longevity of the Bdv2 gene, would be to apply a single insecticide spray in the autumn.

Winter oilseed rape has in general established much better this year, particularly the earlier-sown crops.

Yet again, cabbage stem flea beetle began migrating into crops around the last week of August/beginning of September.

The earlier-drilled crops, which caught the rain in August and had reached 3-4 true leaves, were large enough to not be affected by grazing damage.

Moisture plays a key part to success of the crop and it was noted that oilseed rape following spring barley had potentially dried the soil out further, which had led to increasing establishment problems.

Companion cropping with Fenugreek appears to be having a positive effect on adult damage, however, we are yet to see how this affects larvae damage later on.

After last autumn’s awful weather, trying to get everybody to hold off drilling has almost been impossible, and I would say that 90% of the intended cereals are already sown.

Trying to hold off hasn’t been helped by the early maize harvest.

Luckily, grassweeds are not a major issue on most of my farms, as they are dairy orientated and have been growing cereals in a good rotation with maize and grass for years.

The ones that do have either ryegrass or blackgrass problems have received a pre-emergence of flufenacet + diflufenican.

Some will have also received Avadex (tri-allate) granules where the blackgrass is particularly bad.

All of these cereals will be followed with an aphicide and trace element package to encourage rooting.

Depending on the season, we will almost certainly be back in with another aphicide later.

This just seems crazy to me when we had a perfectly good seed dressing in Deter that meant we didn’t have to spray so many times.

Maize success
The maize harvest has by far been the stand out crop of the year, with many farmers very happy (yes, I said happy) as they have had exceptional yields, harvested without bringing any mud on to the road and, to cap it all off, they have sown a crop of either cereals or grass into near-perfect conditions afterwards.

I am trying to encourage cover crops to be sown into bare maize stubbles and these are tending to be untreated cereals at half rate harrowed into the stubble.

I’m trying a little vetch and phacelia seed in some, but nothing too fancy and expensive as I just don’t think they will get established and work.

There are some grass leys that have been sown over the past five or six weeks that are struggling.

I fear that with the weather pattern we have had, quite a lot of seed germinated and then died when it dried out again before the roots got really established.

This has led to a big acreage that is really patchy and will need overseeding as soon as the rain stops again (hopefully).

I have had some crops that were washed really badly when we had those thunderstorms – one 11.3ha field had to be totally redrilled to get rid of the channels created by the downpours.

This summer, I have seen more herbal leys and lucerne leys than ever before.

People are seeing that over the past three years in the dry summer, in many instances, the only plants that have grown have been deep-rooting ones.

There was no holding back the drills this year and as the last bits of spring barley and spring beans were getting harvested, the drills were well under way.

Everyone can remember 22 September, when the monsoon season started last year.

Although you should not farm the year before, growers were not coming unstuck again.

Cries of blackgrass and take-all fall on deaf ears as men and machines strain to get everything sown.

Many of these growers now have smiles on their faces as the 40mm of rain that fell this weekend will only assist with weed control and emergence, as nearly 80% is sprayed and drilled.

Harvest 2020 will stick in our mind as the summary of what was an awful year. Unfortunately, it is going to be the present that continues to keep on giving.

Rotations are all over the place and the consequence of this is that many wheat crops will be following spring barley.

Looking at the number of barley heads that are on the soil dual cropping maybe the name of the game.

Once again, pre-emergence is based around 240g of flufenacet in addition to a concoction of stacked herbicides tailored to grassweed pressure.

Known blackgrass areas will receive a top-up herbicide at peri-emergence based again around flufenacet.

Aphids are easily found in volunteers, and control will be required later in the month as this can often tie in with controlling surviving bean and OSR volunteers.

Rat tail fescue is an annoying problem, but is another weed that requires the pre-emergence application of flufenacet as a starting point for control.

The recent rains will heighten the slug risk and I will be keeping a close eye on known vulnerable areas.

Triffids
It is great to start the 2020-21 season with a success story, but OSR establishment must be an Oscar nominee.

Flea beetle have been active, but conducive growth conditions and early drilling have combined to produce some triffid-sized crops.

I would much rather have a crop, despite its size, than be deciding if we destroy it.

Virtually no pre-emergence herbicides were applied to OSR and this does lead to a challenge in controlling broad-leaved weeds.

The arrival of the Corteva product halauxifen-methyl (Arylex) has filled in some big post-emergence gaps, but it is not bulletproof.

There are added complications with product timings, particularly when using Centurion Max (clethodim), so planning is key.

This then leads us on to the issue of propyzamide timing. I believe to get the best efficacy out of the product in the north of England, you must apply it in October. So, I will be leaving sheets in a couple of weeks.

Do not worry about the big leaf canopies affecting performance – they are not ideal, but it still works.

When can I drill winter beans? This is a question I get asked often. I believe you can start in early October and, as such, people will be looking to drill as you read this.

With the shortage of bean seed, clients have asked about drilling spring beans in the winter. If it is a hard winter, then frost kill will be a significant problem.

Also, do not drill spring beans in early October, wait until early November.

Pre-emergence is crucial to gain what weed control we can.

These will be based around a propyzamide pendimethalin base. Let’s hope that 2020-21 cropping year behaves itself.

As an inevitable consequence of what happened last year, most farms in the South have moved winter cereal drilling dates forward this year.

On balance, this has been a positive move, as the quality of seed-beds produced has been excellent.

October has now ushered in the first meaningful rains of the autumn, which has led to rapid and even crop emergence.

Given the speed of this development, attention needs to be focused on the threat of barley yellow dwarf virus – 170 day degrees above the baseline of 3C will occur three to four weeks post emergence.

A pyrethroid application will be planned to meet this threat and, if required, a top-up residual herbicide will be tank mixed at the same time.

While on the topic of pests and wet weather, extra vigilance should be given to emerging first wheat crops following OSR for the presence of juvenile field slugs.

OSR is an excellent incubator for slugs, and clutches of eggs can lay dormant for months before hatching when conditions are right.

Trapping can help assess risk and, if necessary, an application of good-quality ferric phosphate pellets at 35-40/sq m will provide control.

Despite this rush to early drilling, regard still needs to be given to fields with grassweed problems and second wheat.

Where required, stale seed-beds have been set up with the aim of flushing weeds prior to spraying off with glyphosate and drilling mid to late October.

Oilseed rape
Taking everything into account, OSR crops are looking in great condition, and the curious absence of flea beetle has been welcome relief from the previous year’s onslaught.

Mid-August-sown crops are now at 6-7 true leaves, with the canopy closing in fast.

Any outstanding applications of the contact graminicide clethodim will need to be applied before the 15 October cut-off date, assuming crops are within the size limit of six leaves.

With current showery conditions, focus will now be turning to the presence of phoma leaf spot infections.

Early epidemics are the most damaging to yield, and fungicide treatments should be made when the characteristic leaf spot infections exceed 5%.