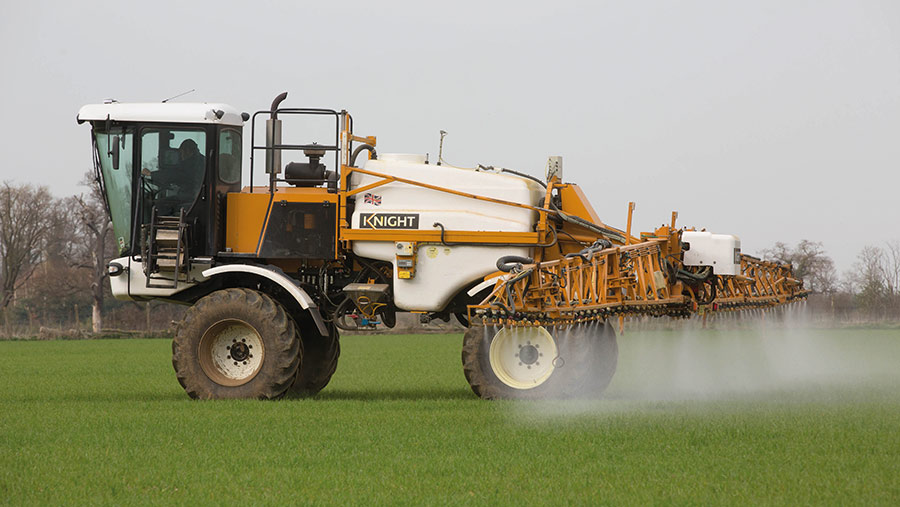 Diseases are emerging in winter wheat crops as the weather gradually warms up, with septoria and yellow rust being seen as plans are made for early T0 fungicide sprays.

Winter barleys are showing signs of rhynchosporium, net blotch and brown rust, but crops are looking generally good despite the long wet winter.

Spring drilling is under way on lighter chalky soils in the south of England with agronomists warning not to push too quickly into trying to make good seed-beds if soils are still wet underneath.

Forging ahead with cultivations when conditions are not right can damage soil structure, and soils will dry out to depth, meaning crops will struggle for moisture if there is a dry spring.

A good spell of settled dry weather combined with strong winds in late February mean land has dried up quickly. This has allowed the first dose of nitrogen fertiliser to be applied to autumn-sown crops, as well as the completion of outstanding spray mixes which were unable to be applied in the autumn. The cold snap in February has been useful in reducing the development of yellow rust and mildew in cereals.

Winter wheat crops sown in September look particularly well. Those sown from mid-October onwards, particularly on heavier soils, are looking more patchy and have been more affected by waterlogging due to difficult seedbed conditions.

Yellow rust infection levels are beginning to increase quickly again after the cold blast in February. On susceptible varieties the disease can be spotted at walking pace rather than having to crouch down and look hard for it. Several days of coastal mists in early March will certainly have aided the development of yellow rust, so fungicide choice and rate at the T0 timing will vary according to the level of infection.

High disease levels
Winter barley crops have remained surprisingly green throughout winter and have not turned yellow despite soils remaining wet for long periods. Disease levels are particularly high, with net blotch the main culprit, along with brown rust.

The levels of disease are noticeably higher where the winter barley is following a crop of spring barley and there are lots of volunteers present to provide a disease carryover. Some crops will require a T0 fungicide to limit the spread of these diseases.

Crops sown on heavier soils in October are struggling. Thankfully, land has dried sufficiently to allow the first dose of nitrogen fertiliser to be applied. In winter rye crops, brown rust levels remain very low, although that could soon change once the temperatures rise.

Forward crops of oilseed rape were hit particularly hard by the cold weather in February. The damage appeared dramatic. However, with new leaf growth appearing, the effects are beginning to fade away.

As in winter cereals, the blackgrass control has been excellent where the planned autumn herbicide programme was applied. Other grassweeds such as ryegrass and sterile brome have been well controlled, and it is nice to see no more spring barley volunteers appearing.

Where autumn herbicides could not be applied the key weeds are now being controlled with contact-acting herbicides. The growth stage cut-off timing for their application provides a narrow window, so check crops before spraying.

Now oilseed rape is moving into stem extension it will soon be time to decide which will require some growth regulation. The main form of growth regulation is to delay the first nitrogen fertiliser dose, with none applied so far to forward crops. With light leaf spot beginning to appear, it will also be an opportunity to apply a fungicide to reduce its development.

As spring rapidly approaches, it is good to report that we seem to be back in the cycle of a relatively normal season after the hiatus that was 2020. Most crops were planted and are in good order, and consequently we have some promising outlooks coming into the spring.

Winter oilseed rape is now a very minor crop in the area, but those that are established are rapidly approaching green bud stage and have had their first nitrogen top dressing. Crop structures are as near to perfect as I can remember, which makes management so much easier. The first spring fungicides will be applied in about 10-to-14 days’ time.

Winter barleys are looking extremely good, are well developed and have quite high tiller numbers, which I always consider to be a plus with this crop. The well-developed canopy for the time of year has meant that rhynchosporium and brown rust are well in evidence in many crops.

These crops are due to receive a T0 fungicide in mid-to-late March. Pre-em herbicides have worked extremely well on the whole. Many crops of winter barley were preceded by spring barley in 2020, planted in response to not getting a winter crop drilled in autumn 2019.

Cause for concern
Consequently, many winter barley crops now have an infestation of spring barley volunteers growing in them. While not a problem in itself, the extremely high levels of rhynchosporium on the spring barley volunteers is a major cause of concern. These crops will require a pretty robust fungicide programme if we are to keep on top of this yield-robbing disease, especially if the weather continues to favour its development.

Winter wheat crops are also generally looking pretty good, with far better crop structures than 12 months ago. Mild weather for most of the winter, with above-average rainfall, has led to a massive build-up of septoria, with many of the lower leaves in some crops completely consumed by the disease. T0 programmes will commence in the more forward crops as we approach the end of March.

With a reasonable area of spring barley to be planted, along with the forage maize and beet crops, we could do with a gradual dry up and the opportunity to produce some good seed-beds for these crops. We can but hope.

With the first reports of barley yellow dwarf virus in cereal crops coming in, it is important to keep an eye out, especially on later-drilled winter cereal crops which haven’t yet seen an insecticide. Although the recent cold spells may have allayed fears, the threat is still real.

Between the recent cold snaps there was warm weather, conducive to aphid flight, which may well have brought aphids into crops which were clear before the first cold spell. It will pay dividends to get out and have a look. If aphids are present, lambda-cyhalothrin will be applied, either on its own, or in a tank mix with manganese and phosphites where tiller manipulation is required.

Spring drilling is getting under way, with good progress having been made on the lighter chalky soils in the area. Peas are nearly all in and chitted. Where primary seedbed cultivations were done in the autumn, a good chit of weeds has come, allowing a good kill with glyphosate prior to secondary cultivations, or in some cases drilling straight in.

Weed control
Pre-emergence applications of clomazone and pendimethalin will be made to guard against further weed activity. Variable-rate seed plans are now being tweaked on Omnia to take seed-bed conditions into consideration for the drilling of spring cereal crops over the next couple of weeks.

As we find ourselves coming out of yet another wet winter, the quest for a dry seed-bed is foremost in a lot of grower’s minds. Please remember that forcing this with cultivation is usually a waste of diesel and steel, usually damaging soil structure and drying the soil out to depth.

When the almost inevitable dry spring arrives, spring crops will struggle for moisture in these situations, both from a dry seed-bed, and also from shallow rooting due to pans limiting root penetration. 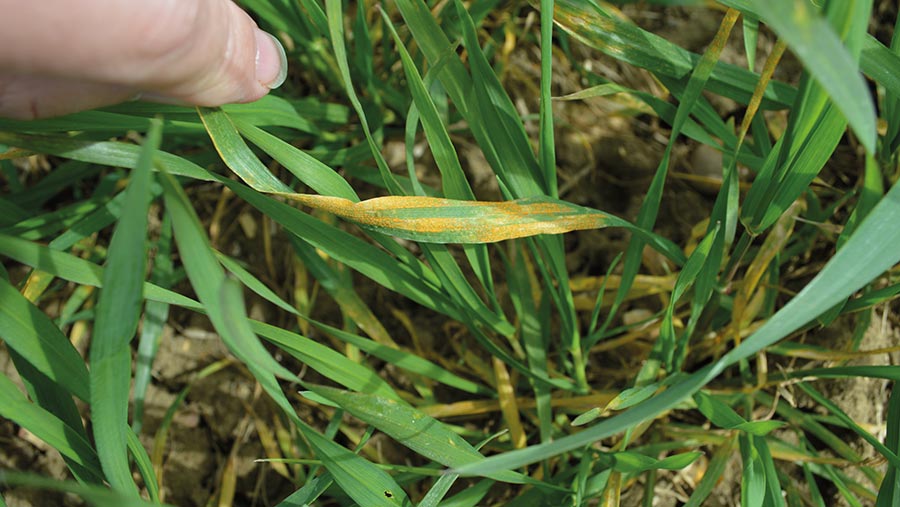 AICC (Sussex)
What a strange start to the year. What would normally be conferences/technical meetings/skiing holidays/shooting/Caribbean getaways, turned into looking out of the window onto incessant rain and cursed webinars and Zoom meetings. I just wish I’d turned my microphone off before I fell asleep and started snoring.

And then the rain stopped. And stuff started happening. Fertiliser going on. Ground being moved. Spring drilling. Spring pre-ems being ordered when we don’t even have the prices confirmed yet. And it wasn’t even the end of February…

We also had the mini beast-from-the-east. It has proven an extremely cheap fungicide/growth regulator on anything that might have been scaring us, especially in the oilseed rape department.

Apparently it will also have given the cabbage stem flea beetle larvae a decent kick up the jacksie, and that can only be helpful – time will tell.

Fortunately in our patch, things are looking a lot better than they did this time last year. Pre-emergence herbicides and follow-ups have worked extremely well, hopefully in a lot of cases negating the need for spring overspraying.

This must help with herbicide resistance, particularly with our increasing reliance on single-site chemistry. Where people took the opportunity to get their amide sprays onto  oilseed rape, grassweeds are dying superbly, again contributing to the anti-resistance fight.

My first fungicide sprays on both wheat and barley are likely to be fairly chunky, given the disease pressure we are already seeing, and the fact that the most useful bits of our armoury have effectively been taken away from us.

However, it is only mid-March, and another two weeks of cold, dry weather could change that significantly. It’s impossible to predict the future, but what I can say with absolute certainty is that the days will get longer, the spring will happen, and on 20 March I’m getting my first covid jab. Here’s to a return to normality.