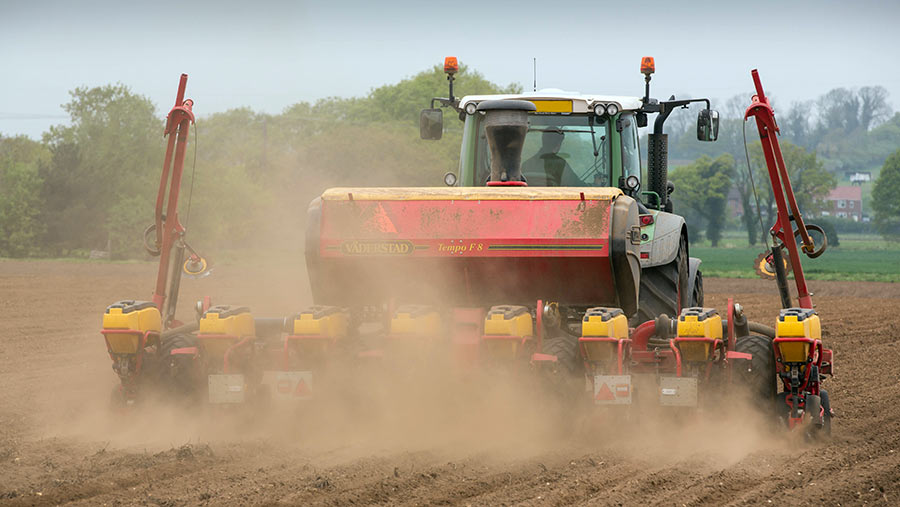 It’s full steam ahead for maize drilling in the West, although soil temperatures are sitting at 10-11C.

Seed weevils are proving to be a problem, with spring beans in the North being plagued by the pest, while in the South, there are concerns on the potential impact of weevil damage on newly emerging peas.

The T2 application will be ready very shortly as the tips of the flag leaf are just beginning to show in the most forward wheat crops.

Winter barley is now just showing the awns and it will receive its T2 fungicide in the next week, if it hasn’t already been done.

Most of the winter barley looks well and I have to say I’m still impressed with the hybrids on the more difficult sites.

The spring barleys are all up now and many are in need of a drink.

Most of my barley acreage is grown for feed so a split dose of fertiliser is applied with some in the seed-bed and the rest applied as soon as the tramlines are visible and we have some rain forecast (hopefully).

The winter triticale I spoke about in my March article that we put sheep on to graze back is now storming ahead and has the ear out.

It has received a fungicide application of pyraclastrobinn and epoxiconazole.

Maize drilling is now at full steam ahead.

Generally, the seed-beds are good, although the soil temperature is not racing away as it is sitting at around 10-12C at the moment.

The seed is being drilled at 75-100mm deep to insure it’s in moisture.

Last year, far too much was drilled too shallow and germination was effected.

Going forward we may all be drilling at this depth to try to avoid rooks having the non-mesurol-treated seed.

Some early drilled maize is now up, but I’m sure the crops drilled now will catch them up.

Although conditions are relatively dry at the moment, the pre-emergence sprays are still being applied as the growers see the benefit from these even in a dry year, as it just takes the pressure off when the crop emerges.

Any extra nitrogen that the crop is going to require that won’t be fulfilled by the muck and slurry that has been applied to the maize fields has been put in the seed-bed.

I have given up advising farmers to apply nitrogen to a maize crop that’s up, as it nearly always scorches the crop, which effects the yield and gives me a lot of grief.

For the Monty Python fans among you, many will remember the Black Knight sketch, where the valiant knight progressively losses his limbs and still vows to fight on.

That sketch reminds me of many OSR crops this year.

They struggled to get going in the autumn, were then ravaged by flea beetle, then ravaged by pollen beetle and then to top it all off, a -5C frost followed by a 23C cooking by the weather.

These crops are valiantly trying to pod, but I fear that the result will be disappointing.

To add insult to injury, there are some very good crops out there and, as you read this, these will be receiving some fungicide.

The dry weather does make the risk of sclerotinia low.

However, I view this as an opportunity to cover the full remit of late diseases, alternaria, botrytis, and light leaf spot.

Seed weevil and pod midge can be found and there has been some selective spraying in known hotspots.

The precious few millimetres of rain that arrived recently has certainly been a tonic.

Wheat crops have once again flushed up and started to turn the rich green colour we love to see.

T1 sprays have now been applied and it is countdown to the T2 timing.

Yellow rust has been the mystery disease of the season – “now you see it, now you don’t”.

It continues to bubble around in the background, producing new foci and then not developing further.

It has panicked me into ensuring that my fungicide choice has a strong rust control element in it.

The only varieties that my clients are growing, where I feel confident in the AHDB ratings, are Costello and Siskin.

Septoria has not been the big challenge to date, as spray timings have been good and rainfall low.

This, of course, can all change, and T2 will be a SDHI, azole and chlorothalonil mix.

Nature is a wonderful thing and it is amazing how opportunist it can be.

Groundsel is a fine example of an insignificant weed in many respects, as it flowers early and is not very competitive.

It sneaks through the autumn blackgrass armoury and now is less sensitive to the sulfonylurea products.

Unfortunately, ignoring it is becoming very hard as the numbers multiply.

Again, disease levels are low and most have just received chlorothalonil for ramularia.

The aim will be to apply a more robust programme at ear emergence.

Winter beans are now flowering, and we are taking advantage of the dry weather to delay chocolate spot sprays as long as possible. 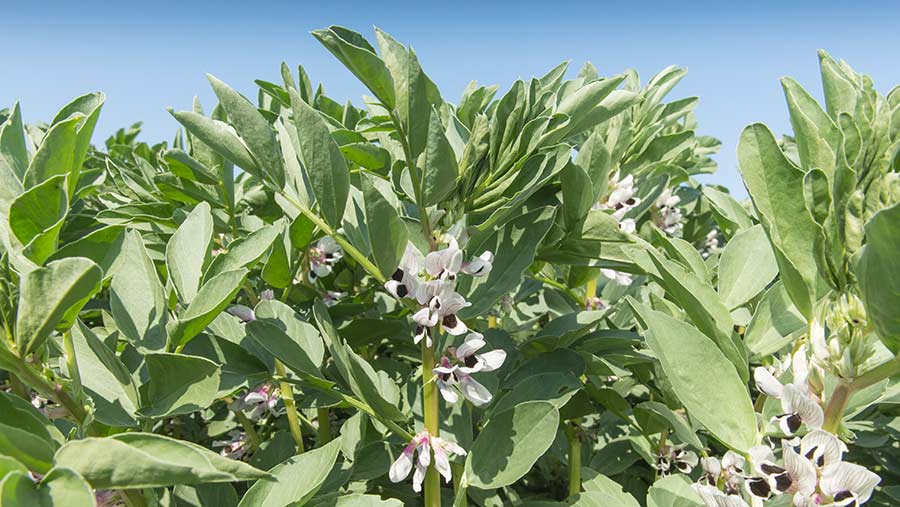 Spring beans are being plagued by weevil on some farms and, reluctantly, we are spraying.

The dry weather has meant that pre-emergence weed control has been mixed and the prospect of using bentazone fills me with horror.

The bank holiday showers were most welcome on struggling spring cereals and pulses, as well as the recently planted maize and potatoes.

Most of the local maize went in with a placement fertiliser ranging from di-ammonium phosphate to bespoke maize starter compounds.

This will be followed up with an early foliar feed to support rapid growth and make the most of the late-May sunshine.

After a cold and claggy start, spud planting has gone well in the kind conditions of recent weeks.

Soil temperatures have stayed up and maincrops are emerging fast.

Early liftings of new potatoes have begun and are looking good, though the cold has slowed tuber development on exposed sites.

Oilseed rape is at full flower with podset well under way.

No insecticide has been required yet this spring, but a bee-friendly product (Mavrik – tau-fluvalinate) for seed weevil is likely with the petal fall spray.

Especially if an azole is included for sclerotinia suppression.

Septoria and rusts are present in winter wheat. In some varieties, notably Graham, yellow rust symptoms are atypical, resembling a scorch-like necrosis.

T2 sprays, dependent on variety, will be based around an SDHI (benzovindiflupyr), plus a strobilurin, azole and chlorothalonil, and are likely to be due in the next 10 days, when the flag leaf is fully out.

If disease risk is high and rust is present, then remember that chlorothalonil may reduce the eradicant effect.

Crucially – ensure you hit the flag leaves of main stems and all tillers.

They must be protected, regardless of how close the gap since T1.

Mildew is bubbling away in the base of some stressed wheat – the addition of cyflufenamid or proquinazid to the T2 will keep it in check.

The odd bruchid beetle has been spotted, but there is precious little podset on most of my winter beans as yet, so no panic there.

More concerning is the potential impact of weevil damage on newly emerging peas.

Be mindful of resistance management, repeat application restrictions and risk to non-target organisms when endeavouring to keep on top of recurring infestations.

The use of a water conditioner will significantly alleviate hard water lock-up of pyrethroids, and a silicone wetter can help improve target contact within the growing points of the plant.

Finally, the beginning of May brings some desperately needed rainfall. Some parts of Essex have received as little as 4mm for April, with the effects now beginning to to show on some of the lighter soils.

The majority of heavier soils are holding on well, mainly due to the drier winter, which allowed for much better establishment and rooting, aiding plants to recover quicker once rainfall occurred.

After an unusually (and fortunately short) hot spell over Easter, cereals have progressed rapidly through their growth stages, with the flag leaf becoming visible in barley crops.

These are now at awns visible, and with a milder spell will quickly reach ear emergence bringing on the T2 timing.

Forward crops of wheat are just beginning to reach growth stage 37, and now that we are receiving some rainfall it would be worth monitoring all crops for late growth regulation, particularly on for weaker strawed varieties.

With large amounts of nitrogen not being fully used under the dry conditions, there could be a sudden uptake leading to an expanse of growth and biomass.

Varieties such as Gravity, Kerrin and Zyatt, even under drier conditions so far, have had lesions spread up the plant.

Winter oilseed rape is beginning to finish flowering and although there is mixed potential it appears to be podding well, with little evidence of aborted pods.

Again, the only concern is the drier spell around final solid nitrogen doses.

If you are concerned about level of uptake or if last doses were missed, now is the time to test to the top leaves for nitrogen.

The optimum level is 4.5% and if lower, at 90% petal fall, apply Oilseed Extra to ensure nitrogen is directed directly to the pods where required.

Continued monitoring will be important, and remember the threshold of one wingless aphid per four plants.

Once met, it is more advisable to begin with Biscaya (thiacloprid) as this will give better knock-down activity and allows for Teppeki (flonicamid) later in the programme, which is less harmful to beneficiaries.