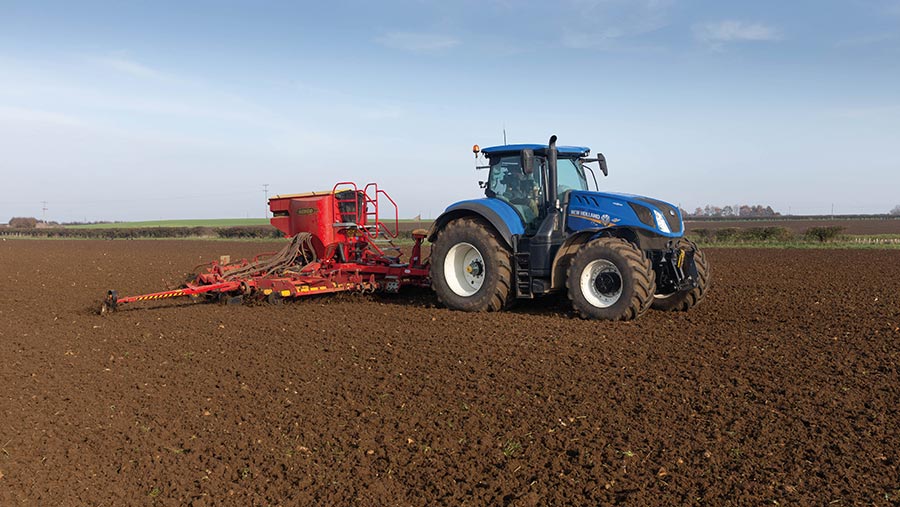 The mild autumn has been perfect for slugs, and their control has been a bit of a headache, especially in wheat crops following OSR as well as rye crops in the south.

See also: How one Yorkshire direct driller is tackling a drainage problem

Oilseed rape canopies are also looking big thanks to the ideal growing conditions and this could allow for some nitrogen fertiliser savings next spring, as long as the dreaded pigeons don’t severely hammer crops.

November has been exceptionally dry so far. Rarely has heavy land walked so well for the time of year, to the point where the calendar has to be checked to see if this is real.

The good conditions have allowed all winter wheat to be sown as planned. Even those fields after root crops and maize have seeds planted into nice seed-beds.

Autumn spray programmes have been completed, which has given crops the best possible start, particularly with reference to grassweed control. This is refreshing and in stark contrast to the previous two autumns where drilling and spray programmes were haphazard.

The mild weather has continued during November, so much so that the early sown oilseed rape canopies are above knee height. These forward crops will not require any early nitrogen come the spring, and there will be scope to reduce the total nitrogen dose.

Phoma has steadily been increasing and reached the threshold for spraying with a fungicide on the more susceptible varieties. Often the fungicide has been mixed with herbicides containing propyzamide, with or without aminopyralid.

There has been the dilemma, though, of whether to apply these herbicides to dense oilseed rape crops. Waiting for the crops to open up will require many frosts, which are not guaranteed, and then land may be too wet to travel to apply these herbicides. Applying them now risks some of the aminopyralid not being able to hit the broad-leaved weeds such as mayweed enough to get satisfactory control.

Cabbage stem flea beetle larvae can be seen in all crops. In most cases the scarring on petioles is low. However, it is noticeable that the earlier-sown crops have much higher larval numbers. Time will tell what impact these larvae will have on crops in the coming months.

Contact-acting herbicides have been applied for sterile brome control in winter wheat. Cool temperatures can often limit herbicide efficacy at this time of year. However, the mild weather and good spraying conditions this month have never been better to achieve good brome control.

The mild weather has also proved problematic in that slugs in winter wheat following oilseed rape have continued to cause significant damage in some fields despite several applications of slug pellets.

Discussions are continuing with growers regarding fertiliser applications to crops next spring. Phosphate and potash holidays or rate reductions are options for some, where indices allow.

In the case of nitrogen it is still a very responsive input and the break-even ratio will differ from farm to farm, depending on their average nitrogen price and the expected crop price.

For those who bought all their nitrogen fertiliser early, and with good forward prices being offered for the growing crops, the nitrogen totals will require little or no adjustment.

Clement weather at the moment is allowing later-drilled winter wheat after sugar beet to go into good seed-beds. However, decisions are being made on following cropping on a farm-by-farm basis regarding the amount of nitrogen fertiliser currently purchased.

For those with little to none in stock, lower-input spring cereals are looking more tempting. Whatever is decided, it is more important than ever to ensure crops are drilled well into good soil structure to allow optimum root development and utilise as much soil nutrition as possible.

Although nitrogen prices are high, it will be a false economy to focus spend on nitrogen at the cost of sulphur. Nitrogen and sulphur have a symbiosis within the plant, and cutting back on sulphur will reduce the efficiency of your nitrogen.

With temperatures dropping, propyzamide applications to oilseed rape for grassweed control will now begin. Depending on weed burdens, applications may also include aminopyralid.

Prothioconazole will be tank-mixed with the herbicide for control of light leaf spot. Generally, OSR crops are looking well, with the majority being drilled in the first half of August.

Cabbage stem flea beetle larvae are by no means absent, but populations are lower than in recent years, and this, combined with good, even establishment, means potential is certainly there. However, there is still a long way to go, and pigeons are now turning their attention to certain areas of some fields.

Some fields are starting to change colour, indicating that the plant is running out of its autumn nitrogen. Where pigeons do hit the crop hard over the winter, an early application of nitrogen in the spring will be applied to get it going and producing leaf again.

Compared with the past few autumns, 2021 has proved to be very benign. Everything that was planned to be planted has been planted, and some more besides in some cases, as the weather has provided good opportunities.

Most crops received a pre-emergence herbicide and these have worked well, with many crops being spotlessly clean. My major worry this autumn remains BYDV.

At the time of writing, temperatures have taken a dive down to more seasonal levels. This coincides with the number of trapped aphids beginning to tail off, so I believe it is fair to say that migrating aphids should now stop being an issue.

There are a large number of farmers and advisers out there now who are young enough that they have probably never seen severe BYDV. I am picking up on the grapevine that on some units an aphicide/aphicides is/are not going to be used, either in the belief that this is a relatively minor problem or that the beneficial predators will do the job for them.

All I can say, as someone who clearly remembers BYDV prior to seed treatments, is: “Good luck with that one.”

At best this is a very risky strategy and at worst, possibly financial suicide. I recognise that I work in a part of the country where risk is higher due to climate and proximity to the coast, but this is a disease that has the potential not only to reduce yield and quality, but to completely wipe out a crop. I would urge everyone to pay it the respect it deserves.

Many crops are now extremely well established following the very mild spell. As the ground is also quite dry, it is fair to assume that root development will be better than it has been for several seasons.

Given the current crisis with nitrogen prices, this should help us all in the spring with nitrogen use efficiency. Unpalatable though the price of N is, it still pays to use. It is just a question of how much. I would urge anyone who has not taken a position on N to do so without delay.

OSR crops on the whole are well established with large canopies. This in itself will help reduce the risk of phoma developing into full-blown stem canker. I am taking the view that one robust application for phoma and light leaf spot control should suffice this autumn.

With most crops looking well going into winter, let’s now hope for a decent growing season in 2022.

It has been a bit of a protracted drilling season. Most people have finished now, and the recent spell of kinder weather has reinforced the policy that getting stuff in well is better than getting it in on time.

I was discussing this with one of my farmers, who said: “That’s all well and good, but only any use if we could all predict the future.” Too true.

We seem to be in a settled spell now, which is helping with follow-up herbicides and aphicides. Aphid catch numbers have dropped significantly over the last couple of weeks (see my last Cropwatch) and the colder nights are reducing the risk even further.

They are also bringing soil temperatures down to propyzamide-suitable numbers, so those recommendations are going ahead, probably as I’m writing this.

Slugs are continuing to be a headache, especially in rye and for some reason in and after oats. The wet August must have produced a high number of eggs that have taken advantage of the mild autumn and left us with millions of juveniles to contend with. 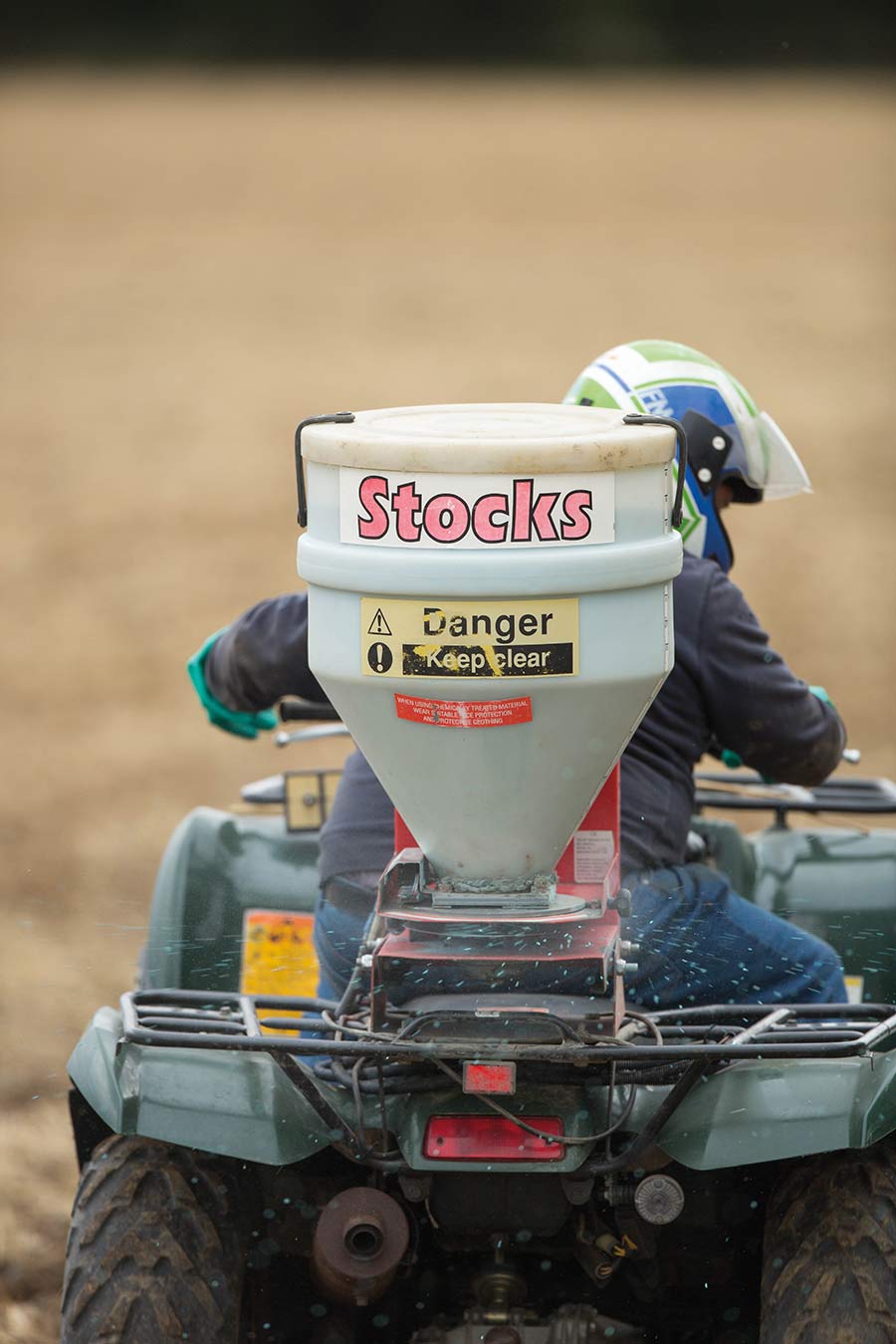 Unfortunately, it’s the little ’uns that are most difficult to control with slug pellets. Let’s hope the frosty nights sort them out.

As we wind down towards winter some interesting conversations are taking place over a cup of tea in the farmhouse kitchen. Fertiliser prices are an obvious hot topic, but so too are wheat prices.

Then there’s re-wilding, environmental land management schemes, “regen farming” (which as far as I can see is what we used to know as “farming”) and things like legume and grass mixes.

My wife told me that the price of milk had gone up in Tesco and my thoughts were, it’s about time too – and we ain’t seen nothing yet. Some farmers are scared, others are excited. I don’t know what I am.

Although nitrogen prices are high, it will be a false economy to focus spend on nitrogen at the cost of sulphur.