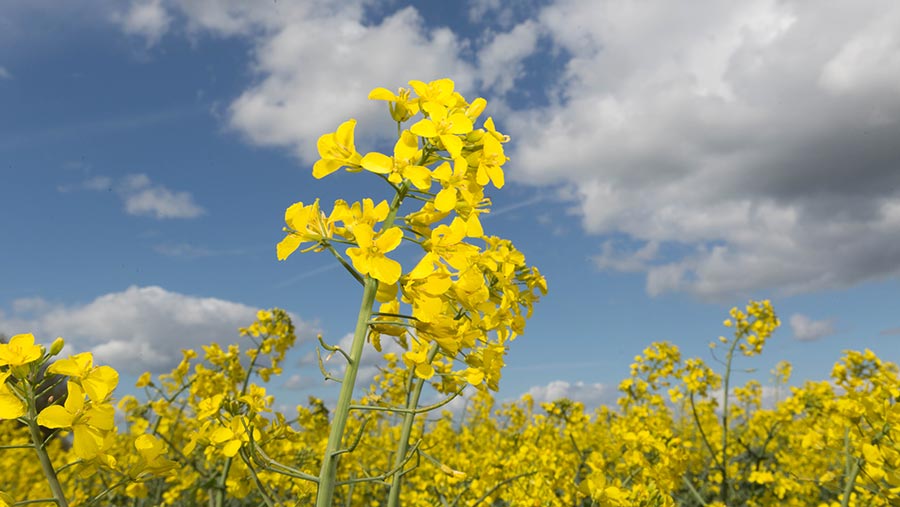 Although last week’s rain has been very welcome for crops on lighter land suffering in the dry conditions, drought remains a concern in the South and East.

In the East, stress on winter cereals is becoming more evident on lighter, more drought-prone land, with winter oats suffering the most.

In the South West and North, rain has been more substantial, although winter barley crops have been so stressed in the north that the watering is unlikely to be enough to help them fully recover.

The rain will also increase the risk of disease, with rhynchosporium likely to kick off in the West if winter barley fungicides are delayed

A more normal spring has helped to produce crops that are behaving and looking a lot more like they should compared with this time last year.

At the time of writing, the most forward winter barley crops are just beginning to show the tips of their awns through the flag leaf ligules.

A week of relatively wet weather and a fortnight since T1 applications were made means most of these crops will be due a T2 application sometime in early May.

There has been quite a bit of abiotic spotting this spring, particularly in the variety Cassia. With the recent wet week we can expect rhynchosporium to kick off again in crops if treatments are delayed.

Winter wheat crops are quite variable in their development, mostly reflecting drilling date. Some earlier planted crops in favourable sites now have the flag leaf tip just visible, meaning that growth stage 39 is likely to be reached a little earlier than is the norm.

Later drilled crops on colder or heavier sites, however, have only really just reached GS32, but these crops had final leaf three emerging at GS31, indicating that they have dropped a leaf in their development.

With a lot of wind through this spring there have been quite a lot of incidences of leaf tipping, which has given the affected crops an untidy appearance until the new leaf has got up above the damage.

Yellow rust has reared its ugly head in early planted, susceptible varieties this spring, but these crops have responded well to treatment and the infections have dried up rapidly.

With most oilseed rape crops over half way through flowering, the management of this crop is nearly all over. Crop structures and canopies are, on the whole, as good as they have been for several seasons so one might reasonably expect crop performance to be good.

I have, however, learned over the years that nothing can be taken as a given with this crop, and right up to the point of combining it will be impossible to accurately predict yields.

Spring barley crops are establishing well, but with a wide range of drilling dates, from late February through to late April after forage brassicas.

With one week of wet weather on them, many spring barley crops have already had more rain than they had for the whole growing season last year, so it will not be unreasonable to expect a better performance  this season.

Some much-needed rain finally fell last week, to the relief of everyone. Winter cereals on light land and thin soils were really struggling after a prolonged spell of dry weather.

The drought stress symptoms on winter barley in particular have been so severe that in some cases the recent rains are unlikely to be enough to help them fully recover. Poor nitrogen uptake has affected all winter cereals which has also exacerbated the problem.

In contrast spring-sown crops have suffered less in the dry conditions, but nonetheless have improved since last week’s rain.

T1 fungicides are being applied to winter wheat. With the range of disease resistance ratings in wheat varieties wider than ever, the level of fungicide input required has varied enormously.

This will become more important looking ahead due to declining fungicide availability and efficacy.

Annual broad-leaved weeds such as charlock, cleavers and fat hen have also been controlled at the T1 timing.

However, there is a niggling suspicion that last week’s rain might cause a late flush of weeds, particularly in more open canopies.

Yellow rust has largely been kept under control from the T0 fungicides, but some mildew has begun to creep in at the base of wheat stems where crops are dense.

Winter barley canopies vary hugely, from those on sand soils where they are very open and thin to hybrid varieties on heavy soil types which have received organic manures – where the crops are difficult to walk through.

As a consequence, the late season plant growth regulator requirements have varied considerably.

Many crops have not required any further growth regulation and where they have been warranted the rates have been lowered compared with previous years.

T2 fungicide timing is approaching in winter barley and chlorothalonil will be part of the mix to prevent ramularia.

Oilseed crops are flowering and sclerotinia fungicides have been applied. In some cases, the crop does not seem able to reach full flower as the previous effects of cabbage stem flea beetle damage have meant more compensatory branching, which means flowering is going to be over a longer period.

Pod set on the main racemes has been variable as when these first flowers were open there were some frosts which appear to have affected early pod formation.

Spring barley crops look well and will soon be receiving their T1 fungicide. Weed emergence has been staggered due to the prolonged dry weather so herbicide timings have been delayed to account for this.

The talk of the moment has moved away from oilseed rape viability, Brexit and Chris Packham and moved on to the drought.

In our immediate vicinity, we have barely had enough rain to wet the concrete for well over a month. “It all needs a good drink” is currently the most popular phrase heard.

Having said that, the dry winter, the good establishment for both spring and winter crops and a mild February have allowed the crops to get a decent rooting system, and they are not suffering as much as they might be.

If the dry weather continues, it might give us the opportunity to pull back on septoria-aimed fungicide strategies, but we’ll still have to be wary of the rust risk, especially with varieties like Crusoe.

My fear is that we’ll go from a long period of dry to a long period of wet which means we may be fighting both. Memories of 2007 and 2012 come to mind… probably best not to think about that right now!

Once again, oilseed rape has displayed remarkable tenacity. Yes, there are some crops that are not worth spending any more money on, but there is a lot more yellow about than I was expecting to see a month ago.

The results of this year’s harvest will bring about many discussions on its general future and, if we stick with it, what husbandry we will be attempting to make it work.

My unscientific, anecdotal observation is that the whole countryside seems to be about two to three weeks earlier this year than the last couple of years.

I wonder if that means sprayer operators will get the chance to sneak in a last-minute holiday in July? Probably not – something will come along to keep them busy.

Crops on lighter land around here really did not like the Easter bank holiday weekend’s temperatures. Stress on winter cereals is becoming more evident on lighter, more drought-prone land.

The crops showing the most stress are winter oats. In places these are now nearly completely brown with stress induced leaf spot, with variances in stress levels easily identified by soil type.

Some spring drilled crops are also flagging to different degrees, with the least affected being ones where seed-beds were prepared over winter or in direct drill situations where moisture was conserved.

This year, more so than in the recent past, getting sugar beet up and away is a top priority with regard to getting it to a stage where it will harden to infection from virus yellows. Most of my beet is between cotyledon stage and four true leaves.

With the first reports of peach-potato aphid (myzus persicae) being found in crops, thoughts now turn to application of insecticide to take these out. Fortunately, thiacloprid has been granted an emergency approval for two applications in sugar beet this season, so the armoury has been widened from the single application of flonicamid.

Thinking about label restrictions, the first application to the crops if needed will be thiacloprid. Looking at all pesticide applications to beet this year, tank mixing and application intervals will need carefully thought to reach the desired outcome without unduly stressing the crop.

Depending mainly on drilling date, T1 fungicide applications have been or are about to be applied to wheat crops. Although conditions have been conducive for a low septoria season, the disease is still present in the base of a fair number of crops.

With leaf five now rubbing on leaf three, rapid transfer of this disease up the plant is possible, especially if the weather becomes unsettled and we get some rain, or even heavy dews.

SDHI fungicides are still being considered in these situations, especially as it will bring an element of drought tolerance to the crops as well.