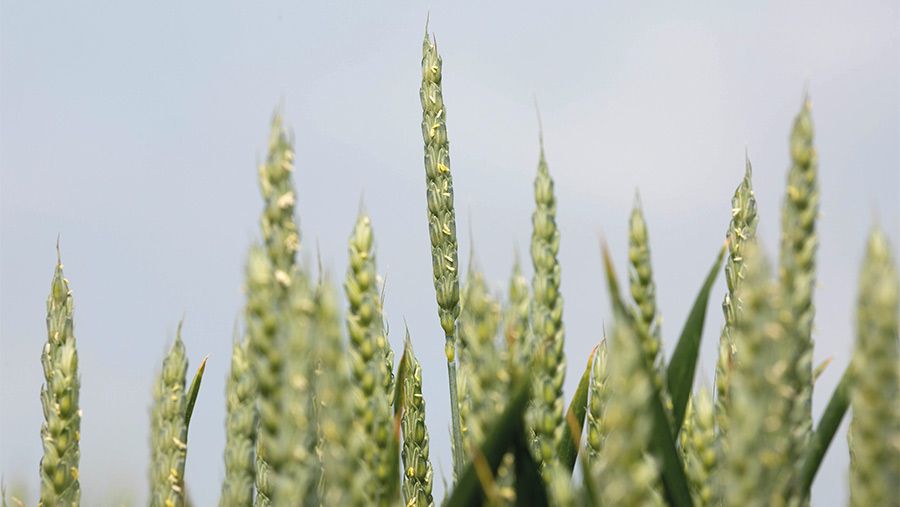 The rain has finally arrived in parts of the UK, although with some wheat crops flowering, it raises the risk of fusarium.

Crops are very variable and the wide range of maturities within fields could see a greater number of immature grains risking malting or milling quality. Growers are being advised to consider segregating grain from affected fields .

Thoughts are starting to turn to next season with variety choice and the drilling date debate, with the dangers of drilling earlier in response to last year’s wet autumn.

The nightmare season from hell continues. Since my previous article, we have endured three-and-a-half weeks of burning sunshine, high temperatures and drying winds.

The middle of this week saw the first significant rain in weeks. It was gratefully received but, on the whole, will have been too little too late.

See also: How new herbicides can get bad blackgrass fields back on track

Late-drilled winter crops and spring cereals have lost tillers in the dry, leading to thin crops.

Disease in most crops is at low levels or non-existent, but to add insult to injury, the rain has arrived to coincide with the start of flowering in winter wheat crops, which means fusarium will become a threat, so a T3 fungicide should be applied, particularly if there is still some potential in the crop.

The maize is on the whole bearing up remarkably well, considering that many crops have seen no rain since planting. However, some crops have failed to fully germinate due to lack of moisture. This is generally where a previous grass or cover crop has been harvested and removed significant amounts of water from the field before the maize was planted.

Light land
Counter-intuitively, spring crops on the lighter land appear to have endured the dry conditions better than on much of the heavier land. I can only put this down to the fact that it was easier to produce deeper and better quality seed-beds for planting on the light land, whereas the heavier land baked out too quickly and became hard in to work a good seed-bed.

This is my 40th season working as an agronomist. While we have had wet years and drought years, I am finding this the most difficult year I have ever encountered.

Usually, I am fairly certain about the approach that needs to be taken with crops, but this year has left me feeling that only with the benefit of hindsight will we find out whether the correct management approaches have been made.

I hope harvest turns out to be easy and dry, but with the way this year has gone, who knows?

It’s been an interesting season, to say the least. Two years’ worth of rain between the end of September and the beginning of March, followed by a month of dessicating wind and then searing temperatures.

At least, as I write, the temperatures have dropped a bit, the 6mm of rain we’ve had has settled the dust, and sprayer operators can actually put in a whole day’s work without fear of turning the crops brown with scorch.

I have some growers who didn’t manage to plant a single seed before the middle of March. At least 10% of my arable area has gone into uncropped or fallow.

Variety choice next year will be a case of using up what we have in the shed. My oilseed rape area next year will plummet – not just because it’s such a risky crop to grow, but also because I like it drilled early after winter barley, most of which is still sitting in bags, tempting the rats and mice.

OSR still flowering
Interestingly enough, the long hot, dry spell has allowed OSR to continue flowering and compensate surprisingly well. Some crops that looked like they were a write-off at the end of April now look as if they will be worth combining after all.

The weather has also turned what looked like it was going to be a late harvest into what may well be an early harvest, with all the spring cereals bolting into ear very quickly.

I did my normal strategy of high-azole first fungicides this year. Call it a “teenought”, “teewun” or whatever, but I’m glad I did.

I don’t think I have a speck of rust in a single wheat crop. Having said that, some of my unsown ground that went into ecological focus area fallow has volunteer wheat (Trinity) that also has five spotlessly clean leaves. Sometimes I wonder why I bother.

The recent rains have done little more than dampen the dust in the area. Wheats on all but the most moisture-retentive soils look stressed, and spring crops that went into dry seed-beds are patchy, to say the least.

Weed control in sugar beet has been particularly tricky this season, as varying emergence within the same field opened up questions on when the first herbicide should have been applied. To add to this, on lighter land, weeds just seem to have kept flushing, and with little moisture in the soil, the beet has struggled to close across the row to smother them out.

Much higher-than-usual aphid catches in the area have seen thresholds for Myzus persicae reached again recently, leading to second and, in some places, third insecticide applications. Depending on previously used products, acetamiprid, flonicamid or thiacloprid will be applied.

Discussions are beginning on farm about cropping and varieties for drilling in the autumn.

Autumn drilling date
Looking back to last autumn, the temptation is there to start drilling cereals early to ensure getting it donep before it gets too wet. In reality, if this happens, blackgrass issues on dirtier blocks will inevitably arise, opening the door to spraying areas of high blackgrass populations off and redrilling later in the autumn.

Barley yellow dwarf virus also factors into drilling date, and drilling too early will see the potential for numerous insecticide applications in the autumn if thresholds for aphids are continually met.

Keep Septoria tritici in mind when selecting winter wheat varieties. With the loss of chlorothalonil, control of the disease in a wet spring will cost more than we have previously been used to.

Finally, with less wheat in the ground this year, seed availability for next year will likely be tight, and with a dry run-up to this harvest, thousand grain weights could potentially be variable.

To ensure correct plant populations when ordering seed, it is going to be more important than ever to order in seeds per square meter, and specify a minimum thousand grain weight to ensure early vigour once drilled.

If using overwintered seed, a germination test would be prudent, and keep in mind that the test will not guarantee vigour, so these batches of seed will need to be drilled at the start of your drilling window into the best conditions possible to ensure rapid establishment.

At last, there has been some rain. Its arrival will provide a welcome boost to all crops, but we accept it will not solve all the problems from the dry spring.

Drone footage will provide a fascinating insight, albeit perhaps painful, of the variability of crops this year. This variation is largest on heavier soil types, with spring cereals ranging from not yet germinated to three-leaf stage to ear emergence in the same field.

Harvesting these crops is likely to be challenging, with grain samples containing lots of immature green grains that could affect malting or milling quality. It could be worthwhile to plan storage arrangements to keep these variable crops separate from more even crops if aiming for premium markets.

Winter wheat canopies are fantastically clean throughout. The lower leaves are likely to contribute more to yield this year due to reduced tiller numbers.

The fusarium risk will have increased from the recent rains and, while yellow rust is nicely under control, it could still flare up again.

Brown rust is an occasional problem here and, with the recent hot and dry weather, it could be an issue on susceptible varieties this season. T3 fungicides are being applied to deal with these diseases.

Orange blossom midge has appeared in small hotspots in wheat sown last autumn. For wheat sown from February onwards, whether a winter or spring variety, be on the lookout for midge as the ears begin to emerge on susceptible varieties.

It was incredible to see how spring cereal crops raced through their growth stages during the hot weather in late May. Spring barley crops range from good to bad and then to the ugly.

As awns are emerging, T2 fungicides are being applied to crops with some potential. Likewise, in spring oats, the panicles are emerging and final fungicides will soon be applied for mildew and crown rust protection.

Spring beans
Bean crops are at the early to midflowering stage and they have withstood the dry weather better than any other spring-sown crops.

Downey mildew is easy to find in susceptible varieties. More-resistant varieties will avoid the need for any expensive fungicides to control this disease.

The crops are very short, so pods are setting close to the soil, which will give combine drivers an extra challenge come harvest.

Combining peas have thrived in the recent warm and sunny weather. They too have raced through their growth stages. Aphid numbers so far have been low, but could soon increase as they begin flowering and warm weather returns. 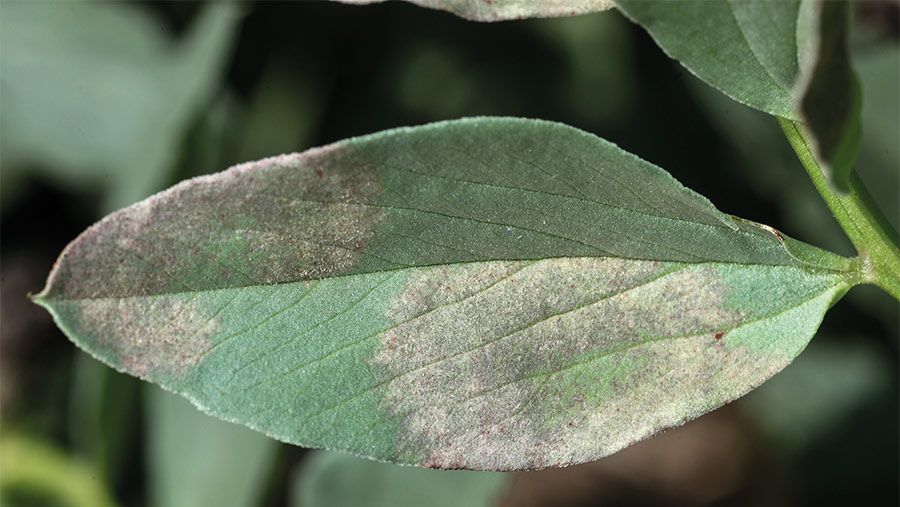 It is difficult to predict crop yields. The high levels of solar radiation may give a bit more hope to the yield potential of some oilseed rape and winter barley crops if there has been enough moisture to keep them going.

Fingers are crossed that the recent rains, combined with a cool, sunny grain-filling period, will help to maximise yields, which are likely to be extremely variable this season.