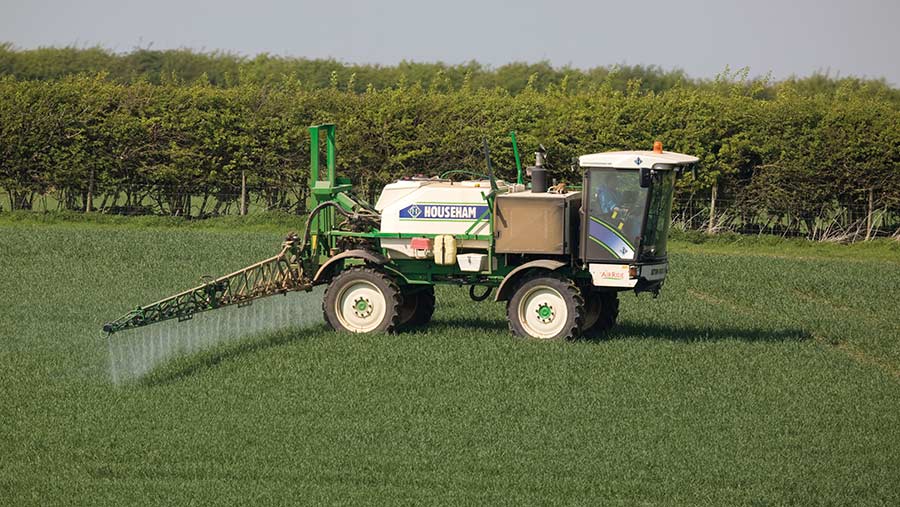 Autumn-sown cereals are coming out of winter in a better condition than last season. However, there is plenty of septoria and yellow rust foliar diseases to be found in winter wheat crops as the T0 fungicide timing approaches.

Nitrogen fertiliser has been applied to many winter crops, but in the current cool weather, crop responses have been slow and warmer conditions are needed for crops to show good growth.

Spring drilling is well under way on lighter, well-drained land, but heavier soils are taking a while to dry out, and growers have to be patient and not go too early and damage soil structure.

After a false start, spring is, hopefully, just around the corner. With increasing day length and warmer temperature, crops will start to move quickly. Overall, crops have come out of the winter much better than last year and the increase in the winter crop area has taken the pressure off spring crop establishment.

Crops are responding well to early nitrogen (N) and trace elements, which comes as no surprise given the excess winter rainfall, depleted soil reserves and recent rainfall.

Wheat growth stages vary and T0 timings are being discussed. Yellow rust pressure is on the rise and the recent frosts have been insufficient to significantly suppress the disease – particularly in backward crops that are inherently under more stress.

With the loss of epoxiconazole and a reduction in eradication within a programme, controlling yellow rust early will be critical in susceptible varieties. Winter wheat Recommended List rust ratings are now weighted, so the most recent data will have the largest influence. It is essential that yellow rust is not allowed to become established and that we remain vigilant.

Rust populations are diverse and can change rapidly, and so can resistance status. If the disease appears on varieties claiming to have young plant resistance, samples should be sent to the United Kingdom Cereal Pathogen Virulence Survey for testing. It will also be important to consider the inclusion of a plant growth regulator (PGR) at the T0 timing.

Benefits include helping to balance and strengthen tillers, as well as increasing the root mass for improved water and nutrient uptake. They can also help thicken the stem around the first internode, as well as rooting for better anchorage.

Residual herbicides have performed well where they were applied, with relatively low levels of grassweed. If there is a requirement for early contact herbicides, be mindful of allowing time for a crop to rewax after liquid nitrogen or after rolling the land.

Oilseed rape has certainly been hit hard from the earlier frosts. The crops that were carrying high numbers of larvae, combined with little or no snow protection, have been hit hardest or killed outright. Experience now suggests that cabbage stem flea beetle larvae are able to withstand freezing temperatures relatively unscathed.

As the crops are starting to move, ensure all elements are rectified to support this growth. Add boron to assist with cell wall production, magnesium for protein synthesis and photosynthesis, and molybdenum for enzyme functions with nitrogen and sulphur metabolism.

Spring drilling has yet to get into full swing, particularly on the heavier soils, which remain wet underneath. The problematic areas should be noted and considered for Countryside Stewardship for next year. With the application window now open, I would encourage you to have a look through the available options that could help manage those 3-5% of non-productive areas on the farm.

The cereals are a mixed bag. On the better, drier ground, the crops generally look well, but on the heavier soils they are struggling unless they were drilled in mid-September.

There are plenty of fields with large patches of crop missing due to the wet conditions after drilling. Most of these will be patched with spring barley, although some fields have been written off and are destined for spring cereals or maize.

The winter barley crops are generally good and forward, approaching or at GS30, and fairly clean from disease. They are yellowing as the response to the fertiliser application has been slow because of the cold conditions.

The winter wheats are again responding slowly to nitrogen applications and there is plenty of septoria present in early-drilled crops, even if they do have good septoria resistance ratings. Yellow rust is present in susceptible varieties.

The autumn herbicides have done a good job on meadowgrass and broad-leaved weeds, but there is a little blackgrass present that will need treating when the temperature warms up and the crops start growing so as not to stress them. 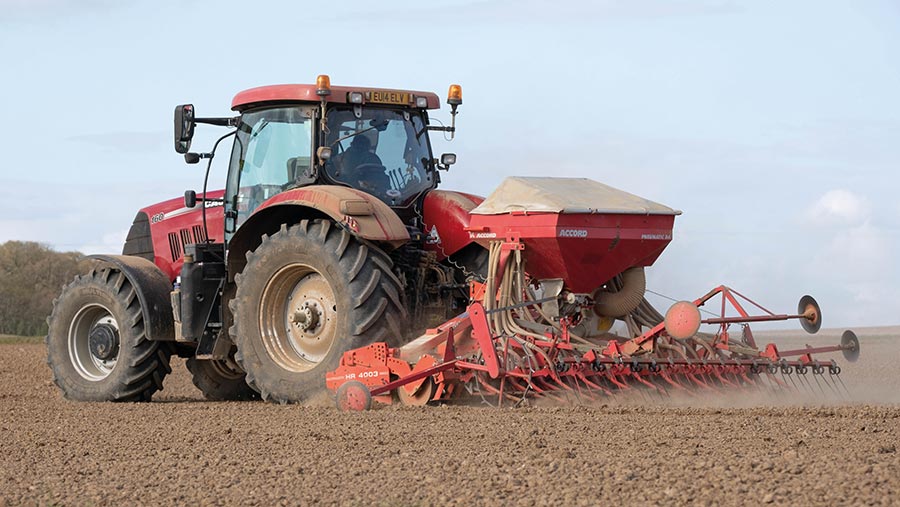 There have been a few yellow crops appear where mesosulfuron + iodosulfuron (Atlantis) was applied in the frosty weather. Volunteer spring cereals are a problem in some winter crops due to the rotation alterations following 2019’s wet autumn.

The spring cereal campaign was steaming ahead on the lighter, drier soils, but there is still plenty to be drilled on the heavier soils. Hopefully, a settled, drier period of weather now will allow this to happen.

Fields destined for maize should be sprayed off over the next few weeks to give a clean start for muck to be spread and ploughed in. It’s worth digging a few holes to see if there are any compaction issues left over from last year or 2019. Hopefully, any ruts were taken out last autumn, so there aren’t any major erosion issues.

Variety selection for maize is key and I strongly advise farmers in the South West to choose early-maturing varieties so that harvest is not delayed in the autumn. We all need to be responsible and aware of the increased pressure to reduce soil erosion from our land, and early-maturing varieties can be one element to this. There are many others, including field selection, drilling date, seed-bed conditions and soil temperature.

It’s a stop-start sort of spring in the South this year. Not surprising, really, after 450mm of rain fell between the end of October and the end of February, and below-average temperatures for March mean soils remain wet and cold.

Autumn-sown cereals have received a first dose of nitrogen and sulphur to aid tiller promotion/retention – just enough to keep them ticking along before the first main dose, which will be applied at the beginning of stem extension.

Deep-core nitrogen samples taken this spring have shown relatively low levels of residual N – on average 25-30kg less than would be expected at this time of year – no doubt a legacy of the wet winter. We will need to be very clear and decisive on the correct nitrogen dosing for milling wheats in particular.

Last season, in an ordinary yield year, protein levels were low, with many milling wheat crops failing to achieve the required 13%. As spring growth slowly gets under way crops will also be drawing on soil reserves of phosphate (P), potassium (K) and magnesium (Mg) – much of which will be unavailable until soils warm up.

Foliar applications of P, K and Mg at this time of year have shown to be very beneficial, filling the gap between crop requirement and soil release.

T0 applications on wheat are being planned for the end of March, to coincide with leaf four emergence. Currently, crops are showing high levels of overwintered Septoria tritici on lower leaves and yellow rust, to a lesser extent.

Given the downgrading of several varieties on the AHDB Recommended List and the cool maritime conditions present in the South, there remains a significant risk of yellow rust infections becoming established in the near future.

Therefore, a TO combination of an appropriate azole/strobilurin plus multisite should be considered to clear out any overwintered or latent infections, as once these infections take a foothold, they become increasingly difficult to control.

I sometimes wonder if my advice gets lost in translation. The recent spell of good weather has spurred everyone into action, with the first top-dressing of fertiliser being the activity of choice. Oilseed rape and winter barley have been the main priority, followed by second wheats and, finally, first wheat.

All this advice has been carefully described with the firm caveat to only do this if conditions allow. That seems clear to me, but many fields now look like they have been used for tank manoeuvres, with tramlines making respectable trenches. On the positive side, they are all happy that the first round of fertiliser is now complete.

Winter wheat crops look remarkably well and full of promise. The airwaves are filled with chatter about the impending Armageddon that is yellow rust. Wise sages are telling us a pre-T0 (a new timing – maybe we should christen it T-1) will be essential.

As agronomists, we are all prone to be risk-averse, but I cannot believe that we can justify this early intervention. As such, I am adopting the ostrich approach and burying my head in the sand. Yellow rust treatment, if required, will be delayed until GS30.

Continuing in this grumpy vein, the number of elixirs of life that are now available to buy off the counter for crop health is enormous. These range from stimulating host defence to altering soil flora and fauna, and ensuring that every trace element on the periodic table is available to the plant. How we ever grew any crop without these is a miracle.

Needless to say, there will be no mass vaccination process for my wheats. Free-living nematodes (FLNs) appear to have enjoyed the winter and, once again, we have patches present in several of our light land wheat fields.

Soil samples sent off for confirmation nearly always come back with FLNs levels that – as described by Fera – “would not cause economic damage”. As I look at the bare and stunted patches, I think this statement probably needs reviewing.

Winter oilseed rape crops have been absolutely hammered by the recent weather and the pigeon blitzkrieg. The only crops that are looking well are the ones that received nitrogen at the end of January. I am sure the recently applied nitrogen will soon be reflected in new growth.

Although we escaped the worst of the cabbage stem flea beetle damage, it is still easy to find larvae in the petioles. I fear this means we are not over the worst of this pest yet. Despite the widespread defoliation, we are planning to apply a growth regulator to most of our early-drilled crops.

I have little faith now in the effectiveness of triazoles against light leaf spot, but feel that an added bonus of growth regulation makes their use economically justifiable in big crops. Application will be targeted later, waiting for a good regrowth to occur.

Winter barley crops still look very well and will be the focus of attention in the coming weeks, as we apply the main fertiliser dressing before the end of the month. The first fungicide and growth regulator will, hopefully, be applied before Easter. All crops have a wide range of diseases and the initial fungicide will be based around a robust rate of prothioconazole.

Winter beans are recovering from the harsh frosts and look very well. A graminicide will be applied to tidy up grassweeds in the coming weeks. I will then have a conversation with myself about the use of bentazone on fields where broad-leaved weeds are still an issue.

It is the inconsistent performance of bentazone and its high price that leads to my inner turmoil over its use, but I will, once again, attempt to use it on certain fields/areas.

Spring drilling is well under way on the light land, but, sadly, we are still several weeks away from being able to drill the heavy, low-lying fields.