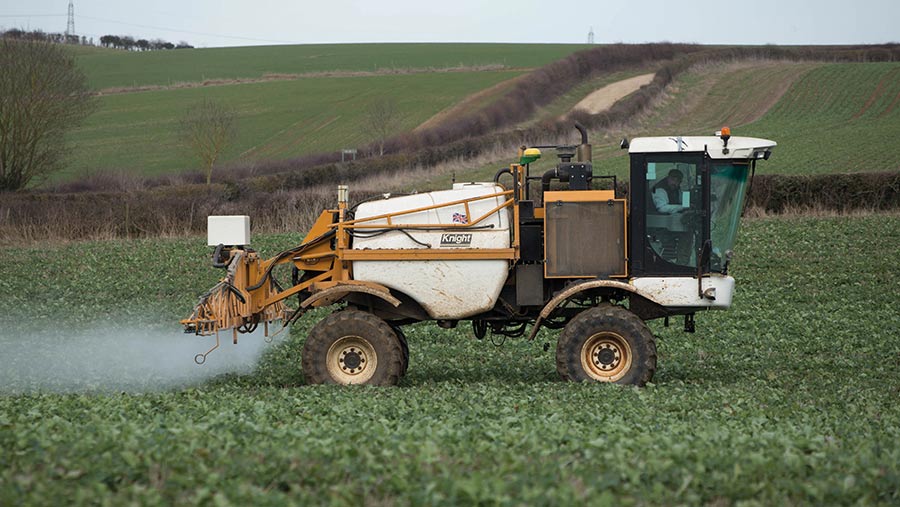 The unsettled weather continues to frustrate, preventing sustained amounts of field work, and the biggest concern in the south-west is that a lot of barley yellow dwarf virus sprays still have to be made.

One benefit of the wet conditions is that the mild start to November has helped later-sown crops establish quickly, although it has allowed slugs to remain active as well.

Recent days have seen soil temperatures falling, so thoughts have turned to applications of propyzamide to control grassweeds in oilseed rape and winter beans.

Since last contributing the weather has been pretty unco-operative, with the odd dry day, but not enough consecutive dry days to enable sustained amounts of field work.

The maize harvest is complete, but there are still wheat crops to be drilled into maize stubbles so it is still too early to say we are 100% drilled up down here.

Fodder beet crops both for livestock and anaerobic digestion are now in the process, and early indications are of a reasonable-sized crop, despite having been subjected to two fairly hard droughty spells during the growing season. A few of these crops, once harvested, will be destined for winter wheat, but most will go to maize next spring.

The biggest concern at present, with the inclement weather, is that an awful lot of planned barley yellow dwarf virus (BYDV) sprays are yet to be applied. This is particularly concerning, given that aphids are being caught in large enough numbers to be of concern and many crops were drilled significantly earlier than a year ago, thereby heightening the risk to the crops from this extremely damaging virus.

The south-west always has a heightened risk compared with other areas of the country. This is largely driven by two factors: our mild climate and the whole region’s proximity to a coastline.

Advice must be, at present, to get on to fields at the first available opportunity, prioritising those fields that were drilled earliest and have not yet received a treatment, and then those later-planted crops and earlier-planted crops that are due a second application.

Wheat crops that did not receive a pre-emergence herbicide should also have a post-emergence treatment along with the planned BYDV application, particularly if grassweeds are expected to be a problem.

This again should be quite a high priority as earlier planted crops with no herbicide applied can end up dirty beyond control come the spring. Trying to remove large weeds in the spring often ends up being more expensive with less good control.

With much of the autumn work at or near completion, thoughts will be turning to spring cropping.

It is probably worth mentioning at this stage that there have been all sorts of problems with spring cereal seed crop this year, from crop rejections through to poor germination results on many crops. This is going to lead to shortages of spring cereal seed, particularly if demand is high.

Hopefully, with a larger winter cereal acreage planted this year, the demand for spring cereal seed will be dampened a bit compared with last year, but if it isn’t, supply will be very tight indeed.

A predominantly windy November has allowed land to dry to the point where some late drilling of winter wheat, beans and spring barley has been able to take place, even on some heavier soil types, during the past fortnight.

Lessons learned during the terribly wet autumn conditions of 2019 have been applied, with patience being the key so that crops were not forced into poor quality seed-beds. While the persistent windy weather has been good for drying soil it has been difficult to keep on top of spray workloads.

However, the large backlog of spraying that accumulated during October has now largely been cleared. Considering the wet October, crop establishment has been surprisingly good across all soil types with only some headlands on heavier soils struggling.

The level of grassweed control in winter wheat and barley has been influenced significantly by the timing of residual herbicides.

Where the planned programme for pre-emergence and early post-emergence herbicides were able to be applied on time, the level of blackgrass control has been good.

Where the timings were delayed, and especially where the planned pre-emergence herbicide was actually applied post-crop emergence, then the level of blackgrass control has fallen significantly.

It has been surprising to see how well the herbicides have performed on more cloddier seed-beds although there is still time for these clods to break down to allow more blackgrass to emerge.

The mild November has helped later-sown crops establish quickly. However, it has also allowed slugs to remain active as well. The grazing pressure from slugs has been greatest in later sown crops of wheat following oilseed rape. However, slugs have also caused problems in some crops of second wheat and winter barley.

Various diseases such as yellow rust have enjoyed the mild damp conditions. Net blotch levels are particularly high in some crops of winter barley, with the highest levels in min-tilled or direct drilled crops following spring barley due to higher inoculum from spring barley volunteers.

Oilseed rape crops continue to impress. Even those sown in late September have established well. The wet October has seen phoma levels increase during November, with a fungicide applied where thresholds have been exceeded.

Propyzamide is being applied for the control of grassweeds such as blackgrass and bromes, but will also serve to control the ever-emerging spring barley volunteers.

The canopies of oilseed rape sown before mid-August are now particularly large. These crops will need careful management in the spring with regards to the dose and timing of growth regulator and nitrogen fertiliser.

It will be a nice problem to have considering the difficulties of establishing oilseed rape in recent years.

The Spanish say “Manana”. Jamaicans say “No problem”. In Swahili it’s “Akuna matata”. Aussies say “She’ll be right, mate”. The Met Office says “After next week we’ll be going into a spell of high pressure and the weather will turn settled….”

All very positive, but the Met Office’s prediction has turned out more comprehensively wrong this year than any of the others. I’m still waiting for this fabled settled spell to happen.

This, obviously, is only relevant to any outstanding work that needs to be done. Follow-up herbicides, aphicides, amides for grassweeds in OSR and any as-yet-undrilled wheat crops. All pretty important stuff.

Reaching into the befuddled depths of my brain I seem to remember one year (autumn 2018) out of the last seven or eight where we’ve successfully managed to get everything wrapped up before Christmas.

This creates a challenge for operators, and from what I can see, it’s those who are well (over?) kitted up, and those who snatch any possible opportunity who end up staying ahead of the game.

Most of what’s in the ground actually looks OK. Ironically, it’s the stuff that went in at the Tod Hunnisett Text-Book Timing that has suffered most with the 280mm of rain that landed on it post-drilling. Ironically again, it was because the seed-beds were so good. The landwork walks OK, but the headlands, and any ponded areas, are untravellable. But at least it’s in the ground.

The BYDV thing is interesting. Aphid levels vary from site to site, but overall I would say they’ve not been horrendous. Just as well, because there’s been little opportunity to do anything about them.

Somebody should invent something that coats the seed, gets into the growing plant, and protects it from the inside while it’s vulnerable, without affecting anything else that’s around it. Now there’s an idea….

With temperatures now dropping off, it’s time to think about applications of propyzamide to control grassweeds in oilseed rape and lucerne as well as pre-emergence in winter beans, if they have been drilled. However, to protect water quality field drains shouldn’t be running at the time of application.

In oilseed rape, where halauxifen-methyl + picloram has been applied earlier for broad-leaved weed control, then straight propyzamide will in most cases be enough. Where no broad-leaved herbicide has been applied, and there is the weed burden there to warrant it, propyzamide + aminopyralid will be applied. Prothioconazole will also be added where the control of light leaf spot is needed in the crop. 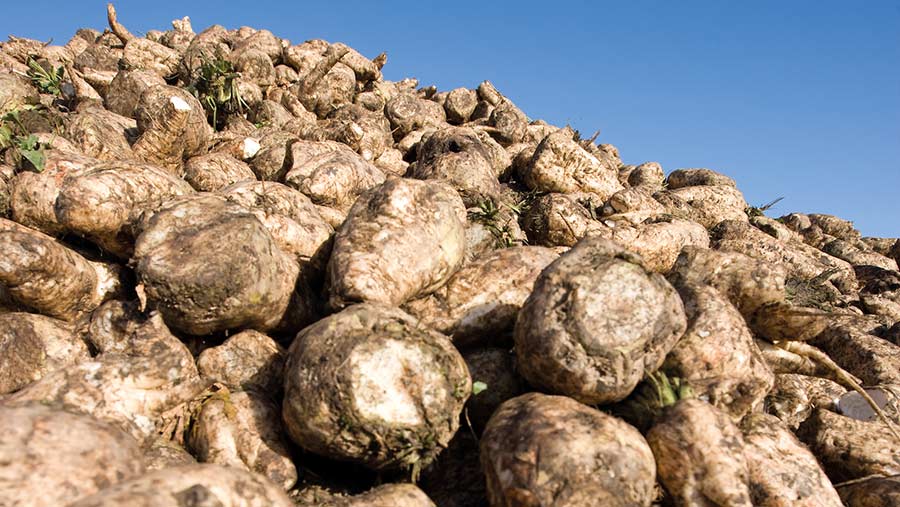 In previous years, where wetter soils have factored throughout later autumn and into winter, residual herbicide top-ups have worked well in wheat and barley at reducing grassweed pressure for the forthcoming spring.

With autumn grassweed pressures evaluated and mapped, residual top-up applications have been under way using flufenacet as the base active ingredient, and either diflufenican or pendimethalin as the mixing partner, depending on broad-leaved weed pressure and label restrictions following the initial residual herbicide application.

Where there is the need to apply an insecticide for BYDV following a T-Sum 170 calculation, and field inspection, lambda-cyhalothrin has been tank mixed with the herbicide.

With planning getting under way for the spring, very variable sugar beet yields are in some cases altering cropping plans for the future. Where growers are yielding significantly less than usual, and have come to the end of a contract, renewal is not a financially viable option, and the search for alternative break crops is on.